Home » Who to Watch in the CBD and Cannabis Space

All things considered, it’s a good time to get into the cannabis-related industry.

The past year has left people more stressed and anxious than ever before, seeing spikes in all things cannabis and CBD. That coupled with marijuana being newly legal in New York State has made it one of the most desirable sectors to enter at the moment (even Jay-Z couldn’t resist).

But for most of the newer companies on the market, their successful timing was merely a stroke of luck. Acquiring a license for cannabis businesses is a long process (Farnsworth Fine Cannabis’ has been in pursuit for three years), and any sort of new product development naturally takes time. As Bruce Wilpon of Fountain brand, which offers hard seltzer and CBD-infused sparkling water, put it, “Serendipity and luck helps a lot. We’re just trying to provide a little bit of relief and joy and fun.”

Below, a few of the CBD and cannabis companies to know.

All of the Fashion at the 2021 BAFTA Awards

“The first time that I came up to the Berkshires to visit Adam, in 2011, Colorado had just legalized [marijuana] and I grew up in Park City, Utah, and so when I arrived in Great Barrington, ‘I thought this is the perfect place for a pot shop, it’s just like Park City,’” Farnsworth says. He had been working with Andre Balazs at the time when marijuana was legalized in Massachusetts, which he says taught him how to go about creating the kind of luxury atmosphere they’re striving for with the dispensary.

“At Andres’ we were creating really sophisticated playgrounds for adults. So I learned the importance of the setting and the environment and to really create an immersive experience,” he says.

Farnsworth Fine Cannabis has a main street entrance — in a building that reminds Farnsworth of Prada Marfa — which is one of their main steps toward making buying cannabis a more luxurious experience than many of the pot shops across the country.

“It just feels like you’re walking into any other kind of shop,” Farnsworth says. Lippes says they have a partnership with The Webster coming up, with several others in the works.

“It’s really about the brand that we are developing; this is a brand that we can take forward, whether or not we open other locations,” he says. “It’s like walking into a small Bergdorf Goodman, but marijuana.”

The company is also pleading that 65 percent of the business’ staff will be made up of LGBTQ+, women, people of color and veterans.

“Marijuana has negatively impacted certain committees for so long. And then for it to be suddenly legal when people had been locked up three years ago, it’s just so insane,” Lippes says. “We want to do whatever we can do to support those communities.” 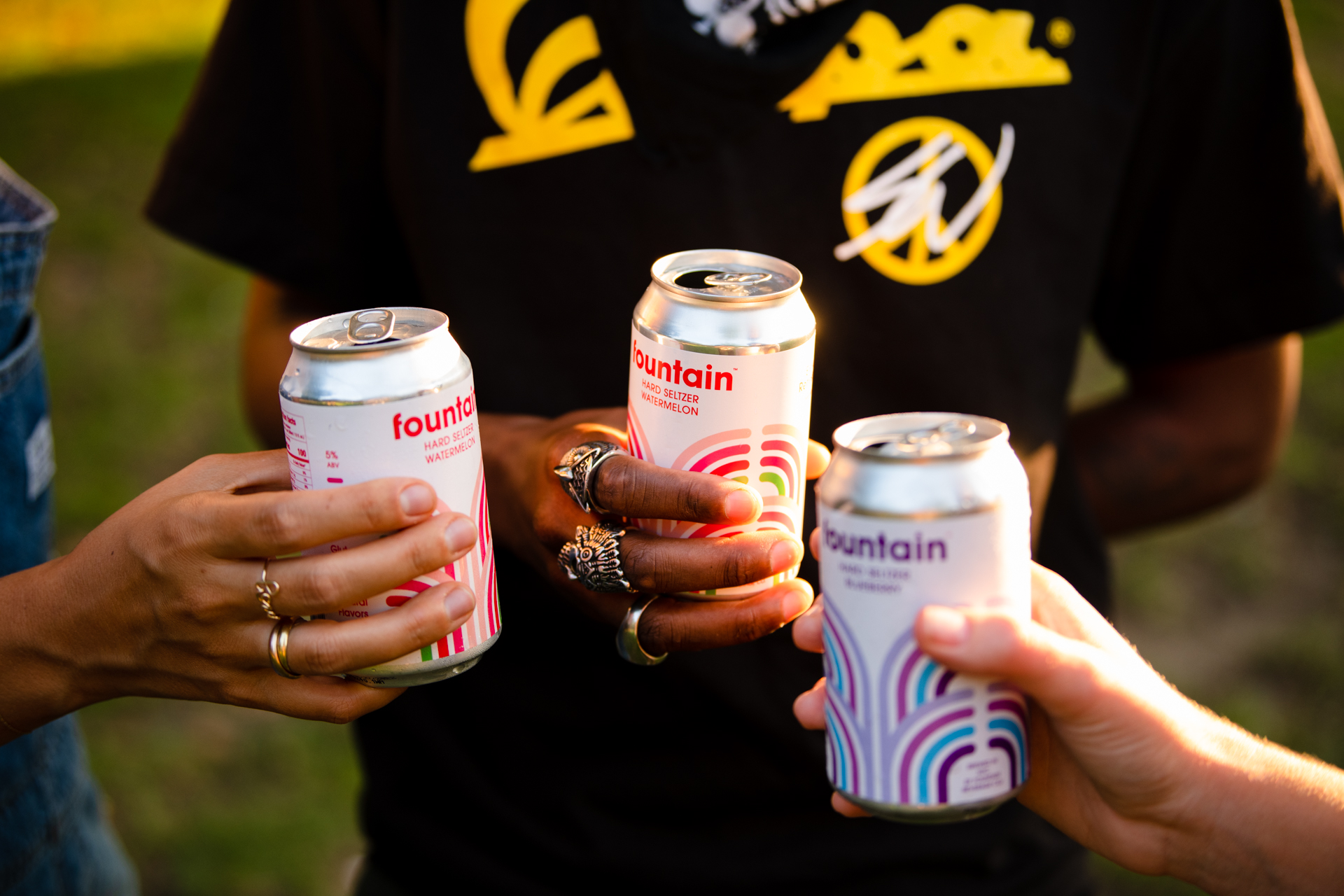 Created by Bruce Wilpon and Tomas Larsson of Brooklyn-based craft beer company Ebbs, Fountain is a line of craft-made hard seltzer and hemp-infused sparkling water, aimed at bringing the craft approach to the ever-growing love for hard seltzer and all things CBD.

“People are drinking more consciously. There are more options for mocktails and so on as well. We thought that there was a chance to make something that had a little bit more design intent to it and had a lot more attention to the flavor profile,” Larsson says.

Launched during the pandemic, Fountain hard seltzer is 100 calories per can with 5 percent ABV in flavors like passionfruit, tart cherry, mango and pineapple. The CBD water is infused with 20 mg of full-spectrum CBD grown and processed in New York State, has zero sugar (unlike many other CBD drinks) and is made in cucumber, grapefruit and lime flavors.

“As we were brewing beer, you couldn’t not notice the onslaught on White Claw and Truly and it being much more than a fad,” Wilpon says. “Overall, people’s drinking habits have been changing over the last decade for sure. People are seeking out less sugar, fewer additives, fewer non-natural ingredients — and fewer calories. I think people aren’t switching off alcohol but they’re switching off calories. So as brewers, it just became something we needed to understand.”

They describe Fountain as a real New York brand, with a focus on design and craftsmanship that is unique in both the hard seltzer and CBD water space.

“We were understanding that people are abandoning things for products that have a benefit. So CBD was a natural place to look,” Larsson says. “It’s a refreshment, its water and it’s an elevated expression of a beverage.

Overall, Fountain aims for sophistication. “It’s clear liquid, elevated in flavor in design and taste profile, and craft, because that’s how we make stuff,” says Wilpon. 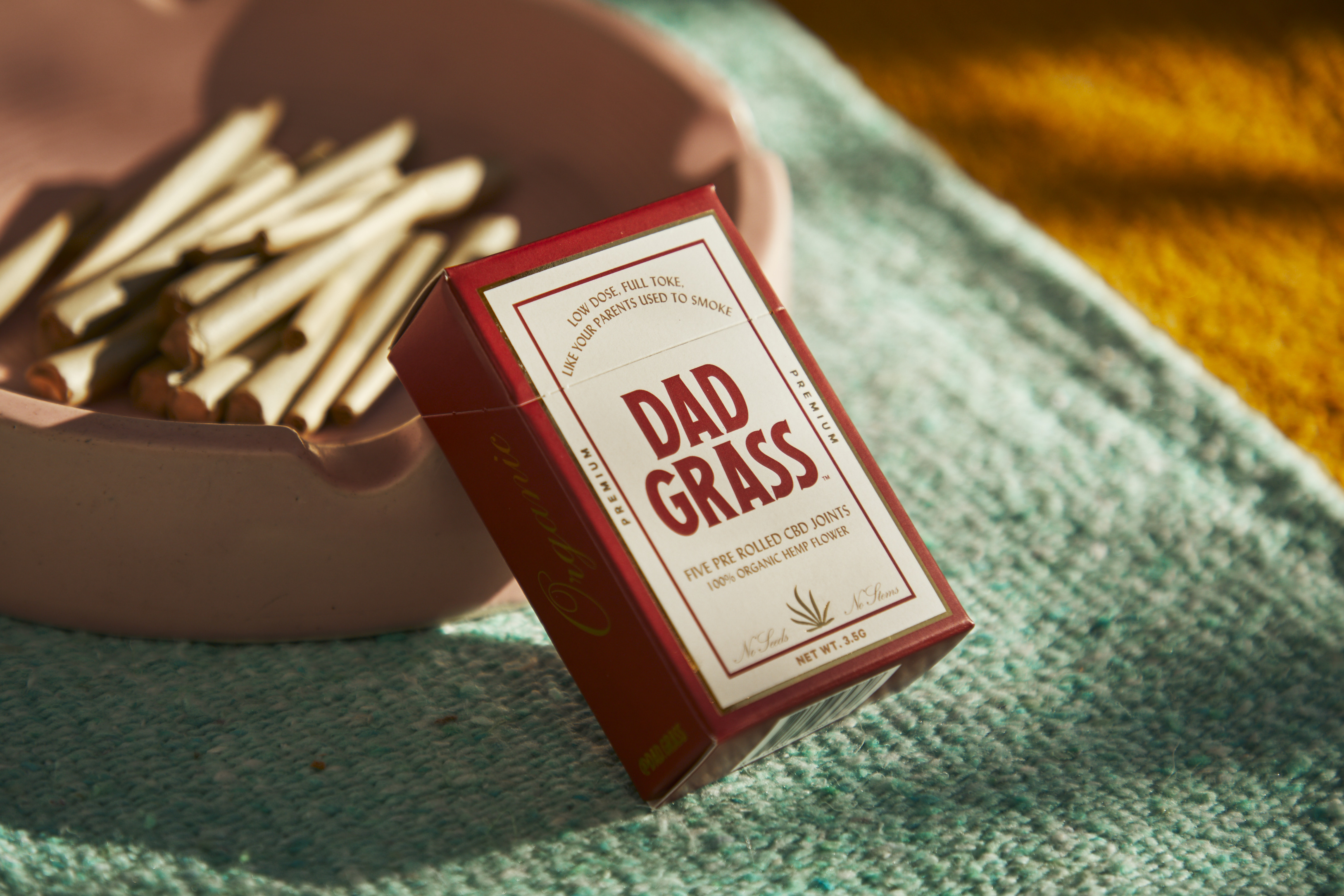 Joshua Katz and Ben Starmer were longtime Levi’s colleagues who began to notice that weed these days was being manufactured to be more and more potent — and not in a good way.

“Today’s weed gets you too damn high,” Starmer says. “That’s really when Dad Grass came about as a concept, that we wanted to provide a really high-quality cannabis offering, but much lower dose. Because we think that the equivalence of potency and quality is a false equivalence, and you don’t really see that in many other industries.”

The pair intended to launch a cannabis line, but ended up discovering hemp joints and finding it to be exactly the experience they wanted — with the ability to be shipped via USPS, due to being federally legal.

“I was very skeptical,” Starmer says. “Hemp for me was braiding hemp necklaces in seventh grade. But in late 2019, we were sent some samples, and they were absolutely stunning. It looked like weed, it smelled like weed, and we rolled some up and sure enough, it smoked like weed. We were sitting right there in Josh’s office having a couple puffs, looking at each other and going, ‘All right.’ The anxieties of the day have melted away and things were feeling good. ‘I’m not exactly high but I’m not not high. ‘Maybe this is exactly what we were looking for all along.’”

Dad Grass is “low dose, full toke” CBD joints “like your parents used to smoke,” says the branding. The two worked within Levi’s vintage clothing division, which they say had a more entrepreneurial bent that focused heavily on branding, something that is signature to how they approach Dad Grass.

“I think in a lot of ways [Levi’s vintage clothing] informs some of the things that we do at Dad Grass,” Katz says. “Part of it just that hyper nerdiness over products. It’s not about complexity. It’s about attention to detail.” 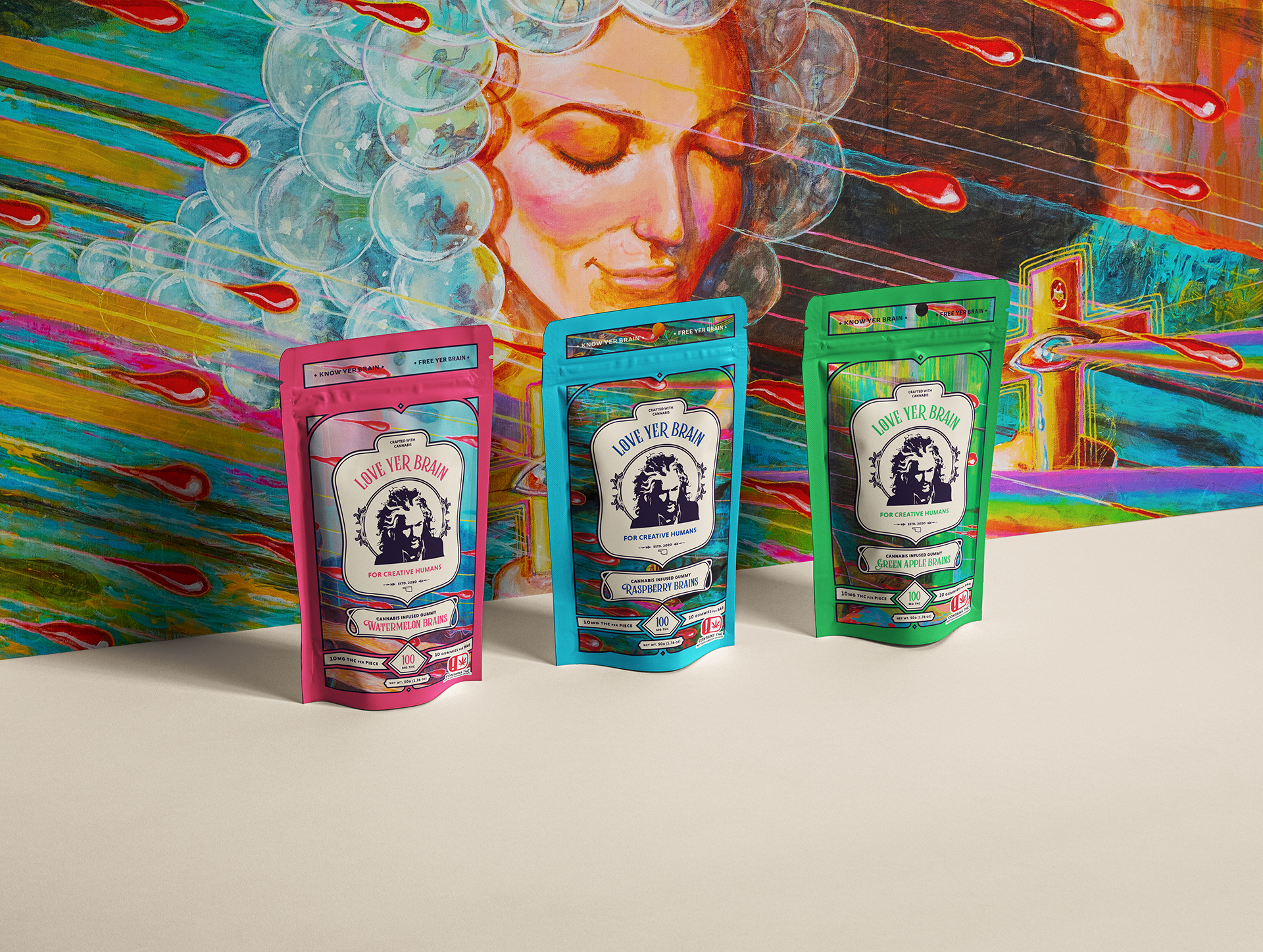 Flaming Lips frontman Wayne Coyne has launched Love Yer Brain, his own line of THC-gummies, in his home state. Named for one of the band’s songs, the brain-shaped gummies (tagline: “for creative humans”) are being sold in the Oklahoma medical marijuana market (and produced in Muskogee) at eight different retail locations.

The line includes three different flavors, available with two different doses of THC per gummy (10 mg and 25mg). The band is marking the launch with a sold-out concert performance of their 2020 album “American Head” on April 20 at The Criterion in Oklahoma City. 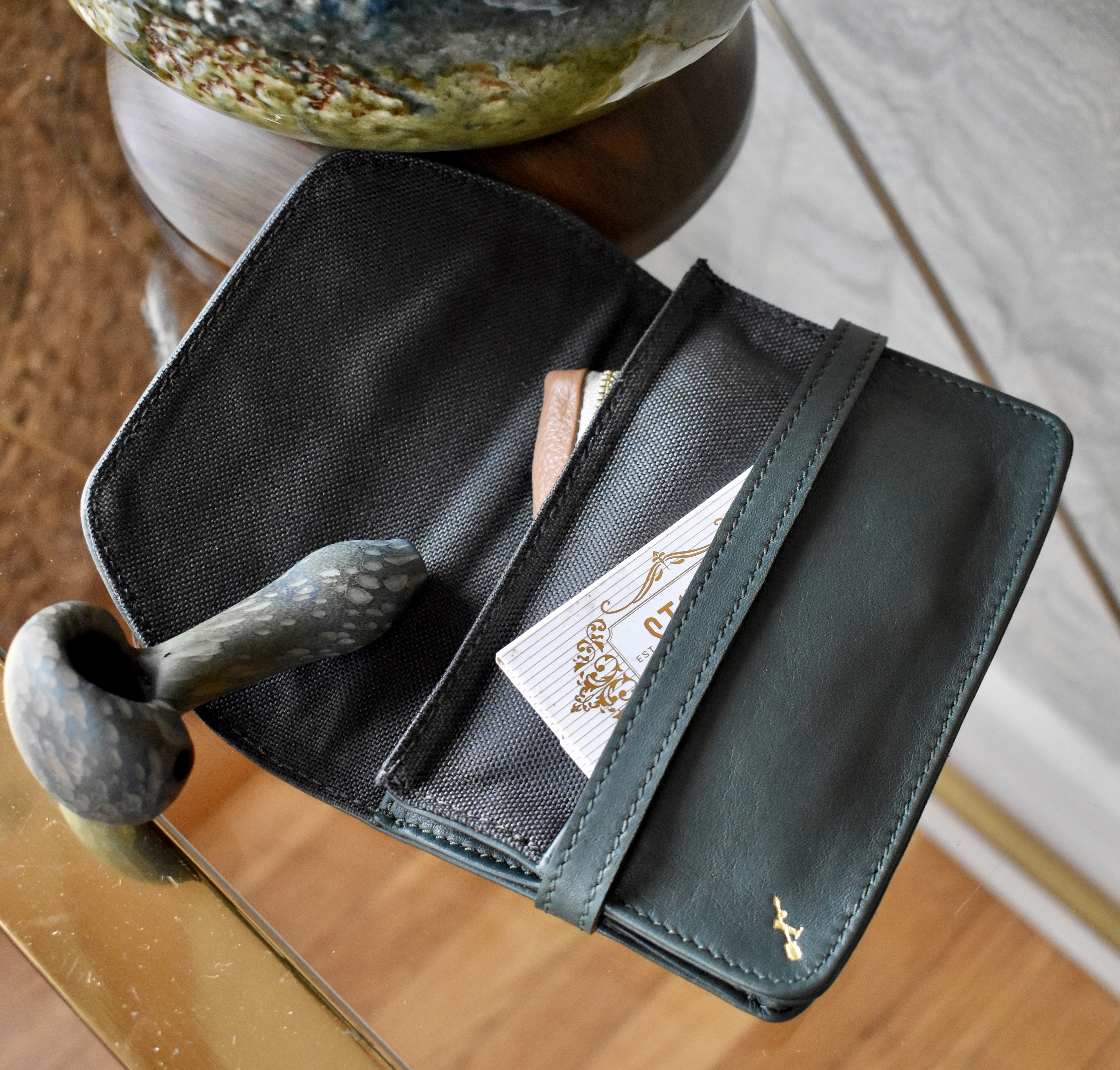 Berkshires dispensary Rebelle is approaching the cannabis industry with a wellness-centric angle and feminine design aesthetic. This week, the brand is launching a line of leather accessories with usability of their core product offering in mind. Their first accessory, the forest green Jerry Bag (named for Jerry Garcia) launches on April 20 for $195 and features smell-proof carbon lining.

The line will initially be sold in store and online, before going wider later this fall. The Rebelle team is led by three women, whose collective experience spans finance, magazine publishing and luxury fashion retail.