Home » Lifestyle » Why do sad songs make us happy?

American author Susan Cain’s first book QUIET: The Power of Introverts in a World That Can’t Stop Talking became a bible for many introverted souls. It focused not on the idea of shyness, but a deeper look into the ways in which introverted people respond to external stimulation and environments, and how the world is shaped by approaches that favour extroverted personalities.

In Bittersweet, she starts off with an intriguing idea: why are we so taken with sad songs? Referencing songwriters such as Leonard Cohen and Nick Cave, she explores the reason that she is so drawn to music with melancholy – and alights on the “bittersweet”; those rare moments we experience joy and sadness at the same time.

Cain has a quiz that readers can fill out to see how they fit on the bittersweet spectrum, and argues that certain people are more attuned to both the dark and the light. She sets off on a journey to find them, which takes her from Pixar director Peter Docter, philosopher Alain Botton and Japanese haiku poet Issa to “the immortalists” who choose to believe they can defy ageing and death. Cain is an expert at connecting disparate ideas in a readable and satisfying style, but bubbling underneath it all is her constant questioning of the Western psyche, American obeisance in particular, and what she refers to as the “tyranny of positivity”.

Her mission is a call to arms for an elevation and acceptance of certain feelings usually unspoken or hidden, such as sadness, attachment or longing, to see what they can bring to the world in unusual ways. What happens when a boss integrates sorrow rather than anger into her leadership style? She dissects the term “loser” and how it has evolved into a statement of shame rather than a person deserving compassion. She places these ideas in the framework of cultural aspirations where, despite the public smiles and the promoted successes, people are becoming more depressed and suicide rates are rising, particularly among young people. 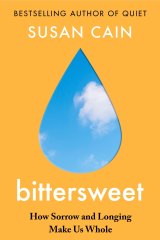 Bittersweet: How Sorrow and Longing Make Us Whole by Susan Cain.Credit:

Weaving through the research is an insight into Cain’s own family experience. She explores an idyllic childhood with her mother, who changed in Cain’s teen years and couldn’t bear to be separated from her daughter. Cain’s mother called her every day when she left for Princeton, abusive, ruthlessly trying to control her life. Cain escaped the relationship by (accidentally) handing her mother written diaries where she had poured out her rage and sadness – the message was clear. But in later years, with Alzheimer’s, her mother could not remember the arguments and pain of their relationship, and so returned to the doting and loving mother of her younger years that Cain had yearned for. As she holds her mother’s hand and is told how much she is loved, it’s the true taste of bittersweetness.

Cain also examines epigenetics and how trauma is passed down through the generations. Her grandparents’ families were killed in the Holocaust, and she carries the huge burden of their grief along with her own, but she experiences this pain as transformative. And this ultimately is what Cain comes away with – how you can’t attain the sweetness of life without the essential bitter element.

In the end, she transposes this to life’s important questions: how we live and how we die. After examining common responses to bereavement – the urge to let go or move on, the hiding away of sadness – she finally finds most comfort instead in the staying with it and the acceptance that everyone has a death sentence from the day they are born, and how, rather than being morbid or frightening, that knowledge can spur compassion and celebrate the adventure as it unfolds.

Bittersweet: How Sorrow and Longing Make Us Whole by Susan Cain is published by Penguin, $35.00.