Home » Lifestyle » Why Minions: The Rise of Gru has the best movie soundtrack since Shrek

Why Minions: The Rise of Gru has the best movie soundtrack since Shrek

When Grammy Award-winning producer Jack Antonoff tweeted that he “went very hard on this Minions soundtrack,” he wasn’t kidding.

Typically, when we think of music in movies, we immediately conjure up dramatic Hans Zimmer instrumentals, or hits re-purposed for a killer opening scene – like The Rolling Stone’s Gimme Shelter playing over Jack Nicholson’s thick Boston accent in The Departed. 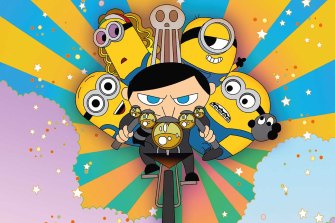 The Minions: The Rise of Gru soundtrack

But soundtracks can also exist as standalone pieces of art themselves – think Kendrick Lamar’s Black Panther album, which was a conceptual body of work inspired by the 2018 Marvel film, and featured chart-topping songs like All the Stars.

And now Antonoff has the done the same for Minions: The Rise of Gru, the latest instalment of the Despicable Me franchise. Released this weekend, it collected $8.2 million at the domestic box office but its accompanying soundtrack, under Antonoff’s helming, has taken things up a level.

So, what is it about the music that’s causing as much of a stir as the film itself? Firstly, it has the all-important component of any catchy animated soundtrack: fresh takes on old hits that keep both parents and children entertained.

The songs on the soundtrack are a mix of new releases and renditions of ’70s classics, like Thundercat’s psychedelic funk-revamp of Steve Miller Band’s Fly Like an Eagle, or American rapper Tierra Whack’s auto-tuned version of Black Magic Woman.

And when the musicians featured on the album are as diverse as Diana Ross, Phoebe Bridgers and Brockhampton, the indie crowd is forced to pay attention.

Antonoff created a Minions soundtrack that’s funky, bright and upbeat, guided by its 1970s influence – the same era the film is set – and boasting a number of dance-inducing tracks.

Even Nancy Sinatra’s ominous Bang Bang (My Baby Shot Me Down) is kicked up a notch thanks to the trumpets dispersed between Caroline Polacheck’s vocals.

The lead single, Turn Up the Sunshine by Diana Ross and Tame Impala, marked Ross’ highest debut on the Billboard charts since 1989. Since its release last month, the song has reached 3.3 million streams on Spotify.

It’s certainly not the first time a production studio has invested in high-profile musicians for its accompanying soundtrack. The Lion King (1994) won two Academy Awards for its music, which featured Elton John, Frozen (2013) won the Oscar for best original song for its lead single, Let It Go, performed by Idina Menzel in the film, and Despicable Me 2 (2013) reached number one in the charts for its lead single, Happy, sung by Pharrell Williams.

These films also all grossed over one billion dollars at the worldwide box office.

The correlation between the success of films and their soundtracks could be explained by studies which have long shown the strong relationship between memory and music.

“Compositions can contribute just as much to the story’s meaning, influencing our perception of film characters, the recalls of details of a film scene, and how we perceive friendly and aggressive behaviours,” one study published in the Psychology of Music Journal said.

While it’s not the first successful soundtrack within the Despicable Me universe, this Minions album has more in common with the Shrek franchise and its iconic sound.

Both mix new music trends with old songs, and introduce young audiences to the artists adored by their parents’ generation.The second instalment to the ogre franchise, Shrek 2 (2004), included a soundtrack of high-profile artists, including David Bowie, Nick Cave and the Bad Seeds, and Tom Waits.

Accidentally in Love by Counting Crows was the soundtrack’s lead single, charting on Australia’s ARIA singles chart for 13 weeks. It peaked at number 11, and was later nominated for best original song at the 2005 Academy Awards.

But the difference between the two soundtracks, and perhaps a nod to the diversification of mainstream music in the last 20 years, is that the Minions album features a broader range of artists of varying backgrounds and genres.

K-pop star Jackson Wang’s track on the album, Born to Be Alive, includes verses in both English and Mandarin. Other artists include Colombian-American singer Kali Uchis, Chinese pop star G.E.M., and rapper RZA.

Whether you like the music or not, Minions is working its hardest to capture the attention of audiences both young and old, and from countries across the globe – and with an artist list like this, it just may well be working.