Why separating can be the secret to saving a marriage

Separating to save your marriage might sound like a contradiction, but relationship experts say it can actually work.

Late last month, it emerged that actors Ben Stiller and Christine Taylor had quietly reunited after a five-year hiatus. Jason Momoa and Lisa Bonet followed suit this week, announcing they were reversing their January divorce plans to continue working on their marriage after 16 years together. 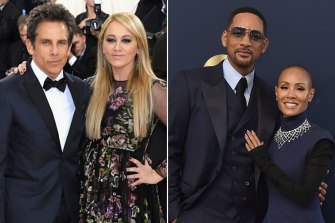 Ben Stiller and Christine Taylorl last month reunited after a five-year hiatus, while Will Smith and Jada Pinkett Smith decided only to come back together once they found happiness independently.Credit:Getty Images

So are conscious separations the new conscious uncouplings?

The story of famous boy falling in love with famous girl, before falling out of love only to realise that actually, yep, it was love all along, is a tale as old as time. We’ve seen it play out with Prince William and Kate Middleton, Will and Jada Pinkett Smith, Patrick Dempsey and Jillian Fink, Pink and Carey Hart, Miguel and Nazanin Mandi, Adam Levine and Behati Prinsloo, and Australia’s Andy Lee and Rebecca Harding.

Relationship coach Megan Luscombe says far from being just a habit of the rich and famous, counsellors and psychologists see couples choosing to separate with intention on a daily basis.

“These kinds of relationship dynamics are actually really common, it’s just that people don’t talk about them because of social stigma and judgment,” she says. “A lot of people see separating as a relationship breaking down but for a lot of couples it’s actually a strengthening component.”

Psychotherapist and relationship coach Angela Barrett agrees, saying separation offers people “the opportunity to develop a more conscious relationship with themselves, understanding their own part in the relationship issues or problems, and then coming back with awareness”.

Both say major life events, like leaving university, career changes, children growing up, health issues or being at different life stages, are common triggers for separations.

Barrett agrees. “The kids aren’t around as much and you find yourself having to remember why you got together in the first place. That leads to couples having to reinvent and reignite their relationship, and not everybody can do that.”

For Stiller, the break from his 18-year-long partnership afforded him and Taylor time to learn more themselves.

“We have an unrealistic expectation of how happy we should be and how happy our partner should make us.”

Actor Will Smith shared a similar story about his break from Jada Pinkett Smith, explaining the two decided to return to their marriage only when they had both found happiness independently of one another. “Then we were going to present ourselves back to the relationship already happy versus demanding that the other person fill our cup,” he said.

Luscombe says while separations may shock children, for parents the decision is usually years in the making.

“A couple might wait until their children are 15 or 16, but they will have been talking about it since the children were 8 or 9,” Luscombe says. “There’s a lot of planning there.”

For Barrett, the most important thing is communicating with children and navigating the change respectfully.

“If you can do it so children don’t become collateral damage that’s better than children experiencing conflict and not ever seeing modelling of how to have a healthy relationship,” Barrett says.

The Duke and Duchess of Cambridge infamously split after they graduated university and were trying to find their place in the world. Later, Kate said the time alone allowed her time “to find out things about yourself that maybe you hadn’t realised.”

Luscombe recommends couples work with an expert to create a road map prior to embarking on a separation. This should cover how often to check in with each other, sexual exclusivity, managing children, living arrangements and how long to be apart.

“The fact that they’ve planned it shows their commitment to making the relationship work,” Luscombe says. “People are seeking help proactively and doing it from a place of commitment.”

Barrett, who works specifically with individuals during periods of separation, agrees.

“We have an unrealistic expectation of how happy we should be and how happy our partner should make us,” Barrett says. “We seem to have this idea that our happiness can be outsourced, but it can’t. That’s why doing individual work in a relationship is so vital.“