Well, that wasn't hard to pick. In a year when Black Lives Matter protests are raging around the world, it was a safe bet the Archibald Prize would go to an Indigenous artist.

Two years ago, Vincent Namatjira was considered unlucky when his entry was passed over in favour of a stiff, mannered self-portrait by Yvette Coppersmith. This time around, the Trustees of the Art Gallery of NSW took their chance to make amends. 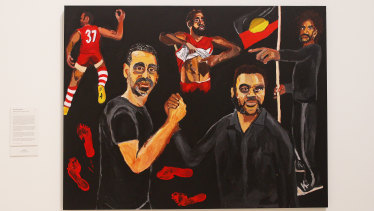 As Australia's highest profile visual arts event there's always a good deal of politics in the choice of an Archibald winner. If this meant a magnificent work had been overlooked in favour of a politically correct one, it would be only the latest controversy in a competition that thrives on scandal.

Instead, Vincent Namatjira's Stand Strong for Who You Are, is a highly appropriate winner. This double portrait of the artist clasping hands with footballer Adam Goodes may be too loosely painted for those who insist on near-photographic precision, but it's a sincere and likeable image.

Stand Strong is not an angry picture but a call for everyone to feel proud and confident in their own skin. At a time when the world is becoming increasingly divided, Namatjira posts a simple, positive message about race and identity. If you're thinking this shouldn't be a consideration when it comes to picking the best painting, that would be an unrealistic expectation.

The majority of AGNSW Trustees are not art experts and are certainly not looking for the neatest, correctest portrait. With 1068 entries this year, the task of choosing a winner may have seemed daunting, but current events provide an unspoken set of guidelines.

Even before the finalists were chosen it was clear that it would take an exceptional painting to overturn the probability of an Indigenous winner.

That painting didn't turn up, although in another year, Wendy Sharpe might have ticked all the right boxes with her portrait of Magda Szubanski, which is bound to be a popular favourite, along with all those photorealist works, that hold an undying appeal for a general public still devoted to the spectacle of skill.

The fact that Tsering Hannaford's Self-portrait After 'Allegory of Painting' picked up a "highly commended" from the judges indicates some solidarity with popular taste, perhaps by way of compensation for the rough and ready nature of the winner. Based on a famous self-portrait by Artemisia Gentileschi, the iconic female artist of the Baroque period, it's a gentle nudge on behalf of women artists and dedicated realists – two groups marginalised by the modernist era.

As for the rest, it's a fairly even selection, with few real stinkers and no genuine stand-outs. The weirdest picture by far is Marc Etherington's bizarre portrait of art dealer Michael Reid, who looks like Nosferatu asleep in his coffin, surounded by tiny clones. It's a work that doesn't get any less strange (or any better) the longer one looks.

On the whole it's a pretty dull show, but I could say that about every Archibald! The enduring popularity of this phenomenon has nothing to do with quality – or indeed, with art – it's one of those comfortable local rituals that has embedded itself within our popular culture.

It remains to be seen if COVID-19 can put a dent in the exhibition's usual booming attendance figures. The need for social distancing means there will be timed ticketing and other measures which are distinct turn-offs for viewers. Until January 10, the AGNSW will be the site of a momentous struggle between the pandemic and that peculiar, annually-recurring virus known as Archibald Prize fever.

The Archibald, Wynne and Sulman Prizes is at the Art Gallery of NSW until January 10.

Archibald, Priz, This, why, years
Celebrities