The coronavirus pandemic has not killed city working, the head of the Productivity Commission has proclaimed while warning the “cleansing” effects of the recession have yet to fully work their way through the Australian economy.

Commission chief executive officer Michael Brennan, in a speech in Canberra, said the country could not simply try to rebuild the economy as it was in 2019, urging reforms in areas such as state planning regulations. 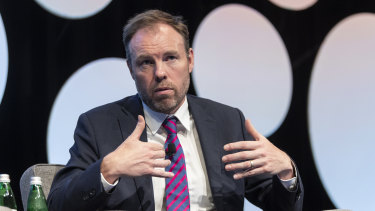 Productivity Commissioner Michael Brennan says the death of the CBD has been over-blown while warning more “cleansing” of the post-recession economy is likely.Credit:Louie Douvis

Despite the largest fall in economic activity since the 1930s, Australia has emerged from the coronavirus pandemic with unemployment at 5.5 per cent, house prices growing at their fastest rate in three decades while the number of firms forced into administration has fallen by almost a third.

Mr Brennan said the focus of government policy through the pandemic had been to “hold things together”, which had successfully kept a lid on unemployment while allowing businesses to remain operational.

He said in the wake of past downturns there had been a reallocation of workers and resources from failed businesses, which had led to an increase in productivity as occurred following the 1990-91 recession.

“It is possible we have not yet seen the full reallocative effect of this recession,” he warned.

Mr Brennan said there were signs of technological change out of the recession, including the lift in the number of people working from home.

While some business leaders have bemoaned this, particularly those reliant on commercial tariffs in central business districts, Mr Brennan said claims the nation’s inner cities would suffer permanent damage because of the pandemic seemed overblown.

“The true ongoing innovation may be less about where we work and more about how we work,” he said.

“It would be foolhardy to proclaim the death of the city. It is even possible that increased working from home could increase the concentration of office jobs in CBDs. 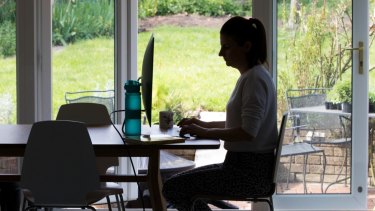 Working from home soared through the pandemic, prompting complaints from some business leaders, but the Productivity Commission says it may bring long-lasting benefits.Credit:Bloomberg

“It is futile to try and frustrate the trend towards some increase in remote working. It is a natural, technologically enabled innovation that can work to the mutual benefits of firms and workers if worked through cooperatively.”

Mr Brennan said while Australia had out-performed almost every rich nation in terms of productivity growth over the past 30 years, it had struggled over the past decade with income growth akin to “the 1970s”.

He said the rise of telehealth during the pandemic was an example of the productivity innovations that could flow out of the recession.

Online retailing coupled with working from home could also mean the planning regulations enforced by local councils and state governments needed to change to accommodate the pandemic’s fallout.

“The office will evolve, as will different forms of retail. The shift of industrial land from manufacturing to logistics will probably continue. Perhaps office and residential uses will blur to some extent,” he said.

“But in the face of all that potential change, we still have state planning systems that are highly prescriptive as to what different forms of economic activity can occur where.

“Some measured steps could make the system more market-driven and help boost the flexibility of our economy in adapting to change.”

The commission, which released its Shifting The Dial report into major productivity-enhancing proposals in 2017, is expected to start a fresh review of the economy in the coming months.

"Working, flexible, kill, the, Will
Celebrities