Home » Lifestyle » Woman, 56, with Bell's Palsy has her confidence restored with Botox

Woman, 56, with Bell's Palsy has her confidence restored with Botox

Grandmother, 56, whose face was ‘asymmetrical’ for 19 years due to Bell’s Palsy reveals incredible results after having Botox injected around her eyes, cheeks and mouth

A grandmother who has been living with a facial palsy that left her unable to speak properly for nearly two decades has her confidence restored using Botox.

Susan Baldock, from Wootton Bassett, Wiltshire, was diagnosed with Bell’s Palsy in 2010. Bell’s palsy is temporary weakness or lack of movement affecting one side of the face.

The condition left the now 56-year-old with facial paralysis, causing her eye, cheek and mouth to ‘drop’ significantly on one side.

Susan became increasingly self-conscious and found herself covering her mouth when she spoke and struggled to maintain eye contact.

But she has since had her confidence restored after having Botox injected around her cheeks, eyes and mouth. 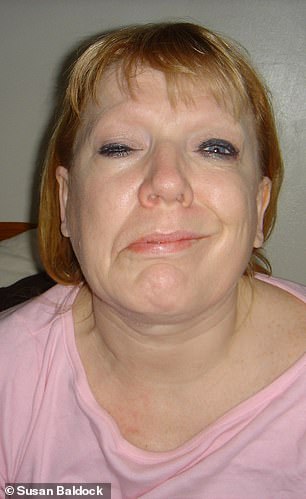 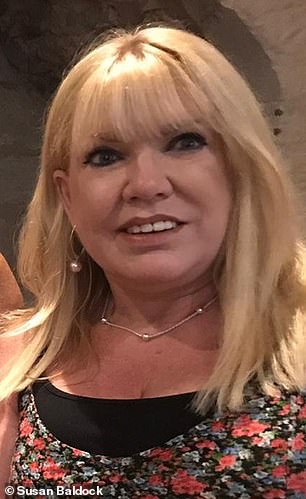 Susan Baldock, from Wootton Bassett, Wiltshire, who has been living with a facial palsy that left her unable to speak properly for nearly two decades has her confidence restored using Botox. Pictured: Before in 2010 (left) and after in 2019 (right)

Susan, who is now a grandmother, said: ‘I had been living with Bell’s Palsy for the past 19 years and it completely affected one side of my face, leaving me with severe asymmetry.

‘I had seven operations on my face to try and get some sort of movement back, but none of them worked. The NHS prescribed me with Botox injections every three months over a period of around 10 years, but each time I went, I saw someone different and the results were never consistent and generally a bit disappointing.’

‘After my illness, I took nine months off work as I needed to learn to talk again. Prior to my illness, I had been working for a tagging company – they fitted tags to prisoners who were released early from prison. Part of my job was to monitor them.

‘When I finally returned to my job, I was subjected to a lot of bullying in the workplace which made my life very challenging at the time. 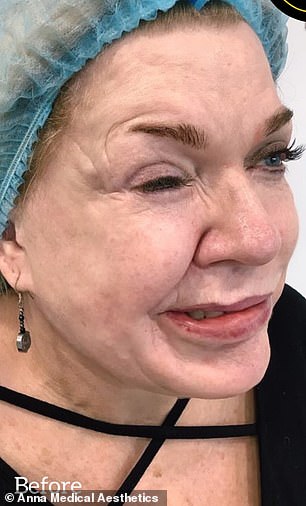 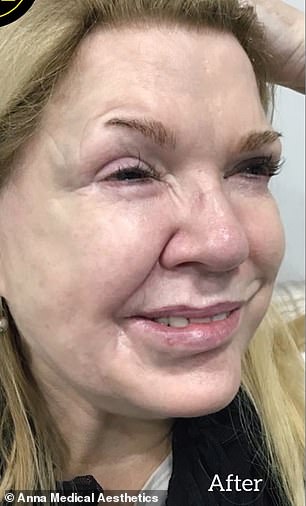 The condition left the now 56-year-old with facial paralysis, causing her eye, cheek and mouth to ‘drop’ significantly on one side. Pictured: Before (left) and after (right) 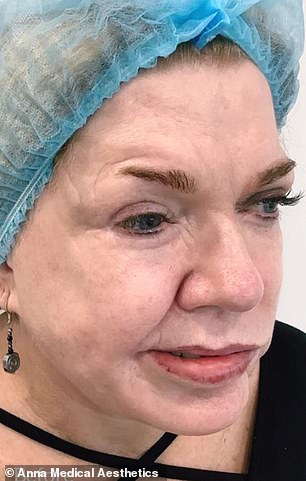 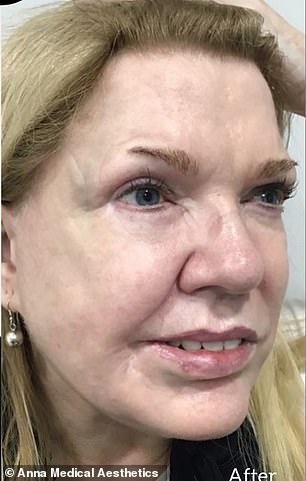 Skilled practitioner Anna treated Susan with a muscle relaxing treatment, Botulinum toxin, carefully positioned in the upper, mid and lower section of her face. Pictured: Before (left) and after (right)

‘I was already feeling incredibly self-conscious, particularly surrounding the appearance of my face, which was still severely drooping on one side and also my speech, which had also been affected by the illness.’

She added: ‘My colleagues were pretty ruthless and didn’t show much sympathy at all. The bullying started off as name calling and progressively got worse.

‘Eventually, I was physically attacked by one of my colleagues in a supermarket, which is when I decided to leave my job. It was an awful time for me.’

Then Susan heard about Anna Kremerov, from Anna Medical Aesthetics, Swindon, who was an experienced advanced nurse practitioner and skilled facial aesthetics expert.

Susan said: ‘I’ve seen countless people for treatment through-out the years, but Anna was the first person who I felt ever really listened to me.

‘No one had ever taken that much time to sit with me and listen to how the Palsy was affecting my life. She took so much time to understand my concerns, my needs – it was so refreshing.’ 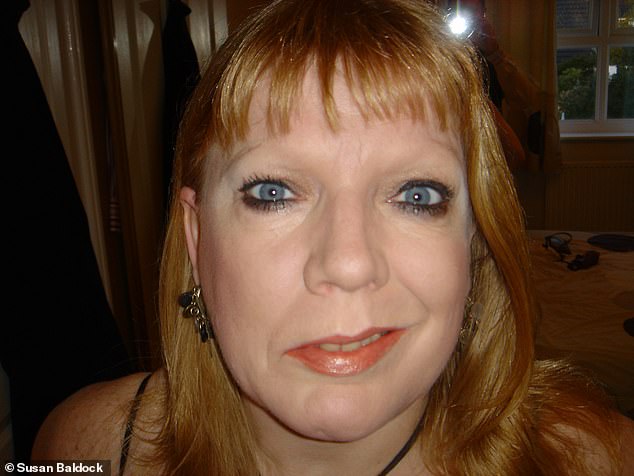 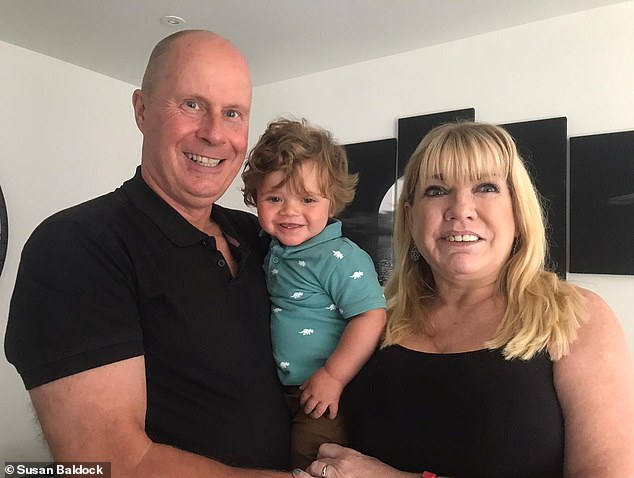 Susan (right after treatment), who is now a grandmother, said she had previously been bullied at work for her condition

She said: ‘When I met Susan, I immediately felt empathy for her as I could see how much the Palsy was affecting her emotionally, as well as physically. I spent a long timing learning about how the Palsy was affecting Susan’s day to day life and I learned that Susan’s main objective was to improve her life quality by decreasing the pain associated with muscle spasms and to improve her facial symmetry.

‘She felt that her condition altered her facial aesthetics, caused speech and chewing impairment, difficulty expressing emotions and most significantly affected her ability to express her emotions and smile.’

Anna continued: ‘I knew that Susan had been attending a Botox clinic regularly under the NHS but was unhappy with a lack of continuity of care and eventually stopped attending the clinic eight years ago.

‘During our consultation, I noted all previous facial reanimation procedures and carried out a careful physical examination of Susan’s face. This included detailed photo documentation and videography to analyse the face in rest and after a series of voluntary movements. 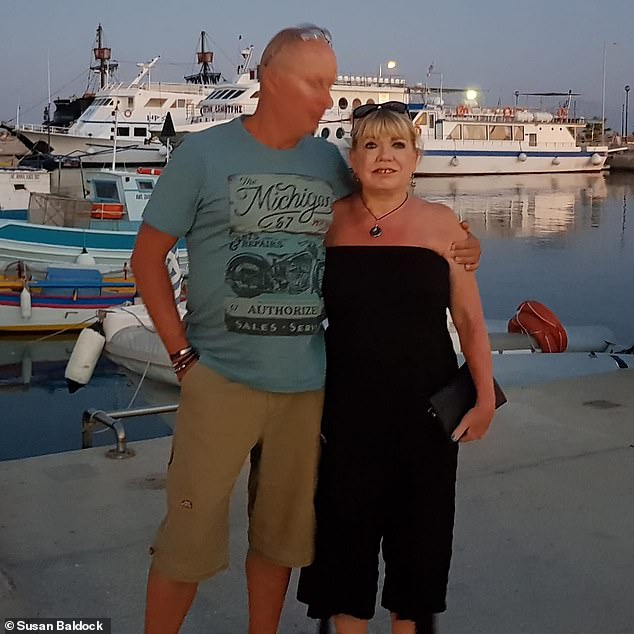 ‘The video of usual speech pattern was also recorded to help in evaluation and assessment of her synkinesis.’

Anna treated Susan with a muscle relaxing treatment, Botulinum toxin, carefully positioned in the upper, mid and lower section of her face.

It was concentrated on the eye, cheek and mouth area where the Palsy had impacted her face the most.

Susan was thrilled with the results which took affect around two weeks after treatment.

‘When I looked in the mirror for the first time, I cried with happiness. The results Anna managed to achieve were beyond what I could have imagined and I felt like my old self for the first time in years’, she said.

‘Anna honestly changed my life for the better. She is amazing and I wouldn’t go to anyone else. I have complete trust in her.’