Woman, 36, claims having BOTOX in her jaw every three months has helped cure crippling headaches that left her feeling life ‘wasn’t worth living’

A woman who was plagued by crippling headaches that were ‘ruining her life’ claims having Botox in her jaw every three months has left her ‘pain free’.

Keira Wallis, 36, from Guildford, told how she began suffering from terrible headaches three years ago, after a prolapsed disc in her back caused nerve impingement.

She was lucky if she went a day without one, and admitted they were so severe that she often felt unable to go to work or see her friends. 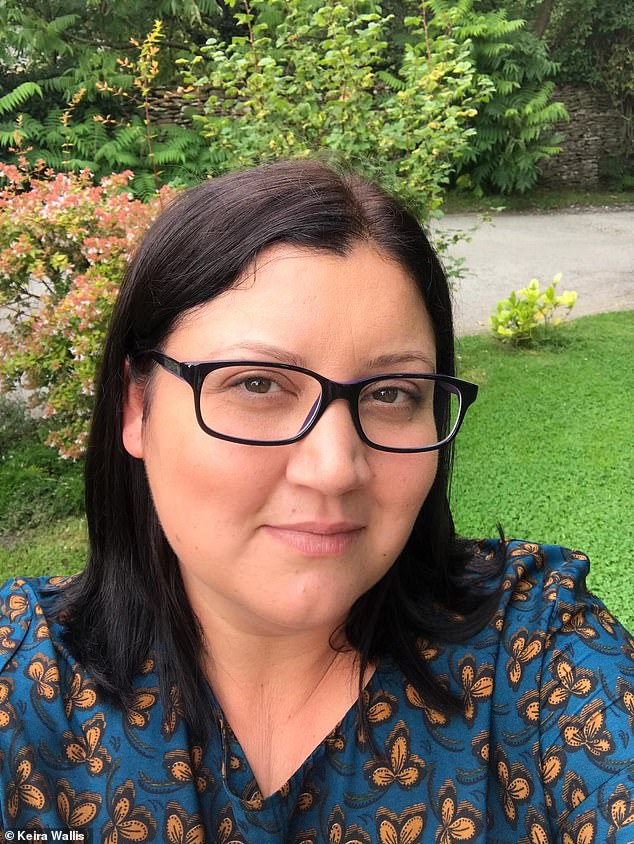 Keira Wallis, 36, from Guildford, was plagued by crippling headaches that were ‘ruining her life’

Keira said she was lucky if she went a day without a headache, and admitted they were so severe that she often felt unable to go to work or see her friends

Keira was eventually diagnosed with temporomandibular disorder, known as TMD, where the complex system of muscles, bones, and joints stop working in harmony resulting in chronic facial pain.

In December 2018 she visited Dr Rekha Tailor at Health & Aesthetics in Surrey, who suggested injecting Botox into her jaw muscles to ‘paralyse’ them and prevent them from clenching too much.

Following the five minute procedure, which cost around £300, Keira said she noticed a staggering difference in just a week.

‘For the first time in nearly three years I was headache free,’ she told FEMAIL. ‘I’ve never looked back! Thanks to Botox I’m pain-free and enjoying life again.’ 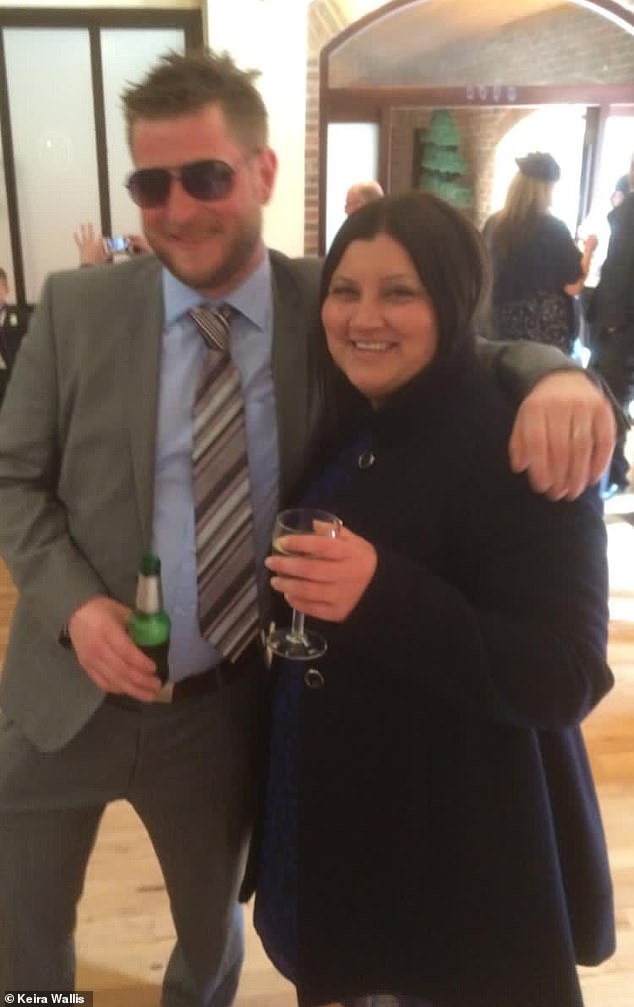 In December 2018 Keira visited Dr Rekha Tailor at Health & Aesthetics in Surrey, after her husband Jim told her she was grinding her teeth at night. Dr Rekha suggested injecting Botox into her jaw muscles to ‘paralyse’ them and prevent them from clenching too much

Keira told how her back injury coupled with studying for a post-graduate diploma in Cancer and Clinical Oncology, and a bereavement, left her ‘really stressed’.

Temporomandibular disorder (TMD) is a condition affecting the movement of the jaw.

Symptoms include pain around your jaw, ear and temple, clicking, popping or grinding noises when you move your jaw, a headache around your temples, difficulty opening your mouth fully and your jaw locking when you open your mouth.

The pain may be worse when chewing and when you feel stressed.

‘I started suffering from terrible headaches,’ she recalled.

‘They were so severe that I got them for five to six days at a time and for 24/7.

‘I was constantly in pain – it stopped me going to work some days and left my mood low and my social life in tatters.

‘On one particular day I had gone to London for a client meeting and the pain was so severe that I had to cancel at the last minute and get the train straight home, crippled in agony.’

Presuming she was suffering from stress-induced headaches, Keira said she visited her GP several times but was simply prescribed painkillers.

‘The pain was so intense and for such long periods of time that I began to think that if that was going to be my quality of life it wasn’t worth it,’ she admitted. ‘I felt like I couldn’t live like that any more.’

After a year of suffering, Keira went to see a neurologist at Mount Alvernia Hospital in Guildford.

He suggested her headaches were a result of ‘medication overuse’ and advised her to stop taking her prescribed drugs and visit an acupuncturist.

Keira admitted the alternative therapy ‘helped a bit’ but the pain remained constant, day in, day out.

It when then that her husband Jim remarked on how much she was grinding her teeth in the night, complaining it was keeping him awake. 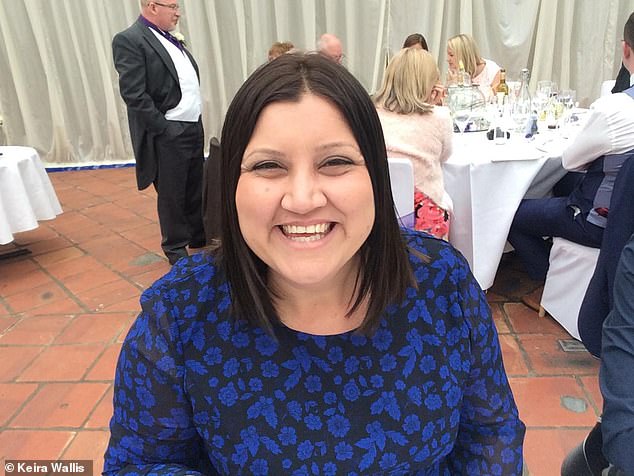 Keira said: ‘After years of headaches that were so painful they were ruining my life, not to mention the time and money spent on acupuncture, physio, osteopathy, neurologist visits, maxillofacial appointments, MRI scans and medication, finally I was pain free and able to enjoy life’

Keira made an appointment with her dentist and was told she had a lot of wear on my teeth from the grinding.

She was diagnosed with bruxism – a a sleep-related movement disorder in which you grind, gnash or clench your teeth.

What exactly is Botox?

‘The technical term for anti-wrinkle injections is actually botulinum toxin, so while a clinic may be advertising a Botox procedure, it might not be the actual product that’s used in your treatment—hence why it’s important to do your research before you book in.

‘Botox is a drug made from a toxin produced by the bacterium Clostridium botulinum. It’s the same toxin that causes a life-threatening type of food poisoning called botulism. However, as a cosmetic doctor I can use it in small doses to temporarily smooth facial wrinkles among other things.

‘The toxin has been used commercially for medical and cosmetic purposes since 1987 when Vancouver doctors Jean and Alistair Carruthers accidentally discovered cosmetic properties in a toxin normally used by ophthalmologists.

‘Nowadays Botox injections are used in cosmetics primarily for their ability to reduce the appearance of facial wrinkles.

‘However, more than half of its revenue comes from its therapeutic use for a range of medical conditions including neck spasms (cervical dystonia), excessive sweating (hyperhidrosis), an overactive bladder, lazy eye, chronic migraines, crossed eyes, twitching eyelids, back pain, depression, Bruxism (excessive teeth grinding), and premature ejaculation.

‘In causes such as excessive sweating, Botox injections use the botulinum toxin to block the nerve signals responsible for sweating, stopping the sweat glands from producing too much sweat.

‘Studies have also shown that Botox injections may significantly reduce chronic neck pain when used in combination with physio. It does this by helping to relax muscles and treat uncontrolled muscle contractions.

‘I did some research on this and came across a condition called Temporomandibular disorder,’ Keira explained.

‘Any problem that prevents the complex system of muscles, bones, and joints from working together in harmony may result in temporomandibular disorder.

‘As I looked at the symptoms they matched mine completely – especially the crippling headaches.

‘So I visited a Maxillofacial consultant who diagnosed me with TMD.

‘They explained that my chewing muscles were extremely overdeveloped as a result of the bruxism, and recommended Botox.’

During her session with Dr Rekha, she told ow the Botox would effectively paralyse the muscles in her jaw and allow them to relax, thus reducing the pain.

Keira added: ‘After years of headaches that were so painful they were ruining my life, not to mention the time and money spent on acupuncture, physio, osteopathy, neurologist visits, maxillofacial appointments, MRI scans and medication, finally I was pain free and able to enjoy life.

‘Dr Rekha Tailor explained that the procedure usually lasts three to six months, so approximately three months later I had Botox injected into my jaw again, as well as into my forehead this time to further prevent the headaches.

‘An unexpected side-effect is that my face has slimmed down a lot too, because the overdeveloped jaw muscles have reduced and my skin looks wrinkle-free!

‘Although aesthetics is the reason most people get Botox nowadays, for me it was just a welcome side-effect of the treatment that’s given me my health and my life back.’

NICE suggests the treatment be considered as an option for the prevention of headaches for people who have chronic migraines that have not responded to at least three prior preventative drug treatments.

Dr Rekha said she has seen a rise in patients using Botox for crippling headaches.

‘Botox has become synonymous with “tweakments”, however Botox injections have been used to treat headaches and chronic migraines for years now,’ she explained.

‘Due to its nerve-blocking effects it plays a big role in treating a variety of medical conditions and more and more patients are realising the benefits of using Botox to treat persistent headaches.’