‘People like you bring house prices down’: Woman who left her wheelie bin on the street reveals nasty note from NHS worker neighbour – who claims she’s also reported her to the police for ‘breaking lockdown rules’

A woman who received a threatening note accusing her of breaking Covid-19 rules and bringing down local house prices has told how the accusations are ‘no more than bullying.’

The anonymous woman, who had been living on the estate in Burton for just two months when she received the ‘harassing’ note, revealed that she has since been having ‘anxiety attacks’ after being made to feel like she has an ‘enemy on the street,’ Staffordshire Live reported.

The letter, which was sent shortly before the third lockdown, when the area was placed in Tier 4, begins: ‘We would all appreciate if you would remove your wheelie bin on the day it’s been emptied and not leave it out for days.’

It then proceeds to accuse the new resident of being ‘selfish’ for not adhering to Covid-19 guidelines, before stating the police and landlord had been notified of her actions.

The upset resident denied breaking any rules and said the accusations were ‘no more than bullying,’ but she did admit to forgetting to bring the wheelie bin back in after it had been emptied. 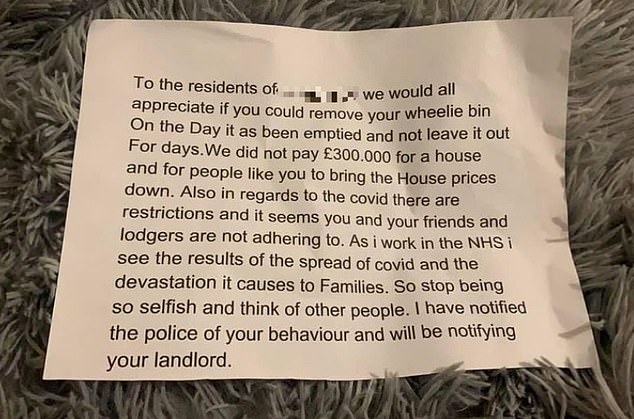 An anonymous woman, from Burton, has revealed the threatening note (pictured) she received from an ‘NHS worker’ accusing her of bringing down local house prices by leaving her wheeling bin out the front

The note reads: ‘To the residents of number ** we would all appreciate if you could remove your wheelie bin on the day it as been emptied and not leave it out for days.

‘Also in regards to the covid there are restrictions and it seems you and your friends and lodgers are not adhering to.’

‘As I work in the NHS I see the results of the spread of covid and the devastation it causes to families. So stop being so selfish and think of other people. I have notified the police of your behaviour and will be notifying your landlord.’ 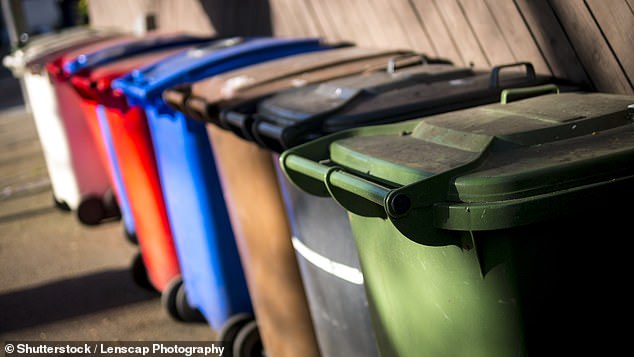 The woman had been living on the estate in Burton for just two months when she received the angry note. Pictured, stock image

The upset new resident explained that she has been struggling with depression and anxiety over the past few months and has found it hard to leave her house.

‘To have this posted through the door really isn’t nice, I have been having anxiety attacks ever since I received this,’ she explained.

‘This is no more than bullying, as I live in a Trent and Dove property. I have been made to feel like I am too underprivileged to be on this street, which isn’t a nice feeling at all.’

She went on to clarify that in reference to the comment about having people around, it was her family who are in her support bubble.

The new resident added that if the note was from an NHS worker they should be ‘disgusted with their behaviour.’

‘Saying I’m bringing the house prices down makes me feel like a tramp,’ she said. ‘You don’t know what people are going through, you can’t go sending letters like that. It feels like I’ve got an enemy on the street.’