Woman sparks debate about leaving the toilet seat up

A new mother who claims she keeps ‘falling in the toilet’ because her husband is leaving the seat up has sparked a debate over bathroom etiquette.

The British woman took to Mumsnet to explain that her husband is off work sick and is ‘getting under her feet at home’ with habits she hasn’t previously noticed.

Chief among them is his habit of lifting the toilet seat when he urinates, then failing to close it once he has finished.

Other Mumsnet users were divided over whether the woman was right to be annoyed at her husband, with some saying she should simply look before she uses the toilet. Some even said she should lift it for him if it bothered her so much. 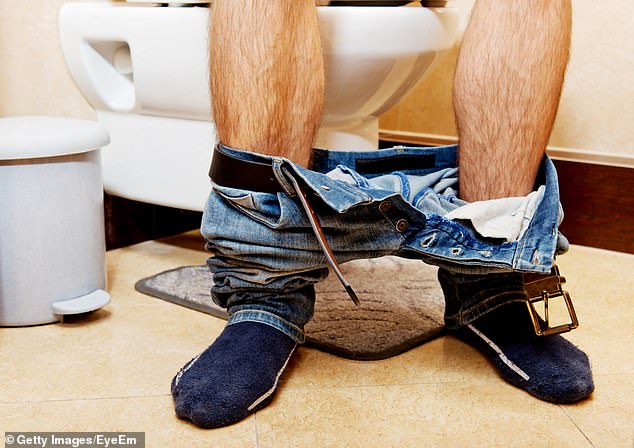 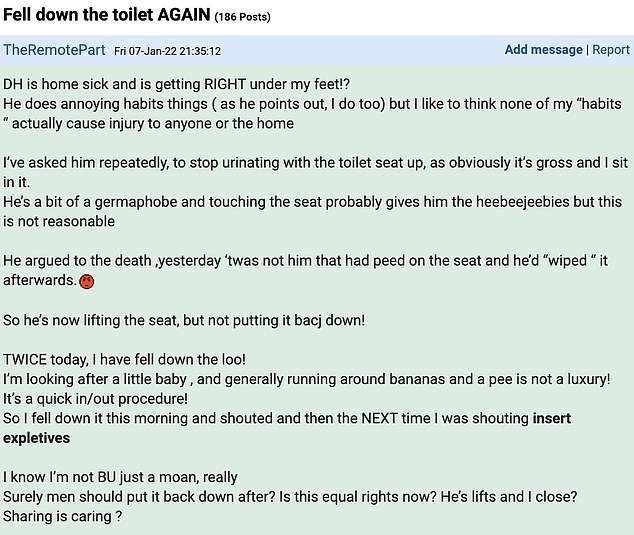 In her post she revealed that pee on the seat had prompted her to ask him to lift it, but leaving it up was causing her to fall in

The woman wrote: ‘I’ve asked him repeatedly, to stop urinating with the toilet seat up, as obviously it’s gross and I sit in it.

‘He’s a bit of a germaphobe and touching the seat probably gives him the heebeejeebies but this is not reasonable.

‘He argued to the death yesterday ‘twas not him that had peed on the seat and he’d “wiped “ it afterwards. So he’s now lifting the seat, but not putting it back down!’

She added: ‘TWICE today, I have fallen down the loo!’ I’m looking after a little baby , and generally running around bananas and a pee is not a luxury! It’s a quick in/out procedure!’

‘So I fell down it this morning and shouted and then the NEXT time I was shouting. Surely men should put it back down after? Is this equal rights now? He’s lifts and I close? Sharing is caring?’

Some commenters agreed the woman wasn’t unreasonable to ask for the seat and lid to be put back down after her husband used the toilet, pointing out it is more hygienic

Some commenters strongly felt that getting a wet bottom was entirely the fault of the woman for not checking whether the seat was down before her own use.

One person wrote: ‘It’s pretty obvious when it’s up… The two minutes that it takes to go into the toilet and do a pee surely doesn’t need too be a rush job even with a baby, it’s minutes they will be fine.’

Another commenter agreed saying: ‘If he’s putting it down for you, are you lifting it up for him? Same difference if you ask me.’

A third person simply said, ‘Look when you’re sitting then.’

Others, however felt that leaving the seat up was not only unreasonable but would spread germs around the bathroom too.

One person wrote: ‘The rule in our house is lid closed when you’re done, so this wouldn’t be a problem. More hygienic for flushing too.’

Another thought her husband should have learnt bathroom manners, saying: ‘Would be mortified at a grown man living in my house that couldn’t pee without p*****g on the seat or at least cleaning it up.’

Another person was repulsed by the germs, saying: ‘Surely everyone puts the toilet lid down to flush to stop all the urine and fecal matter spraying all over your bathroom?’