A woman, who went to the gym in a cropped T-shirt and leggings, reveals how staff told her to ‘cover up’ or leave.

Taking to TikTok, the woman, named Alana, said she was told her top was ‘too short’ by staff at the gym chain Planet Fitness in Fairfield, New Jersey.

The student, who was wearing a red top from Rutgers University, New Jersey, was informed she’d breached the dress code, and told her to cover up or leave.

Captioning the clip outlining the situation, which has been viewed over 150,000 times, she wrote: ‘Time to find a new gym.’ 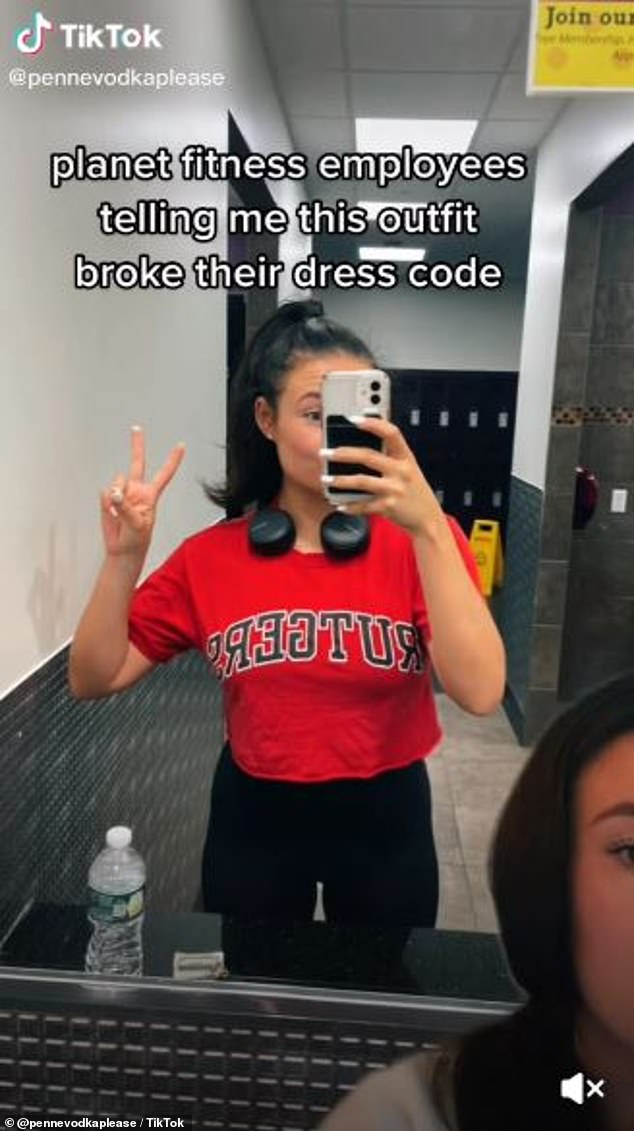 A woman, who went to the gym in a cropped T-shirt and leggings, was told to cover up by staff and took to TikTok to share a snap of her outfit

In the clip, Alana shared a snap of her outfit as she posed in the locker rooms of the gym to take a mirror selfie.

Using the snap to show she wasn’t revealing any skin, she then added a video of herself over the picture, and mimed: ‘If you don’t like me that’s fine, but watch your mouth.’

People were quick to comment on the gym’s decision, with many wondering how the ensemble broke any codes.

One person asked: ‘What’s their explanation? I see nothing remotely wrong.’

‘That’s ridiculous’, another said, ‘I wear a sports bra and short to the gym – you’re literally just trying to work out, what you wear shouldn’t matter.’

A third, who was baffled by the decision, said: ‘Yeah, right there on the spot I’d tell them to cancel my membership.’ 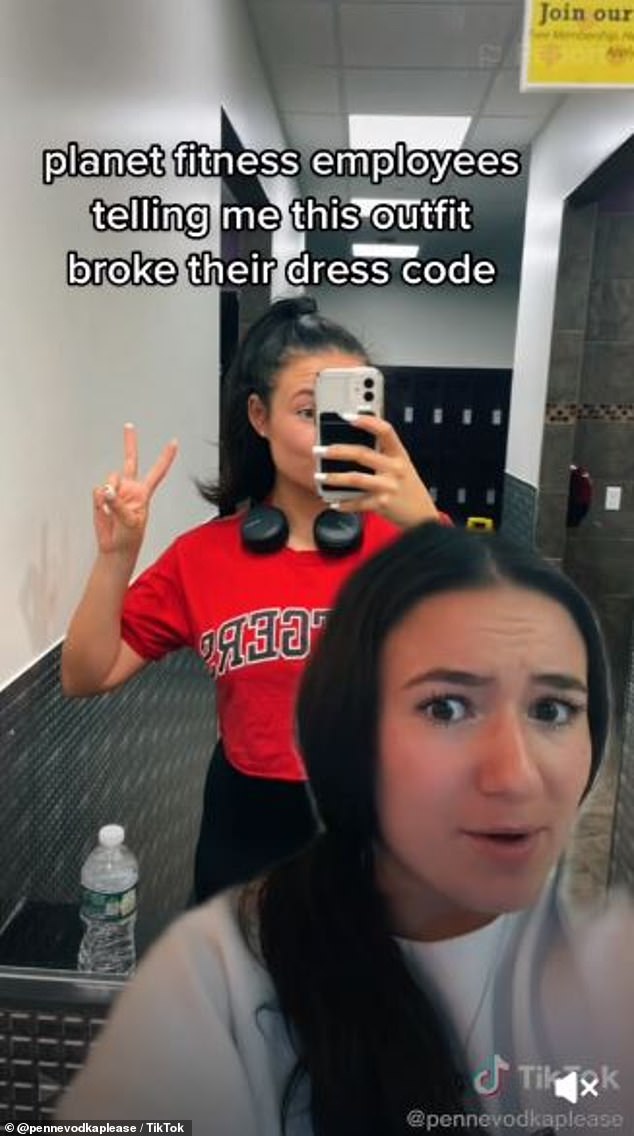 Taking to TikTok, the woman named Alana said she was told her top was ‘too short’ by staff at the gym chain Planet Fitness in Fairfield, New Jersey

Alana responded: ‘They said my shirt was too short so I should pull my shirt down more and my leggings up more.’

According to Planet Fitness’ website, there is no specific ban on crop tops, but it says that it will ban outfits that could be perceived as ‘intimidating’.

It says: ‘We’re all for people expressing themselves, but do ask that clothing that may be perceived as intimidating, revealing, or offensive not be worn in the club.

‘We also do not allow clothing that may present safety hazards or damage equipment.

People were quick to comment on the gym’s decision, with many wondering how the ensemble broke any codes, as Alana explained they said the shirt was ‘too short’

‘Examples of clothing that is not allowed include: open-toed shoes or sandals; mud-caked, greasy, or soiled shoes or clothing; jeans or pants with prominent grommets and clothing with messaging that a reasonable person may find offensive or otherwise inappropriate.’

A spokesperson from Planet Fitness said: ‘We sincerely apologize for the unfortunate incident that took place at our Fairfield, NJ location.

‘In this instance a staff member enforced a company dress code policy in error. We are working closely with the local franchise owner to reeducate our staff on current policies.

‘We have also contacted this member directly to personally apologize and look forward to welcoming her back into our clubs.’