China will extend its military drills around Taiwan by sending fighter aircraft to simulate air-to-ship strikes after it denounced the “finger-pointing” from regional democracies urging it to halt the exercises to prevent the danger of a miscalculation.

The Chinese military command said the operations would focus on “anti-submarine and air-to-ship strikes” after the scheduled end to its live-fire exercises, stepping up its show of force in the worst crisis in the Taiwan Strait in decades. 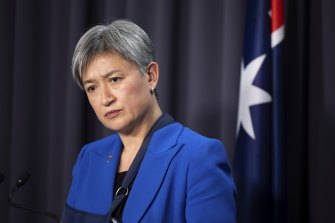 Foreign Minister Penny Wong called again on Monday for “restraint and de-escalation” from China after four days of sea and air operations around Taiwan, as she held talks in Canberra with visiting United States deputy secretary of state Wendy Sherman.

Addressing Sherman in a meeting in Parliament House, the foreign minister said Australia viewed the US as “indispensable” to ensuring stability in the region.

Sherman signalled on Sunday the US expected China to extend the military operations but said it would make no change to the status quo in the Taiwan Strait.

“We anticipated China might take steps like this. We expect they will continue to react both in the coming days and over a longer time horizon,” she said, speaking to journalists in Solomon Islands on Sunday before she flew to Australia. 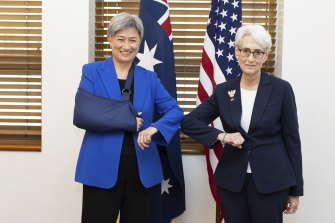 Penny Wong told US deputy secretary of state Wendy Sherman that Australia viewed the US as “indispensable” to ensuring stability in the region.Credit:Alex Ellinghausen

China has sent warships, fighter jets and drones into six areas around Taiwan and fired 11 ballistic missiles across the area, with some landing in waters in Japan’s exclusive economic zone.

While China claimed its Nanjing destroyer had sailed into Taiwanese territorial waters, the Taiwan Ministry of National Defence rejected that claim as an example of “misinformation” from the Peoples’ Liberation Army.

“No [PLA] vessel has entered our territorial waters since August 4 when the PLA drill started,” the ministry said. It said it had detected 14 PLA vessels and 66 PLA aircraft in the region around Taiwan on Sunday alone.

The latest move heightens concerns about an accident that triggers a military clash as Su Tseng-chang, Taiwan’s premier, said China was “barbarously using military action” to disturb peace in the Taiwan Strait.

“We call on the Chinese government not to go around wielding its military power, showing its muscles everywhere and jeopardising the peace of the region,” he told reporters on Sunday.

Labor and the Coalition have voiced bipartisan support for the One China policy in recent days, reflecting an Australian stance that dates back decades, but a policy gulf emerged on Monday when Opposition Leader Peter Dutton backed the Taiwan visit by US House Speaker Nancy Pelosi, the event that triggered China’s military response.

Prime Minister Anthony Albanese and Deputy Prime Minister Richard Marles have avoided any comment to support or criticise the Pelosi visit, in line with statements from Wong.

“Yes, she should have,” Dutton said when asked if Pelosi should have gone to Taipei.

“I’m pleased that she did because the reaction from China is completely over the top and it’s disproportionate to the visit by a Speaker of the House of Representatives in the world’s biggest democracy to visit an independent country.”

That remark breaks with longstanding policy because Australia does not recognise Taiwan, known as the Republic of China, as an independent country.

“The Australian government does not recognise the ROC as a sovereign state and does not regard the authorities in Taiwan as having the status of a national government,” the Department of Foreign Affairs and Trade says.

Dutton added, however, that he was not arguing for a change to the circumstances in regard to Taiwan.

“Nobody’s arguing for there to be a breaking of the current arrangements, I should be very clear. But at the same time, the Chinese government’s reaction under President Xi [Jinping] has been wildly disproportionate,” he said.

“China is amassing nuclear weapons. When we say that we’re in a period similar to the 1930s, that is not made up, it’s not exaggerated.”

Asked if he would visit Taiwan, he said: “It’s not something that I would contemplate. I don’t think that helps the situation.”

Sherman labelled the Chinese drills an “over-reaction” to the visit to Taiwan by Pelosi last Wednesday and emphasised the importance of climate change as an issue where US President Joe Biden was taking the lead on a priority for countries in the Pacific.

Speaking in her meeting with Wong on Monday, Sherman noted the passage of Biden’s climate change bill through the US Senate and said this showed Pacific Island leaders the US and Australia were aligned on a key issue for the region.