Zachary Levi has opened up in depth about his mental health, revealing that just five years ago he checked himself into a psych ward after experiencing suicidal thoughts.

In an upcoming appearance on Elizabeth Vargas’ Heart of the Matter podcast, the 41-year-old “Shazam!” star shared he’s “struggled” with mental health issues “most of my life” — but “didn’t realize” it fully “until I was 37, about five years ago and I had a complete mental breakdown,” per The Hollywood Reporter.

He told Vargas his issues began in his youth, where he grew up with a mother who had borderline personality. He later began to turn to “sex or drugs or booze or things to distract me from, to numb me from myself from the pain that I was running away from most of my life.” That only made matters worse, Levi explained, because after that “temporary relief” comes anxiety that’s been amplified “tenfold.” He added, “So, then you’re running back to get more and it just becomes this vicious cycle.” 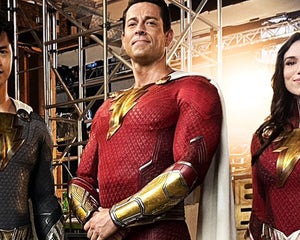 As he started to find success as an actor, Levi explained that he still felt “like I’m a bit on the outside looking in” — something with which he still struggles to this day.

“I’ve never really felt like I am a part of whatever the cool kid group is,” he said, something that stuck with him from his days as a “nerdy” kid. “I think that that carried with me into my career in Hollywood, and it gets reaffirmed to you in the lies that you tell yourself when you are not getting certain jobs, you’re not being hired to go do that movie or that show with this level of director or producer or actor or whatever it is.”

After moving to Austin with the hope to start a movie studio, he had a debilitating panic attack that eventually led to his decision to check into a psych ward.

“I drove around probably for 10 minutes not knowing which place to eat because I didn’t know which place was the right place to eat as opposed to just saying, ‘Zach, just go eat some food. It doesn’t matter. It doesn’t matter if you go to that pizza joint or that Chinese place or whatever. Just go get some food. If you’re hungry, go get some food,'” he recalled. “I’m sitting in my truck, and vividly, I remember I was holding onto the wheel and I was just shaking back and forth, that like almost trying to shake myself out of what it was going on, and I’m just weeping. I’m just crying. I’m like, ‘God, help me.'”

He later checked into an ER after “having very active thoughts of ending my life,” sharing that “it wasn’t the first time I had had them.” While he had a support system in the past, it was different after he moved to Austin — where that “support structure” simply didn’t exist yet.

“The lies are whispering into my ear and the failure that I felt that I was enough to be like, ‘Zach, it doesn’t feel like you’re going to make it out of this,'” he recalled, saying that he then sought additional treatment at a psych ward for three weeks of “intensive life-changing, life-saving therapy.”

He now manages his issues with prayer, meditation and a healthy lifestyle. The full podcast launches June 28.

If you or someone you know is struggling with depression or has had thoughts of harming themselves or taking their own life, get help. The National Suicide Prevention Lifeline (1-800-273-8255) provides 24/7, free, confidential support for people in distress.