PARIS — On her first four trips to the French Open, Johanna Konta could seemingly do nothing right. This time, she can do no wrong.

The 26th-seeded Konta reached the semifinals with a 6-1, 6-4 demolition of the seventh-seeded Sloane Stephens on Tuesday afternoon, taking firm control of the match early in the first set and never relinquishing it.

Konta, who reached the semifinals of the Australian Open in 2016 and Wimbledon in 2017, had never won a main-draw match at Roland Garros before this year, falling in the first round four times. With five wins thus far through the quarterfinals, she suddenly has a winning record at the tournament that had been the least successful of her career.

Konta, 28, of Britain, will have a chance for a sixth straight win, and a spot in her first Grand Slam final, when she faces the winner of Tuesday’s other quarterfinal between the unseeded Marketa Vondrousova and 31st-seeded Petra Martic.

After a competitive first three games, Konta broke for a 3-1 lead in the first set and did not look back. With Stephens down by 1-4, Konta ripped two consecutive return winners to give herself three break points.

Stephens, often languid between points, seemed to slow even further, trudging to her service position as if resigned to her fate. She fended off the first two break points, but Konta converted on her third with a forehand cross-court winner.

When Stephens held for 1-2 in the second set to end a skid of seven consecutive games, she screamed with catharsis. Konta, who already had beaten Stephens twice this year, was undaunted. She won her first four service games of the second set to love, and her first 18 points on serve overall before double faulting on the 19th. 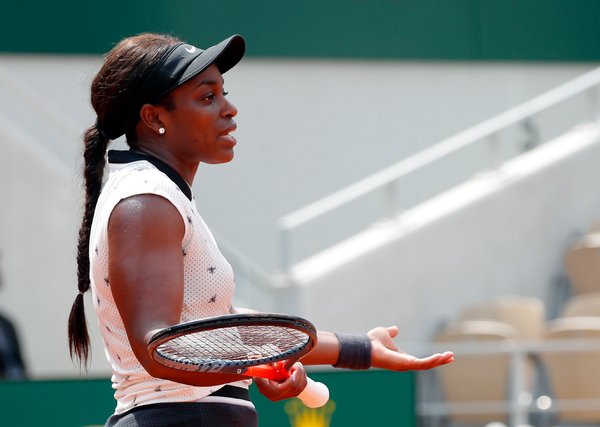 It proved only a blip. Konta won the next two points to close out the match in 1 hour 10 minutes, ending on a forehand error by Stephens that Konta confidently circled for an inspection and overrule by the chair umpire Louise Engzell.

That sort of confidence, which Konta had shown in becoming a top-five player years ago, had been missing in recent years. Dimitri Zavialoff, who has previously coached Stan Wawrinka and the two-time French Open semifinalist Timea Bacsinszky, has restored Konta’s foundering confidence this year by empowering her to make her own choices.

After falling to 50th during the past season, Konta is poised to re-enter the -op 20. With a title on Saturday, Konta would rejoin the Top 10.

“I have my own idea of what confidence is,” Zavialoff told reporters this week. “I think when a decision comes from a player, it is more valuable to the player than if it’s reproducing something that somebody is telling them.”

Under Zavialoff, Konta is having the most successful clay-court campaign of her career, reaching finals in Rabat and Rome before her run in Paris.

Showing her comfort level on the surface that requires the most versatility, Konta was able to dominate not just with her offense, but with counterpunching. After one particularly deep and well hit Stephens forehand in the first game of the second set, Konta hit a looping, high bouncing forehand that kicked off the far baseline and high over Stephens’s head. Stephens leapt for a high backhand stab but she could barely get her racket on the ball.

On break point, Konta rushed Stephens by coming to the net, forcing Stephens to hit a forehand passing shot wide.

“More than anything, I accepted playing the game and really enjoying that,” Konta said.

Stephens, the 2017 United States Open champion and the runner-up in Paris last year, had been considered the favorite in the bottom half of the draw, where she was the highest remaining seed.

Her exit leaves two Americans — Madison Keys and Amanda Anisimova — in contention for the women’s French Open title. In Wednesday’s quarterfinals, Keys, the No. 14 seed, will take on eighth-seeded Ashleigh Barty, while 17-year-old Amanda Anisimova will try to upset the defending champion Simona Halep.