Home » Sport » 2021 Australian Open: What to Watch on Tuesday Night

2021 Australian Open: What to Watch on Tuesday Night

Serena Williams thoroughly dominated in her first-round match. Williams won more than twice as many points as her opponent in the 56 minutes that it took to rout Laura Siegemund, a German doubles specialist. Against the unseeded Nina Stojanovic in Tuesday’s match, Williams will look to have a similar outing, keeping her match short and remaining fresh for the later rounds.

Williams isn’t the only one trying to build on early success, as Novak Djokovic and Iga Swiatek also look to build off dominant first-round performances.

Here are some matches to keep an eye on.

Because of the number of matches cycling through courts, the times for individual matchups are best estimates and are certain to fluctuate based on when earlier play is completed. All times are Eastern.

Venus Williams played her first Australian Open in 1998, reaching the quarterfinals. Even though she won her last WTA title almost five years ago, at the Taiwan Open in 2016, Williams has maintained a top-100 ranking. In her first-round match against Kirsten Flipkens, she committed just 13 unforced errors to Flipkens’s 30, a testament to her consistency.

Sara Errani was a French Open finalist in 2012 with a No. 5 peak ranking, but tested positive for the prohibited substance letrozole in 2017. She returned to a major in 2020 and, with a ranking outside the top 100, needed to go through the qualifying rounds to appear in the main draw at the French Open. As a clay-court specialist, she will need to try to flatten her shots more than usual to have a chance to upset Williams.

Novak Djokovic, the 2019 and 2020 men’s singles champion, eased through his first-round match against Jérémy Chardy, dropping only six games. Djokovic has had more success at the Australian Open than at any other major tournament, winning eight of his 17 Grand Slam singles titles there. After a pair of disappointing losses in the ATP Finals in November, Djokovic hopes to win his 18th Slam title on his quasi-home court. 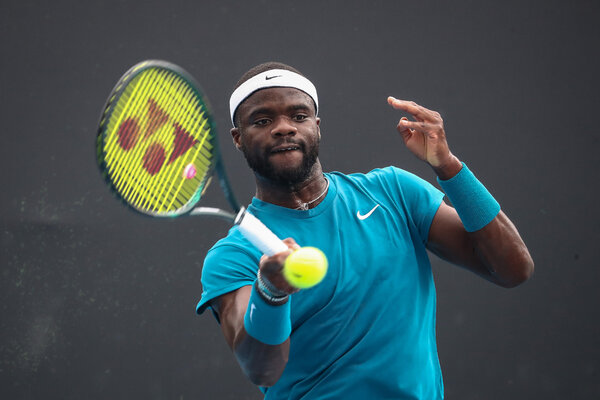 Frances Tiafoe, a 23 year-old American, had a breakthrough tournament at the Australian Open in 2019, reaching the quarterfinals before losing to Rafael Nadal. But he did not build from that result, losing in the first round in four of the next six Grand Slam events. Tiafoe has a powerful forehand, but his looping backswing can allow opponents to disrupt his balance. Against Djokovic, small inaccuracies in his form can turn into major weaknesses, and Tiafoe will need to play almost perfectly if he hopes to stage an upset.

Iga Swiatek, 19, became the latest first-time major champion in October at the French Open, beating Sofia Kenin, who had become a first-time Grand Slam winner at the 2020 Australian Open. Swiatek’s shotmaking ability is laudable, but she has made more headlines for her mental strength. She travels with a sports psychologist, Daria Abramowicz, who plays a central role in her success. Swiatek is no longer an underdog, and her first-round trouncing of Arantxa Rus looked strikingly familiar.

Camila Giorgi of Italy, ranked No. 79 on the tour, is a particularly aggressive player. Her rash play can lead to an abundance of unforced errors, especially against players who move well and push Giorgi to make the extra shot. Swiatek will certainly provide that challenge for Giorgi, but the faster hardcourt surface could play as an advantage for Giorgi.

When Andy Roddick, the last American man to win a Grand Slam singles title, won the United States Open in 2003, Reilly Opelka and Taylor Fritz were both about 6 years old. Now, those two Americans fill the same mold, as players with a propensity for overwhelming their opponents with big serves.

That’s not to say there aren’t differences. At 6-foot-11, Opelka has height as a natural advantage in his serving motion, but struggles with more subtle shots, while the 6-foot-4 Fritz is more mobile, using his lanky frame to create better shot angles around the court.

Both players showed promise on the junior circuit; Opelka won the 2015 Junior Wimbledon Championship while Fritz was the 2015 Junior U.S. Open champion. Neither has made it past the third round in the main draw of a Grand Slam event, and it won’t be long before the arrival of the next group of promising youngsters. They will both need to find their footing soon if they hope to make a bigger impression.

Here are a few more matches to keep an eye on: