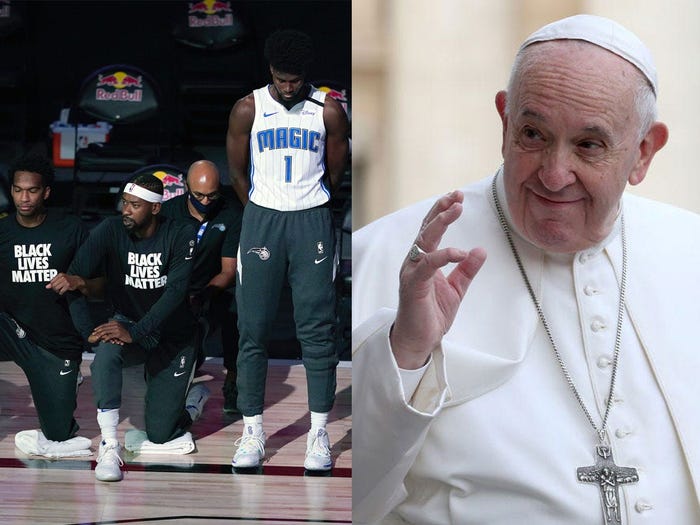 But now, their calls for justice have officially reached one of the most powerful men on the globe.

Pope Francis met with five NBA players and a handful of league representatives in Vatican City early Monday morning to discuss the players' work to raise awareness of social justice issues and economic inequality, according to ESPN's Zach Lowe. The leader of the Catholic Church initiated the meeting by organizing for his representatives to reach out to the NBA players' union last week, and the two parties quickly scheduled a meeting from there.

The meeting lasted approximately 30 minutes, and players took turns addressing Pope Francis, according to The New York Times. Milwaukee Bucks star Kyle Korver, one of the players who attended the unprecedented meeting at the papal library of the Apostolic Palace Monday, told The Times that the supreme pontiff recognized the power of sports as a means to model behavior and the he "really encouraged us to just humbly walk into that."

"He said sport is such an opportunity to unify, and he compared it to a team, where you have a common goal, and you're working together, but you all use your own personalities," Korver added.

After the restart of the latest NBA season, players shined a light on different forms of injustice in America by wearing various phrases — "Black Lives Matter," "Say Their Names," "Equality," and more — on the back of their jerseys. They also urged the league to print "Black Lives Matter" on the court. And before games, the vast majority of players and coaches knelt during the playing of the national anthem in protest of police brutality.

Korver and Brown were two of the Bucks players central to the team's decision to boycott a playoff game against the Magic on August 26 following the shooting of Jacob Blake. The move sparked a shutdown of professional sports across the United States and reinvigorated a national reckoning on race relations and police brutality in America.

Well before police officers in Kenosha, Wisconsin, shot Blake — a Black man — seven times in the back this summer, Brown had his own personal brush with police violence in The Badger State. In a story for The Players' Tribune published in July, the 25-year-old wrote that Milwaukee "cops kneeled on my neck, stood on my ankle, and tased me in a parking lot" during an incident in 2018.

During a late-night visit to Walgreens, Brown had illegally parked his car across multiple handicapped spots. The infraction prompted an officer to come to investigate, and once the situation escalated, six more squad cars came as backup. Brown alleges one official pulled a gun on him and that the city of Milwaukee subsequently offered him a $400,000 settlement to refrain from recounting the story publicly.

Meanwhile, Isaac garnered attention for refusing to kneel alongside his Orlando teammates — and the vast majority of his NBA colleagues — during the national anthem. An ordained minister, Isaac cited his religion as his impetus for continuing to stand.

"That would help bring us closer together and get past anything that's on the surface and doesn't really deal with the hearts of men and women," he added.

Despite the heavy nature of the meeting's stated subject matter, the group found time to exchange a joke or two. According to Tolliver, the pope was "super chill."

"He was actually way more relaxed than I'd ever imagine a pope being," Tolliver told The Times.

"And you know, when the pope makes a halfway joke, it's the funniest thing ever, right?" he added. "So when I say making jokes, anything that was supposed to be remotely funny, we made sure we gave him a good laugh."

Details of any future collaborations between the NBA and the Catholic Church have yet to be released. Still, Pope Francis' conference with and encouragement of the players undoubtedly lends a new level of international credence to their social justice efforts.