A decade after Nick Adenhart, death of Angels’ Tyler Skaggs a tragic reminder of grief’s permanence

At some point, the Los Angeles Angels will try to beat back the heartbreak and play baseball again.

The big leagues are relentless that way, the calendar never pausing for life and only briefly for death, and so the Angels will be asked to process, mourn and honor Tyler Skaggs, their beloved 27-year-old lefty who died at the team’s hotel in Southlake, Texas, on Monday, and then go out and entertain the masses.

Little is known about Skaggs’ death – suicide and foul play were swiftly ruled out by Southlake police –  but it’s easy enough to piece together the scant bits of information and realize the unspeakable and sudden tragedy visited upon Skaggs’ family, friends, teammates and the extended baseball community.

And whenever the Angels play again – almost certainly not Tuesday in Arlington, maybe later this week in Houston – they will take the field knowing there’s only one certainty going forward.

You never really do get past it. 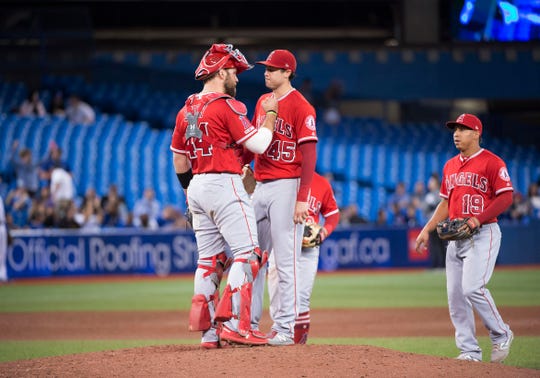 This is an organization that 10 years and three months ago saw a 22-year-old throw the game of his life, only to see it all taken from him by a drunk driver just hours later.

One decade after Nick Adenhart’s passing on April 9, 2009, it’s no less gutting for those that were closest to him.

“There is something to be seen through grief,” Duane Gigeous, Adenhart’s stepfather, told the (Hagerstown, Md.) Herald-Mail this year. “It’s been 10 years since we have been able to talk to him. A lot of individual days go by, but the pain still makes it feel like it was just yesterday. Ten years is a weird thing. He’d be 32 … that’s unfathomable.”

Those 2009 Angels had six months of baseball ahead of them, a season that ended just two victories shy of the World Series. The day they clinched the American League West, staff ace Jered Weaver led the club to the outfield wall at Angel Stadium, where they gathered in front of a logo memorializing Adenhart.

These Angels are 42-43, playoff long-shots but gaining confidence with the return of key players such as outfielder Justin Upton and another generational performance from Mike Trout.

Now they will be missing a man whose charisma, measured swagger and determination were as key to his club as the flashes of brilliance provided by his surgically repaired left arm.

“We have nothing but belief in ourselves,” Skaggs told me in May, when the Angels were starting to cook but still wondered if they could compete with the mighty Houston Astros.

We crossed paths several times over the years, twice in recent months, chit-chatting about the mundane as well as the momentous, be it his selection of West Coast hip-hop tracks that set the morning mood in the Angels’ spring training clubhouse, or his palpable joy at purchasing a home in his native Santa Monica.

Real estate there isn’t cheap, and Skaggs’ $3.7 million 2019 salary that could afford such a domicile was a tribute to his doggedness. Skaggs was drafted by the Angels but traded twice, to Arizona and back to Anaheim in a complex three-team deal, only to see his elbow give and undergo Tommy John surgery in 2014.

In the years since, Skaggs was methodically finding his groove and hitting his stride while battling a handful of minor injuries. His career record was 28-38, but in this offensively charged season, his 4.29 ERA ranked firmly above the league-average plateau. He struck out 78 batters in his 79 innings and, with the Angels 85 games in, was halfway to 30 starts, a benchmark of a healthy, valued starter.

The Angels never lost faith, seeing him through Tommy John rehab and carrying him into his arbitration years. Last December, he married Carli Miles, and it’s not hard to imagine a life they might have dreamed about, perhaps laying down roots for another generation of Skaggs in Tyler’s hometown, where his mother Debbie was a well-regarded softball coach and remains a physical education teacher at Santa Monica High School.

There are innumerable other details and what-ifs the Angels are processing, hopes and dreams that Skaggs harbored and only they and his closest friends and family know. Somehow, they must compartmentalize all that and go compete at the highest level of sport.

Words cannot express the deep sadness we feel right now. Our thoughts and prayers are with Carli and their families. Remembering him as a great teammate, friend, and person who will forever remain in our hearts… we love you, 45. pic.twitter.com/zCO8Ne01Gy

Baseball can’t help but replenish itself, through wins and losses and even tragedy. Someone will replace Skaggs in the Angels rotation, and maybe years from now, a pitcher they drafted just last month will exceed his accomplishments.

Yet there is no replacing the person, particularly an objectively decent and unifying force like Skaggs. Tragically, the Angels already know this all too well.