Home » Sport » A Miami bar offered a free shot for every goal the US scored against Thailand, and the Americans scored a record 13 times

A Miami bar offered a free shot for every goal the US scored against Thailand, and the Americans scored a record 13 times

A Miami bar got more than it bargained for on Tuesday after offering free shots for every goal the United States Women’s National Team scored in their World Cup opener against Thailand.

Ahead of the American women’s opening match, the bar advertised a number of deals onTwitter andFacebook, including $15 Bud/ Bud Light Buckets, $3 Tequila Shots, and $5 Jameson, but one deal stood out beyond the rest — a free shot to go along with every goal the American women scored.

Read more:Women’s World Cup Power Ranking: Where all 24 teams stand at the start of the tournament

“That’s a tradition that we’ve had since we’ve started our chapter,” Director of Social Media & Marketing for the Miami chapter of the American Outlaws Gabriel Miguel, told Business Insider. “When we moved to American Social we said, ‘Hey guys, this is something that we do — every U.S. goal we always give out a free shot.'” 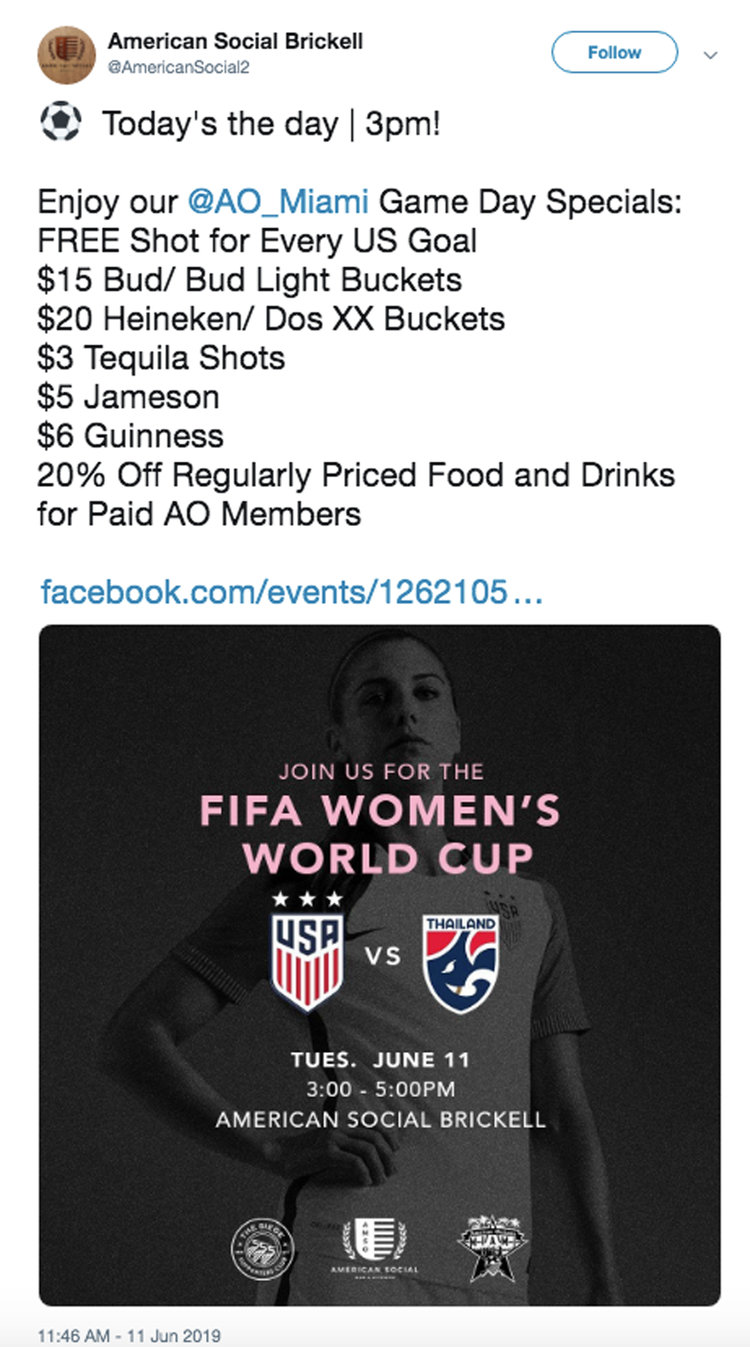 American Social offered fans one heck of a deal.Twitter

With soccer usually a low-scoring affair, the deal normally doesn’t run up too big of a tab at American Social.

But on Tuesday, rather than an extra shot or two to go along with their buckets of Budweiser, fans cheering on the Americans were treated to a record-setting 13-goal performance against Thailand, with Alex Morgan leading the way with five stunning scores.

At halftime, the Americans held a 3-0 lead — far from reckless — but things changed drastically in the second half.

After opening the half with another sustained attack, the United States netted a whopping four goals in just six minutes.

Miguel said that Leo, who was the bartender on duty for the group that day, could at times hardly keep up with the goals.

“Normally he would just pour the shots as they were happening,” Miguel said. “It got to the point where he told us, ‘Okay guys, I have five more rounds made up, do you think we’ll need more?’ and as he’s asking the question, they’re just scoring more goals in the background.”

“I was like, ‘Leo, let’s just make the whole bottle, we’ll worry about it later.'”

Read more:Why the World Cup format encourages teams like Team USA to score as many goals as possible, even in a blowout

When the match finally ended, the crowd of supporters at the bar had grown to about 40, with some who didn’t even initially come for the game.

The Outlaws hope to continue to grow their watch parties throughout the World Cup, and Miguel believes Sunday’s match against Chile could be a huge day for their chapter.

“It’s the only weekend game in the foreseeable future for U.S. women, but it’s Father’s Day, so at first we had expectations a little low for that,” Miguel said. “But so many people are already hitting us up telling us either they’re bringing their dads or they’re leaving their dads at home and coming to this game.”

In a statement to Business Insider, Paul Greenberg, Managing Partner of American Social, congratulated the USWNT and their supporters on their stunning victory:

“What a historic performance! All USA soccer fans had a great time at all of our restaurants and we will continue to cheer on the USWNT team to, hopefully, another World Cup throughout the summer. Our ‘free shots’ promotion is not meant to be taken literally, especially when records are shattered. No one expected this, so instead of passing around shots, we have welcomed our patrons back for a round on us during the match vs Chile on Sunday.”

While the goals meant for fans watching the game at American Social in Miami, every goal of the World Cup also helpsthe American Outlaws raise money for the “You Can Play” project, which is dedicated to “ensuring equality, respect, and safety for all athletes, without regard to sexual orientation and/or gender identity.”

American Outlaws from chapters across the country arepledging money to the campaign for every goal scored by both the women’s and men’s teams in the month of June, including Miguel and the Miami chapter of the organization.

“We’ve committed to that, and I think these 13 goals are a great way to start that off.”

The United States play their second match of the Women’s World Cup on Sunday, facing off against Chile at 12 p.m. local time in Miami.

Should the American women continue their dominant run, there could be few more lemondrop shots coming.