Home » Sport » A scary, heavy-hitting American has ‘knockout power to stop everybody,’ one of the UFC’s top analysts said

A scary, heavy-hitting American has ‘knockout power to stop everybody,’ one of the UFC’s top analysts said 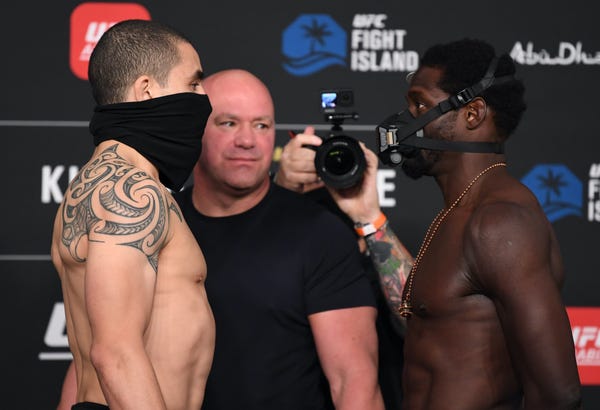 FIGHT ISLAND — A scary, heavy-hitting American has "knockout power to stop everybody" in the middleweight division, one of the UFC's top analysts said.

The 185-pound battle between two of the weight class' top strikers serves as the penultimate match in the Fight Island finale, as the UFC concludes its second pandemic-era residency in the United Arab Emirates.

The stakes are high as the winner will likely be next in line to fight the current UFC middleweight champion Israel Adesanya, who defeated and then dry-humped Paulo Costa in the first main event of the UFC's second Fight Island run last month.

Much is known of Whittaker considering his experience at the top level and his July victory over Darren Till.

Cannonier, however, is an "unknown commodity," according to the former UFC welterweight title challenger Dan Hardy, and that makes him dangerous.

"The thing with Cannonier is that he's a bit of an unknown commodity, especially because we've seen him shift down a weight class," the UFC analyst told Insider.

"He came into the UFC as a heavyweight and he was very fast for a heavyweight with knockout power. But as he's moved down weight classes, the power has stayed but the speed has increased.

"He looks like a strong, powerful individual. And the difference between him and Whittaker, is that Whittaker moves in and out of range while Cannonier steadily walks down and blocks.

"He uses shin blocks, blocks things with his arms. He's comfortable getting into the pocket and trading punches."

Whoever wins could be thrust into a 185-pound title shot

Though Whittaker lost by second round knockout to Adesanya last year, he remains an elite operator, evidenced by two wins over Yoel Romero before the Adesanya defeat, and a strong decision win over Till earlier this year.

Should Whittaker defeat Cannonier on Saturday and secure a rematch against Adesanya, then he will need to change his gameplan going into the title fight, Hardy said.

The Australian made mistakes heading into his match with Adesanya, and he paid the price with a conclusive defeat which saw him surrender his championship to the Nigeria-born New Zealander.

"It's going to take someone with confidence to walk Adesanya down," Hardy told us.

"What we saw with Paulo Costa was that he couldn't get close to him. And it's going to take someone with good striking defense and with patience as well.

"The problem Whittaker had with Adesanya in the first fight was that he wasn't patient. He was trying to prove a point and get him out of there quickly because he was the champion and the interim champion, Adesanya, had all this hype around … so I think there was a bit of an ego hit for him.

"Psychologically, I don't think he was in the right place either.

"But Cannonier is definitely the scary guy in this division and he's got the knockout power to stop everybody."