A Serene, Happy, Centered Antetokounmpo Brings Stress to His Foes

An important part of Giannis Antetokounmpo’s daily ritual, in addition to his nap and his workout, is a 20-minute walk. It clears his head, he said, and gives him a bit of distance from his job playing basketball for the Milwaukee Bucks. Sometimes, he chats with one of his brothers or his mother. Sometimes, he simply enjoys the silence. There are also days when he checks the weather and decides to hop in his car for a short drive instead.

“Milwaukee is very cold,” he said.

He described his walks as therapeutic, helping him stay in the present — a concept that has not always been easy for Antetokounmpo or for the Bucks, whose past disappointments have only fueled speculation about the team’s future.

Where to begin? At the end of last season, after the Bucks made a premature exit from the N.B.A. bubble after losing in the Eastern Conference semifinals as the top seed, questions percolated about Coach Mike Budenholzer’s job security and Antetokounmpo’s contract situation. In free agency, the Bucks botched a sign-and-trade for Bogdan Bogdanovic, which led to the team forfeiting a draft pick for violating the league’s anti-tampering rules.

The Bucks proceeded to stumble through the early months of this season, losing three of their first five games, then five straight in February — a difficult stretch that included two losses to the Toronto Raptors. Milwaukee, a team with championship aspirations and one of the most talented players of his generation, seemed mired in mediocrity. But Antetokounmpo, who has won back-to-back N.B.A. Most Valuable Player Awards, went for his walks (and occasional drives) and kept the faith.

“I think I’ve been doing a better job this year of enjoying this moment and not letting my mind explore as much and start thinking about playoffs, outcome, championship, no championship,” he said in a conference call with reporters this week. “Because at the end of the day, this is a stressful job that we’re doing, and you don’t want to stress yourself out.”

He added, “The outcome — I don’t really care about that. I care about the process, and that helps me here at this moment, talking to you guys.”

By all appearances, it has been a useful strategy. And Antetokounmpo, who went a long way toward eliminating a bunch of stress in his own life by signing a five-year contract extension worth about $228 million before the start of the season, suddenly has the Bucks playing their toughest, most determined basketball of the season. Milwaukee has won 10 of their last 11, including five in a row — a streak the team extended on Wednesday night by erasing a 19-point deficit on the road to stun the Philadelphia 76ers in overtime, 109-105.

After Antetokounmpo scored 7 straight points in overtime, he took a celebratory seat on the court at Wells Fargo Center, where there was a limited number of spectators. Some of them booed.

“Is there something wrong with having fun?” Antetokounmpo asked. (Not at all, Giannis.)

The Bucks’ resurgence has coincided with the return of Jrue Holiday, their starting point guard, who had missed 10 straight games after testing positive for the coronavirus before he was cleared to play on Feb. 28. More help is on the way: The Bucks, according to multiple reports, made a trade with the Houston Rockets on Wednesday for P.J. Tucker, a veteran forward who will add depth and bring playoff experience.

He is joining a team that already ranks among the league leaders in offensive efficiency. Budenholzer, as detailed recently by the Athletic, made a small but significant tactical change this season, positioning an offensive player at what is known as “the dunker” spot — an area along the baseline that is just outside the lane. In past seasons, the Bucks would clear the lane and put players in the corners. But because Antetokounmpo spends so much time on the perimeter handling the ball, having a player near the basket drags a potential help defender away from him, clearing room for him and the team’s other scorers.

“It’s a good move,” 76ers Coach Doc Rivers said before Wednesday’s game. “I thought Golden State did a great job of that. There was a time when Steph Curry was in the dunker spot, which is insane when you think about it, but it worked because it created spacing. If you help, you had to help off him, and then he would pop out to the 3.”

Beyond strategic tweaks and personnel moves, Budenholzer has cited the team’s togetherness — that nebulous idea of chemistry — as a factor in its strong play. It was on full display against the 76ers. The Bucks could not have played much worse in the first half, shooting 26.7 percent from the field and 1 of 17 from 3-point range. They had more turnovers (13) than field goals (12). Antetokounmpo attempted just four shots. It was an aberration. 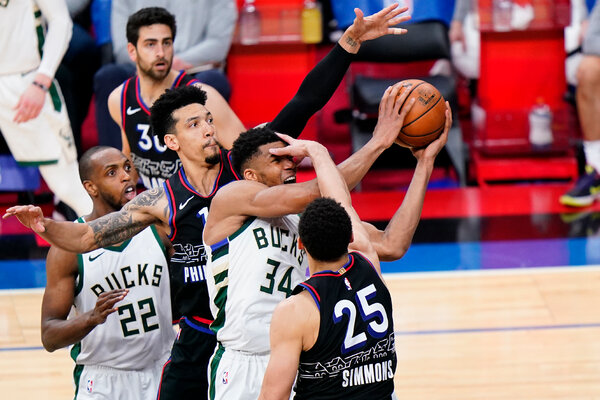 Budenholzer said he could sense energy — among the reserves, and whenever the team was on defense — and that gave him hope. He also knew he could rely on Antetokounmpo, who seems to be having a lot of — what was that word again? — fun. Fun Giannis is bad news for the rest of the league. Against the 76ers, he finished with 32 points, 15 rebounds and 5 assists, snapping his string of three straight triple-doubles in fairly spectacular fashion.

“There’s going to be times when I’ve got to be aggressive, got to go downhill,” he said. “But there are also times when I need to find my teammates. I choose to do both.”

As for the Bucks’ recent legacy of postseason letdowns and all the weighty expectations that will surely greet them again, Antetokounmpo said he was not even allowing himself to think about the playoffs.

“You’re going to be worn out and you won’t have any energy if you think about it every day,” he said. “So right now, I’m just trying to enjoy every moment with my teammates, win or lose. Just be in a good place. And I know myself, I know my teammates, and I know we’re going to try to be ready when the moment is right.”