PARIS — While Amanda Anisimova’s opponents at the French Open have returned to their lodging to relax after matches, Anisimova has headed back to her Paris hotel to do schoolwork.

Anisimova, long home-schooled, is working toward the equivalent of a high school diploma.

But at age 17, Anisimova, an American with Russian roots, is already a successful professional and the latest in a long line of teenagers in women’s tennis whose precocious poise and power have gotten the better of their elders.

“I think Amanda, in the next two or three years, will be in the top of the game,” said Virginia Ruzici, the 1978 French Open women’s champion and the longtime manager of Simona Halep.

Anisimova, who is 5 feet 11 inches tall and wields a two-handed backhand that gives veteran coaches goose bumps, has a chance to rule this year’s French Open after defeating Halep, the defending French Open champion, 6-2, 6-4, in the quarterfinals on Thursday.

“You still have to give her a little bit of time to have her experiences,” Ruzici said of Anisimova, who was set to face Ashleigh Barty of Australia on Friday in a semifinal. “For the moment, she has not much pressure playing like someone like Simona, so when you play without pressure the strokes go freely and the ball goes faster.” 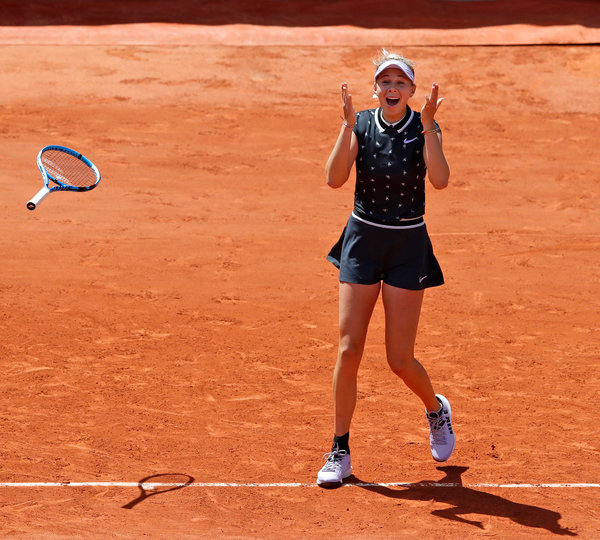 The potential has long been apparent. Anisimova’s mother, Olga, and her father, Konstantin, said they immigrated to the United States from Moscow in 1998 in search of more opportunities for their young daughter, Maria.

Amanda Anisimova was born later, in 2001 in Freehold, N.J., which she learned only this year was also the childhood home of Bruce Springsteen. “Bruce who?” she asked when informed of the connection at the Australian Open in January. (She knows the answer now.)

The family soon moved to Aventura, Fla., to focus on the tennis career of Maria, who went on to play at the University of Pennsylvania and is a director at Bank of America Merrill Lynch. Her younger sister won the United States Open junior title and then played in the French Open for the first time in 2017 at age 15. She is now into the semifinals of a Grand Slam tournament after reaching the fourth round of the Australian Open.

“My sister texted me today, and she was like, ‘Oh my God, I can’t believe it. I’m crying right now,’” Amanda Anisimova said in an interview in the players’ lounge after her victory over Halep. “She came over for a day earlier in the tournament and left, and she wants to come back for tomorrow, so we’re trying to figure it all out.”

Cortés, a former touring pro from Colombia, said he had attended the Nick Bollettieri Tennis Academy in the 1980s when future American stars like Jimmy Arias, Andre Agassi and Jim Courier were boarding there. After his playing career ended, Cortés gravitated to coaching and said he worked for a time with Victoria Azarenka, the future world No. 1 from Belarus, when Azarenka was a junior training in Florida.

Cortés also helped coach Anisimova’s older sister before eventually returning to Colombia, where he has an academy in Bogotá. He recalled seeing Amanda when she was a baby and said he had first met her formally at age 11 and has intermittently advised her and her family about her game.

“She has the best backhand in the world, in my opinion,” Cortés said on Thursday. “She’s a champion, a true champion.”

Anisimova’s father, Konstantin, was her primary coach for an extended period but is no longer in that role. “He still gives me advice and stuff,” Anisimova said of her father, who has worked with other promising juniors in Florida, too.

Cortés took over as Anisimova’s full-time coach in April after helping her before and during the WTA clay court event in Bogotá. She arrived several days before that tournament to train with Cortés, and to adjust to the city’s altitude and fine-tune her game after some deflating results.

“Amanda’s mother called me and said, ‘We are thinking of going to Bogotá; do you think you could help her?’” Cortés said. “I said yes, but bring her by yourself. I don’t want anybody else. I can help you. Give me an opportunity, because I have never been by myself with her with really me taking care of everything, controlling the situation, the practice, the balls, the system, the structure before and after matches.”

Anisimova went on to win the title — her first on the WTA Tour.

“He’s helped me a lot with mentality and just believing in myself more,” Anisimova said of Cortés. “Just helping me stay positive.”

Like many a younger (and older) tennis player, Anisimova has sometimes struggled with controlling her emotions on court. But though she kept her focus remarkably well against Halep, she still showed occasional signs of frustration after errors, even when in the lead.

“That’s because when I was up I was really trying not to think I was up,” Anisimova explained. “Because I knew if I’m playing Simona, this can turn around very quickly. You can be up 6-0, 5-0, and she can still win the match, because she’s a champion. So I was just trying to play perfect tennis, because that’s what I had to do to win today.”