Arsenal and Chelsea fans arrive at the Olympic Stadium in Baku

The two London clubs meet in the first of two all-English European finals this week in the Azerbaijani capital.

Despite the travel difficulties presented by a near-3,000 mile trip to Eastern Europe they appeared in high spirits ahead of the big game.

Fans from both teams were in fine voice in the stands ahead of the game, even though only 6,000 were expected to have travelled from England. 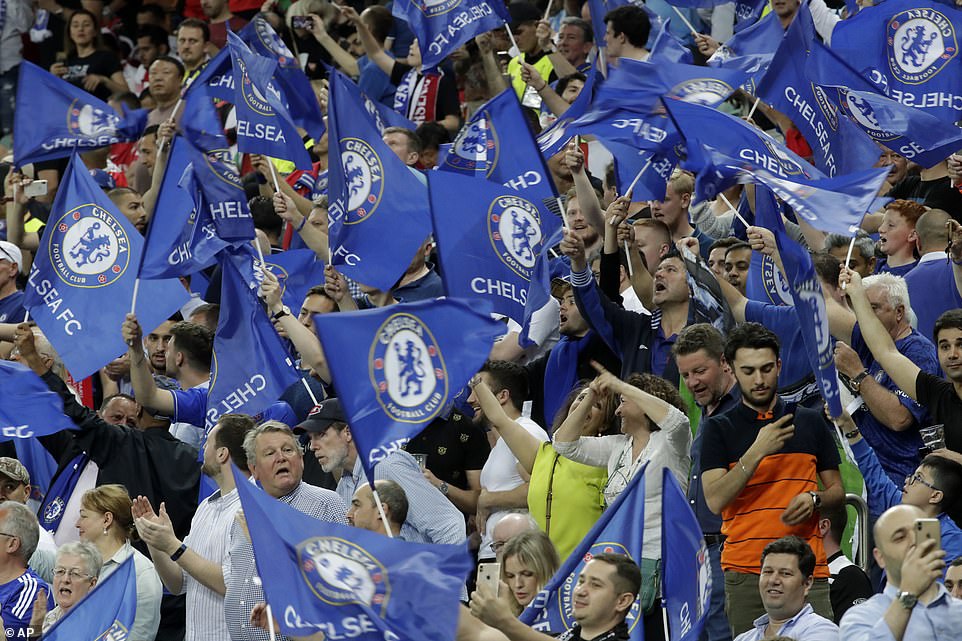 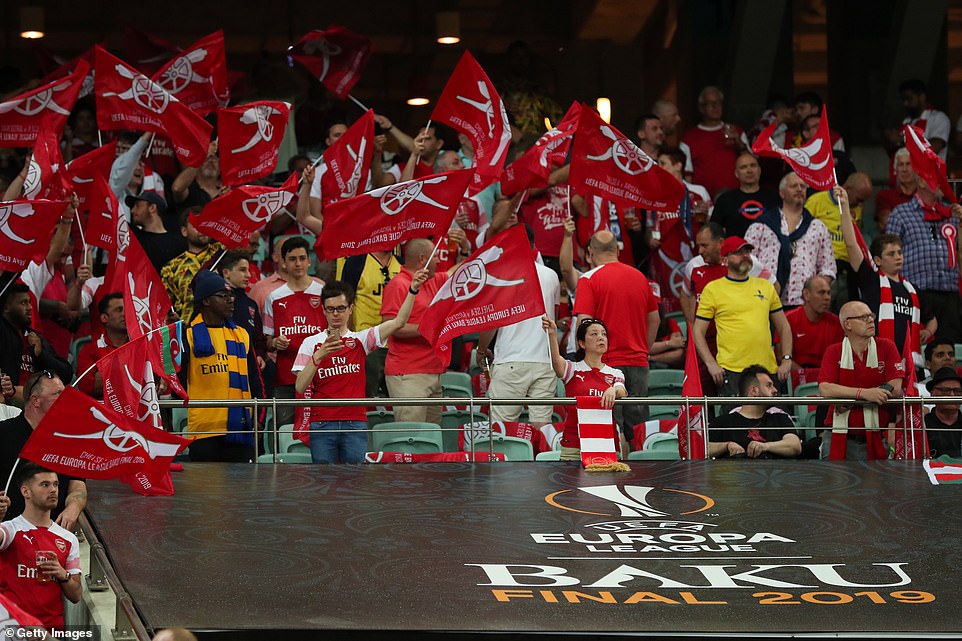 Supporters also posed for pictures and selfies outside the stadium, which glowed a bright orange as night set in. One of them even dressed up as Big Ben, to bring a flavour of London to the occasion.

Plenty of locals were out in force with just 6,000 Arsenal and Chelsea fans expected to have made the trip from the UK.

Both clubs were allocated 12,000 tickets between them for the showpiece final at a stadium which boasts a 69,870.

But they have ended up sending around half of their tickets back, with fans encountering great difficulties in terms of travel and cost. 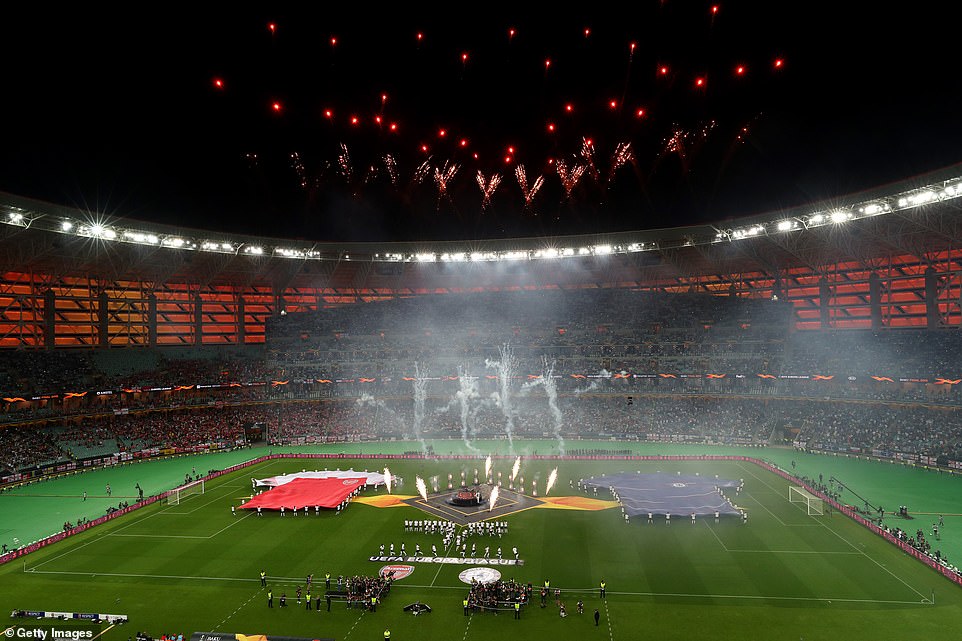 A spectacular firework display took place ahead of tonight’s kick-off, though much of the ground still appeared to not be filled 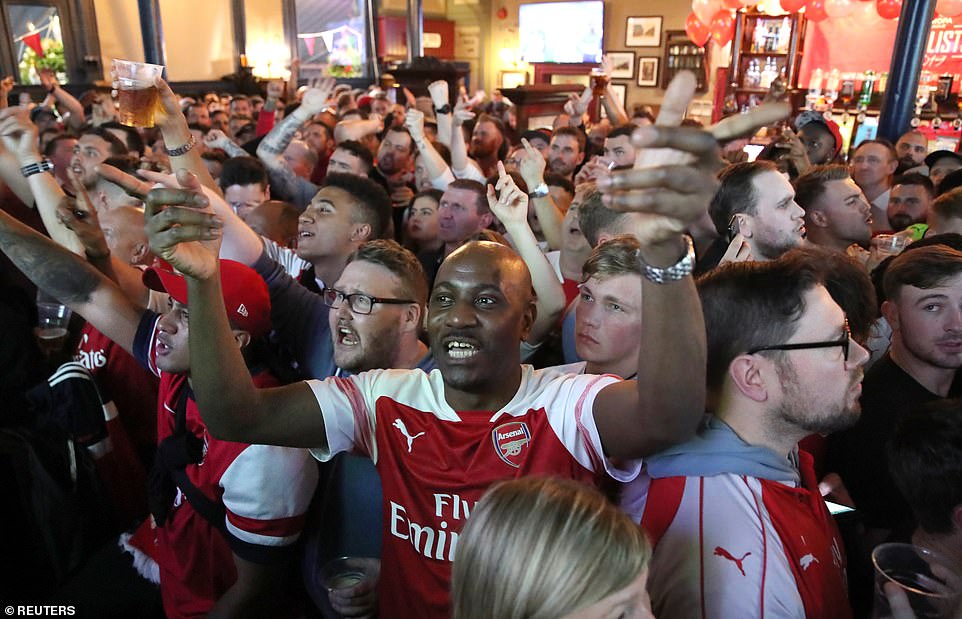 Arsenal fans who didn’t manage to get tickets watching the Europa League Final at the Twelve Pins Pub in Finsbury Park, London 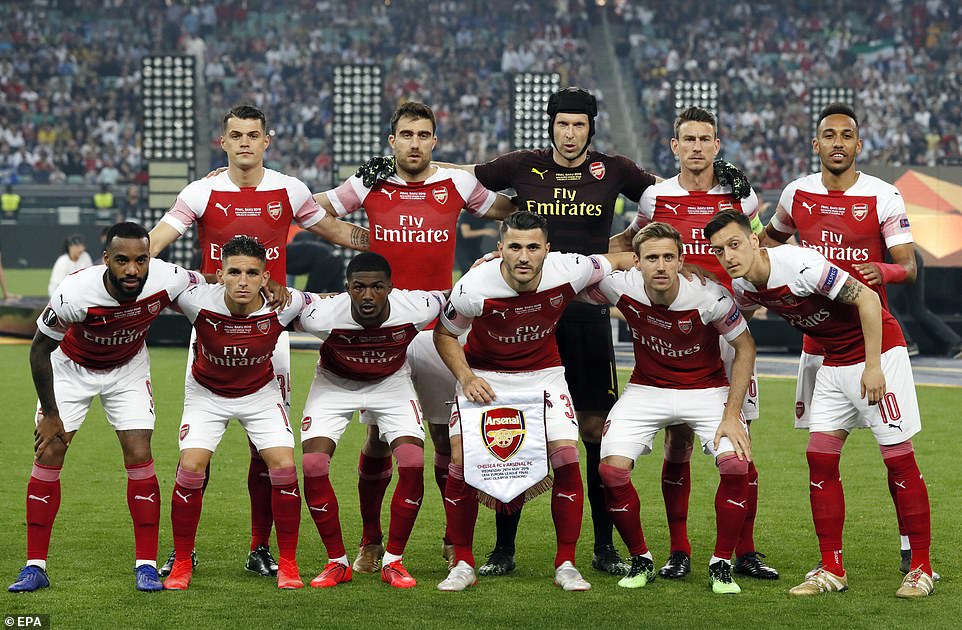 Arsenal’s team line-up ahead of tonight’s final against fierce local rivals Chelsea. The match is Arsenal’s last chance to qualify for the prestigious Champion’s League next year 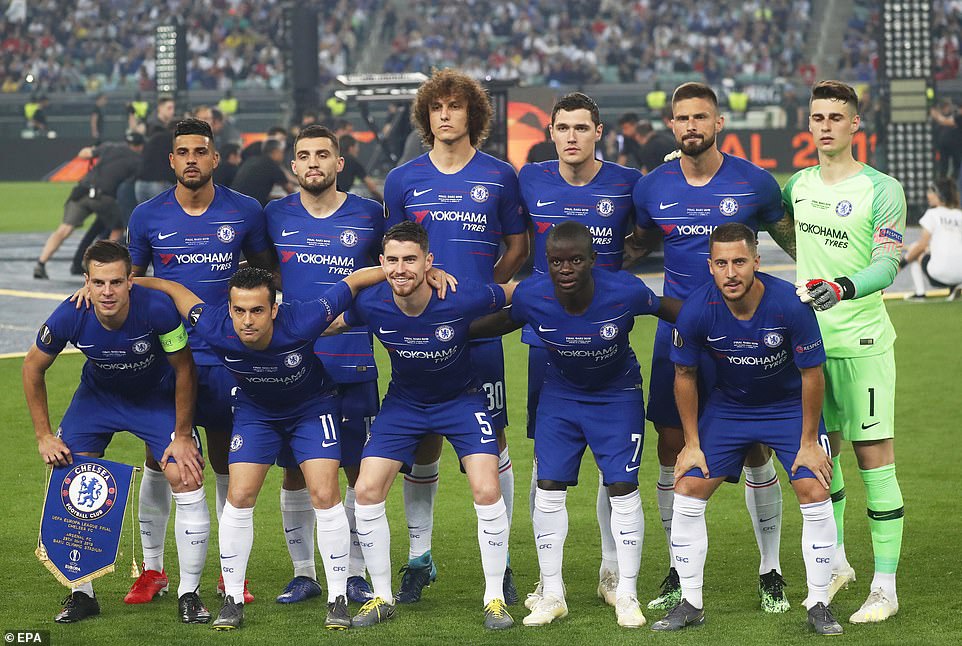 Players of Chelsea line up for the UEFA Europa League final between Chelsea and Arsenal at the Olympic Stadium in Baku, Azerbaijan, 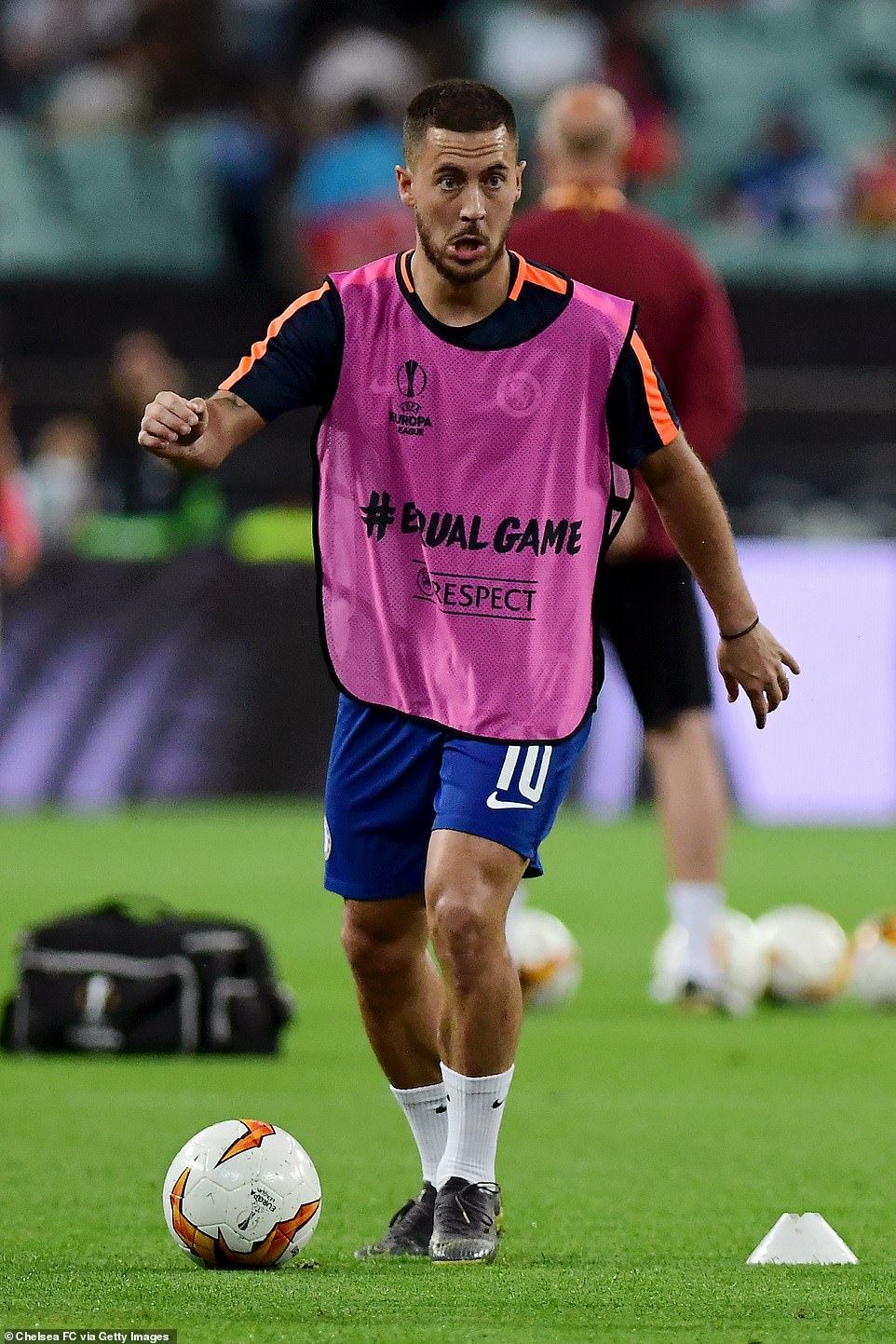 Eden Hazard, Chelsea’s best player and widely seen as one of the best in the world, warms up ahead of the 8pm kick off 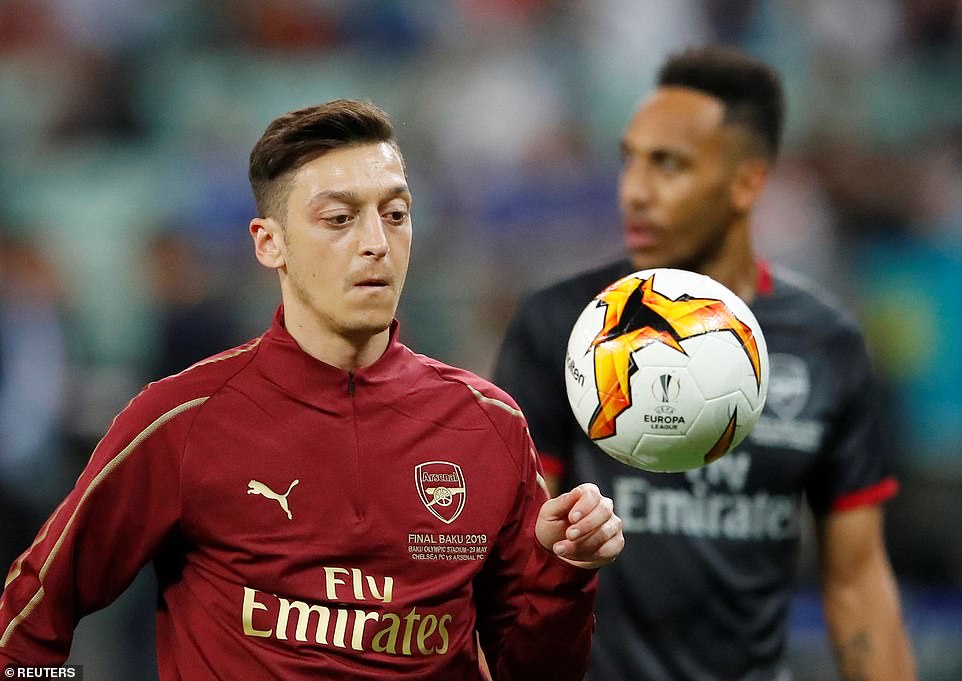 Arsenal’s Pierre-Emerick Aubameyang and Mesut Ozil during the warm up before the match. Both players are expected to have a crucial role in tonight’s game 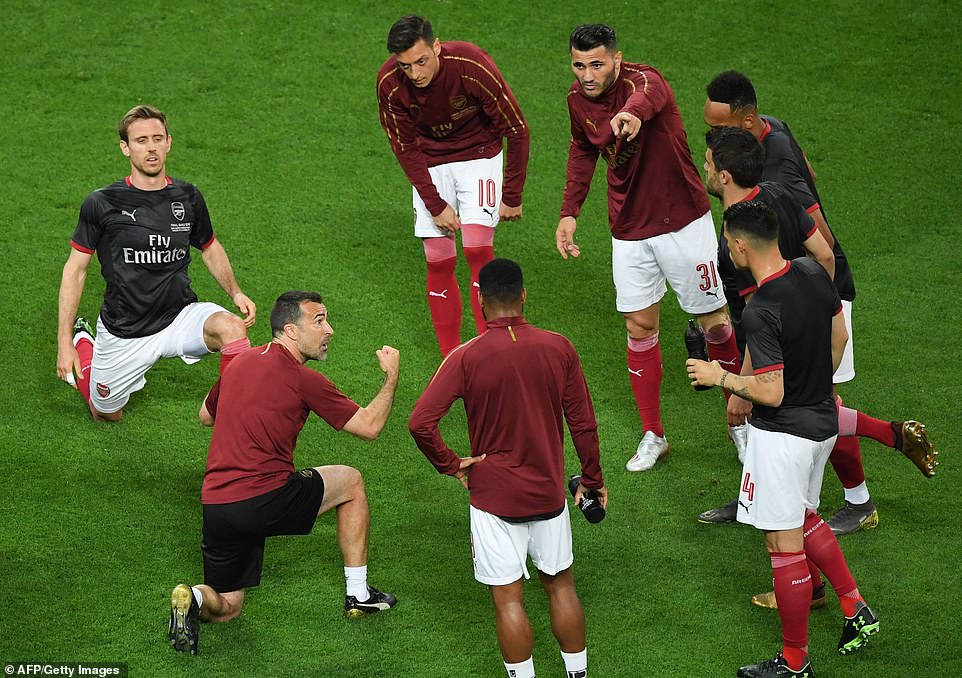 Arsenal players warm up ahead of the game, which is the only chance for both teams to end the season with a trophy 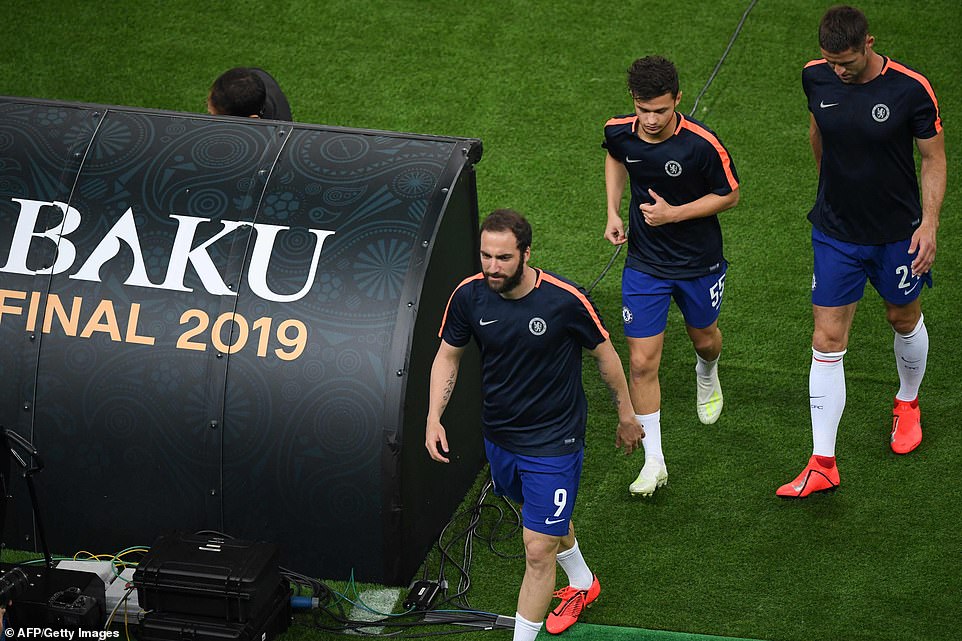 Chelsea’s Argentinian striker Gonzalo Higuain, English midfielder George McEachran and English defender Gary Cahill leave the pitch after the warm up prior to the match 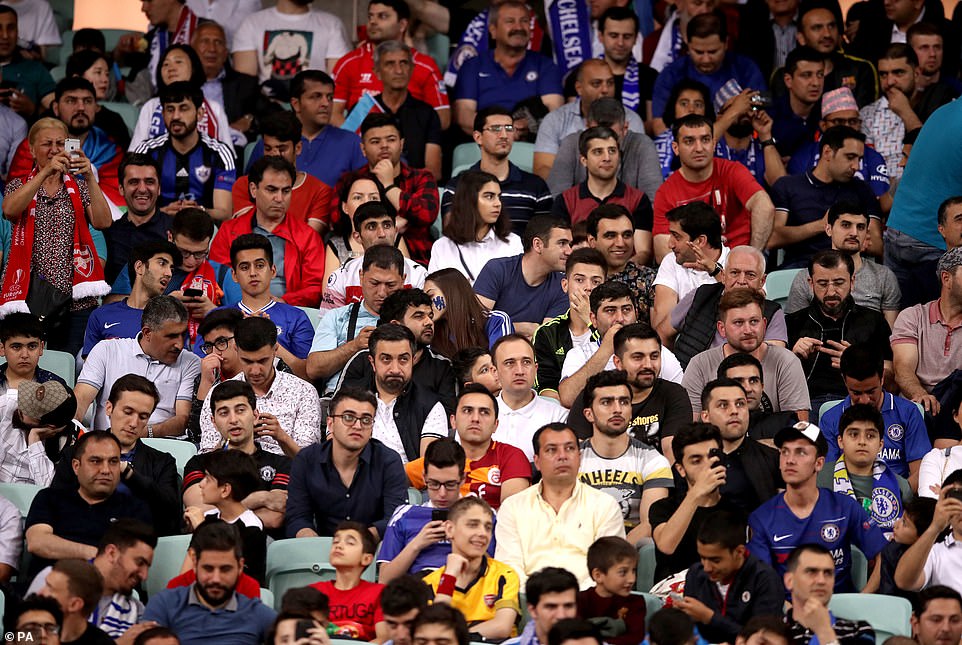 Local football fans in the stands before the UEFA Europa League final at The Olympic Stadium in Baku, the capital of Azerbaijan 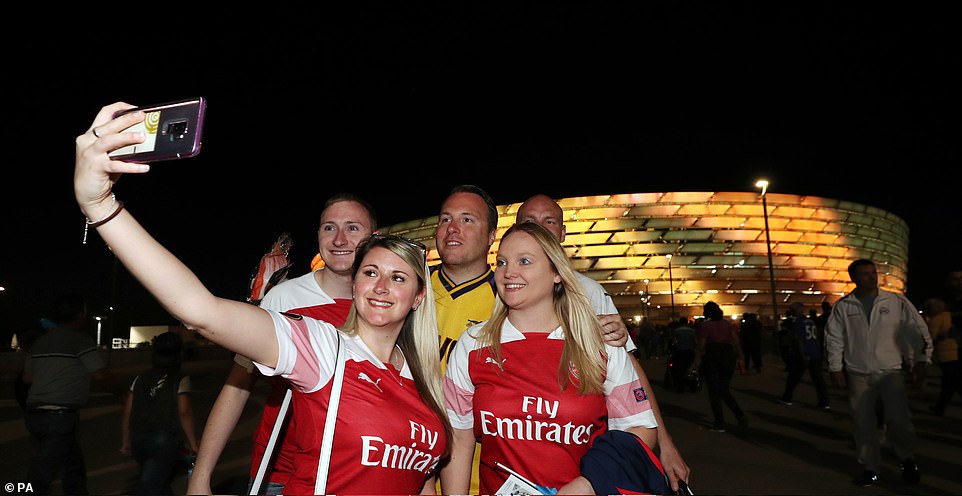 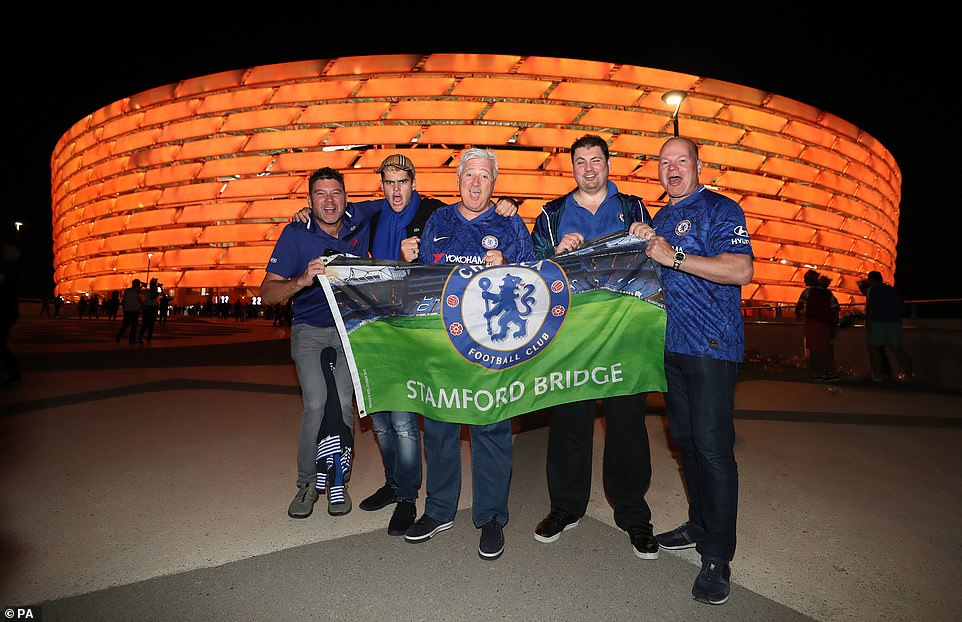 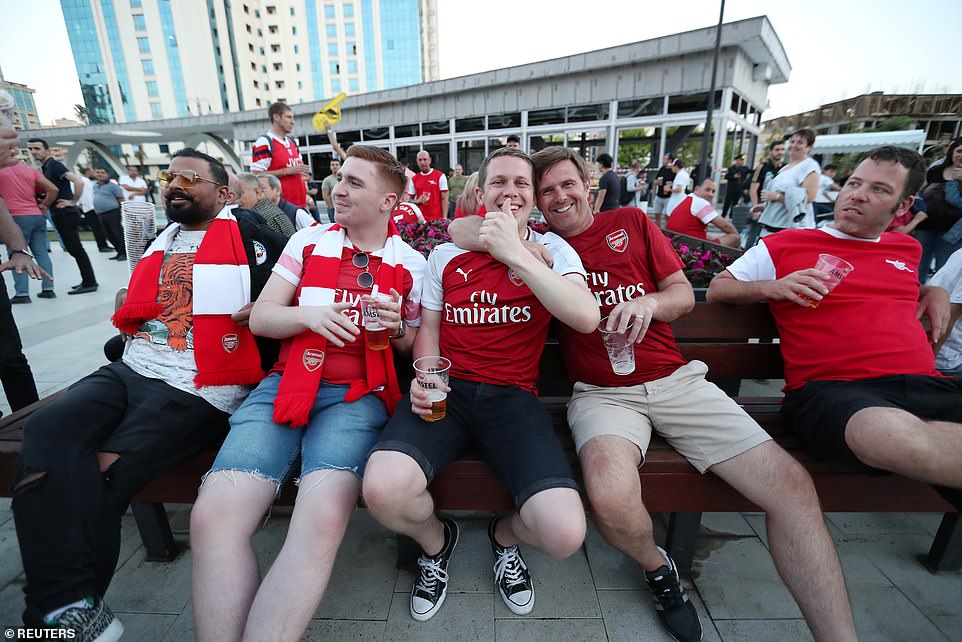 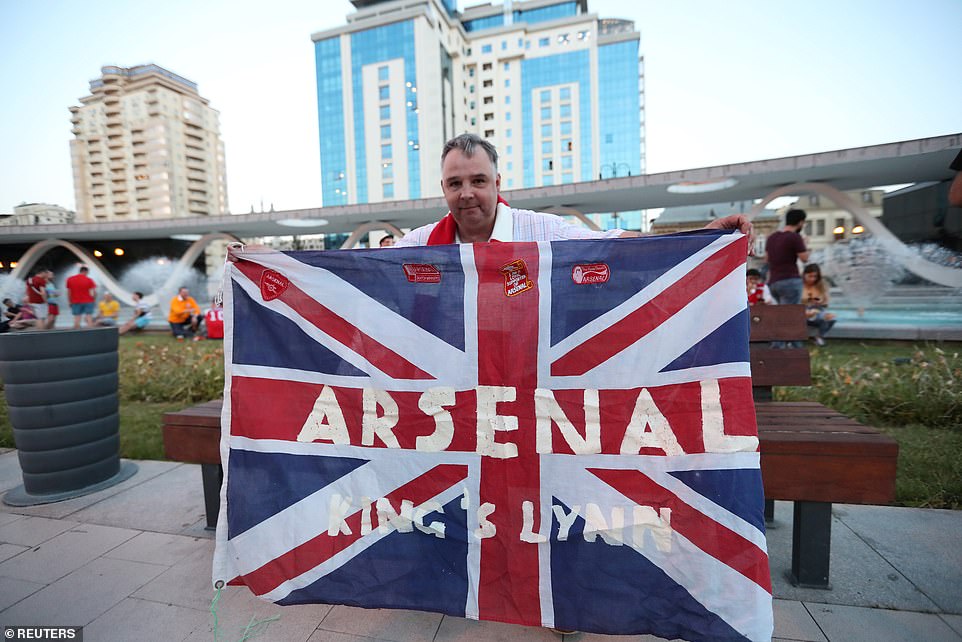 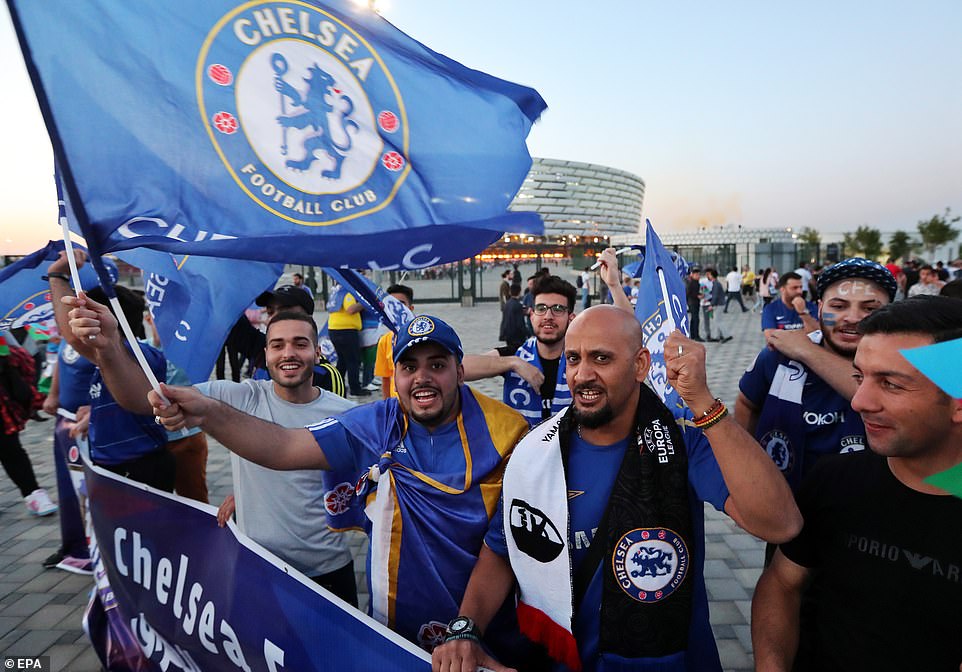 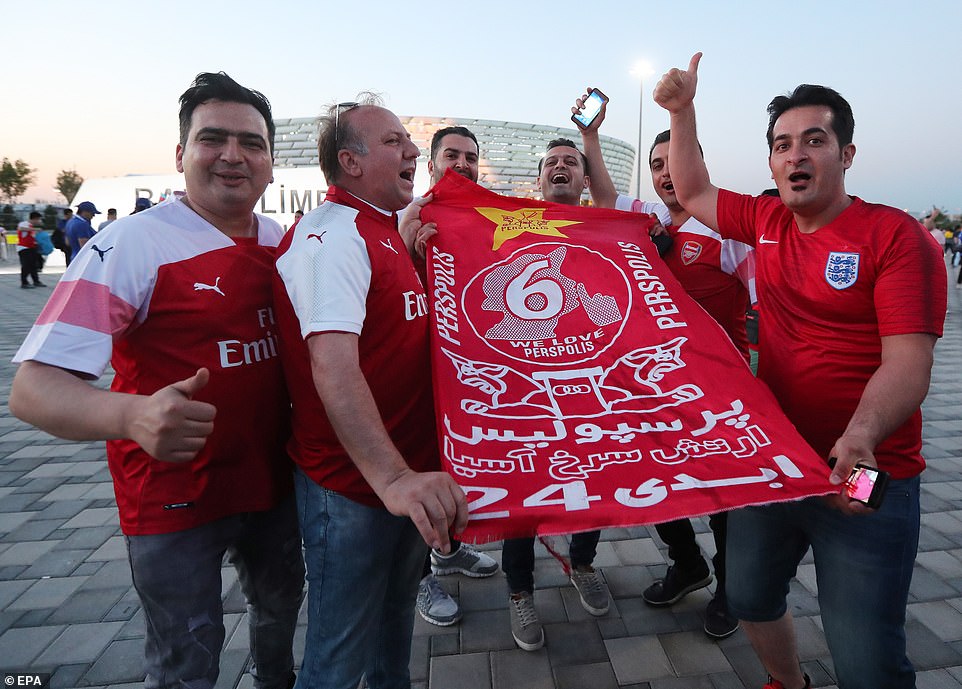 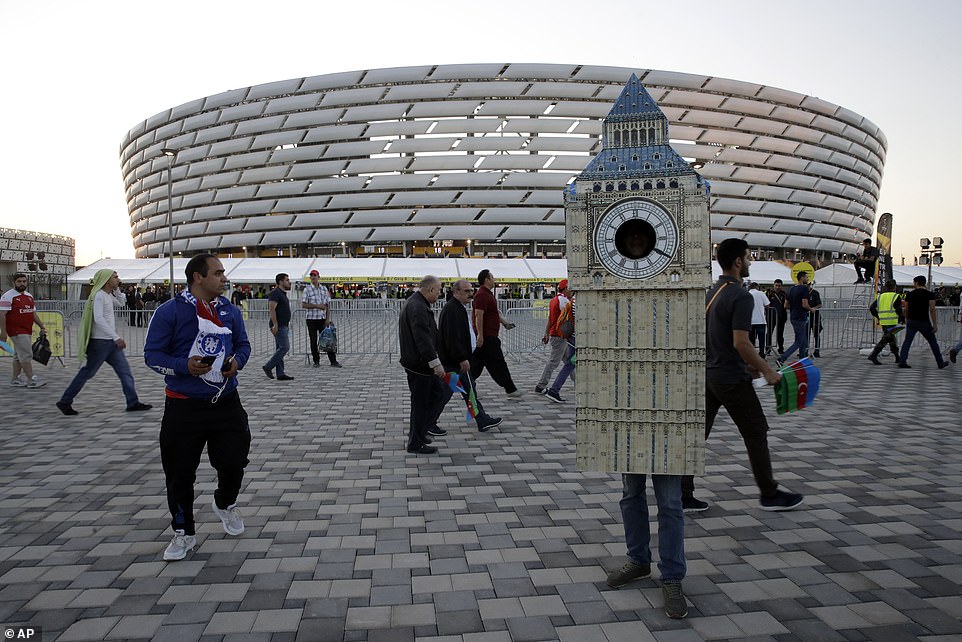 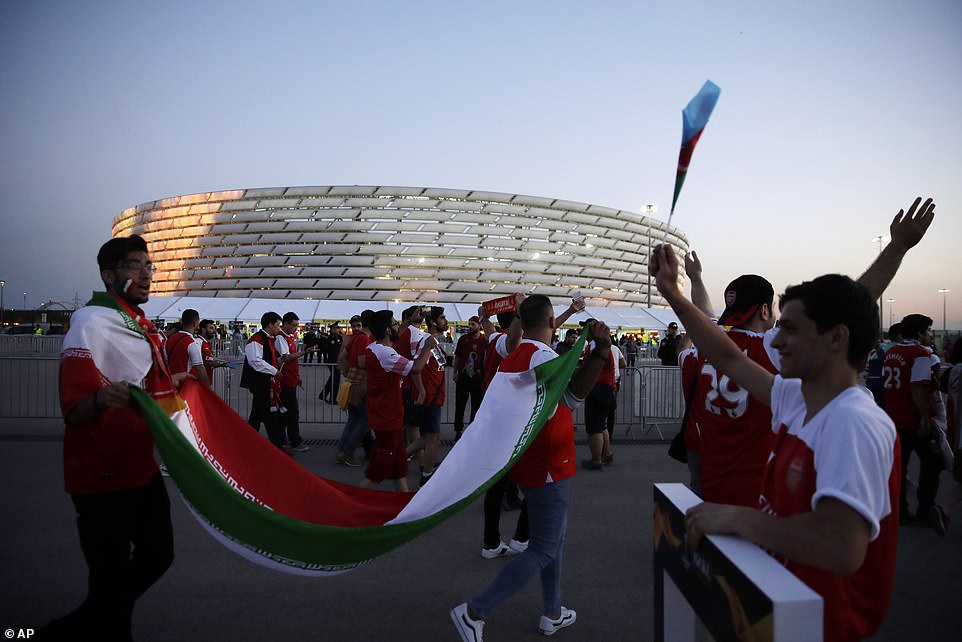 Kick-off in Baku is at 8pm BST, 11pm local time in Azerbaijan.

Earlier in the day it was reported that two fans had been injured in violent clashes.

Local reports in Baku state that two supporters were taken to hospital overnight and treated for their injuries.

Baku-based newspaper Haqqin.az broke the story on Wednesday morning, though there has since been no confirmation from either of the clubs.

Azerbaijan Health Ministry spokesman Parviz Abubekirov revealed that one British fan was hospitalised with an open head wound and bruising ‘as a result of an altercation between fans of the two football teams.’ 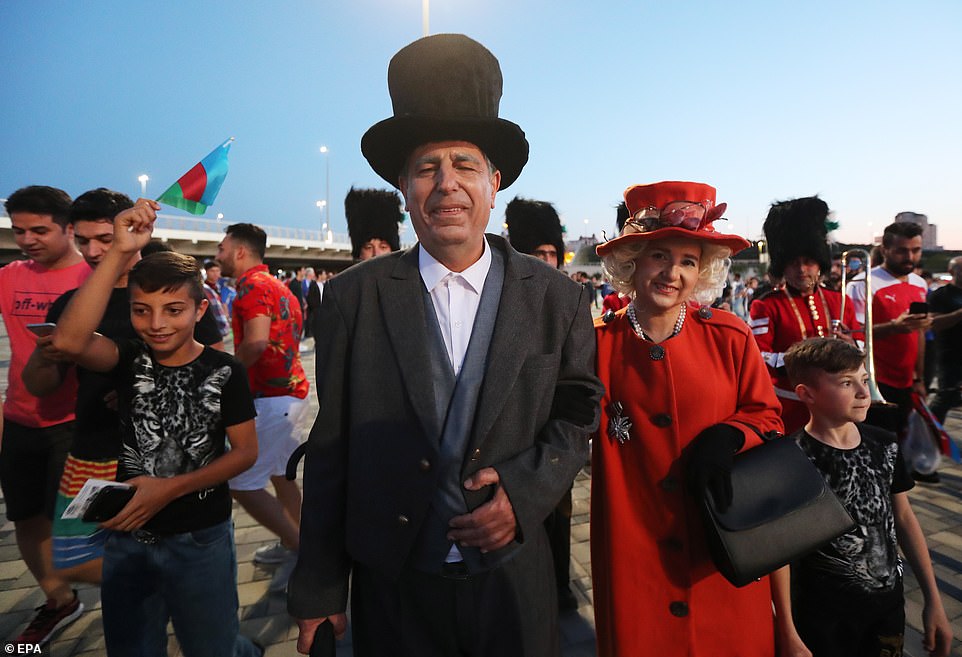 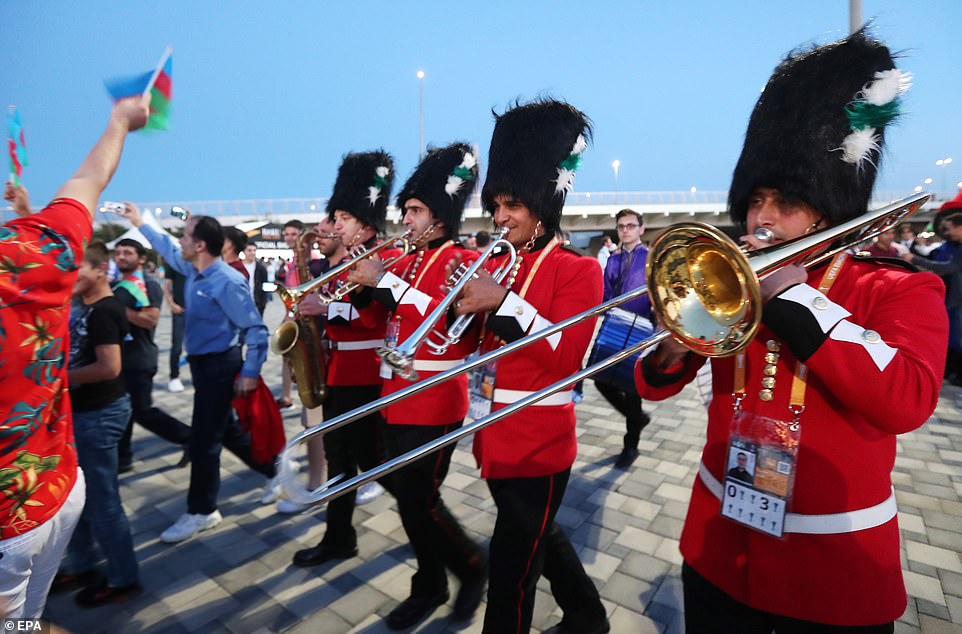