As Olympics Barrel Ahead, Chorus of Critics Adds Powerful Voices

It is the question everyone is asking, the question that won’t go away, the one for which millions have an opinion but no one has an answer:

Will the Tokyo Olympics happen this summer?

The organizers last week declared they had entered what they coined “operational delivery mode” for the Summer Games, another clear signal that they will plow ahead toward the opening ceremony, scheduled for July 23 in Tokyo, regardless of the state of the coronavirus pandemic.

It remains clear, too, that their optimism will be accompanied every step of the way by a stream of strident naysayers, worried experts and inauspicious omens.

Widely documented polling in Japan continues to show that most of the country’s population is wary, wanting the Olympics to either be postponed again or canceled outright; the United States Department of State this week issued a Level-4 travel advisory for Japan — “Do not travel” — that served as an ominous indicator of the state of the virus fight there; and members of the global health community, prominent business leaders and at least one key Olympic partner continue to voice concerns about the dangers posed by proceeding with the Games.

One of the latest warnings came Tuesday in an article published by the New England Journal of Medicine, in which a group of public health specialists harshly criticized the International Olympic Committee’s so-called playbooks — the colorfully illustrated packets detailing countermeasures designed to keep athletes, other Olympic visitors and the broader Japanese population safe from the virus.

In the article, the specialists suggested the playbooks — created by the I.O.C. in consultation with the World Health Organization — lacked transparency, were insufficiently detailed, and focused at times on science that was outdated or irrelevant to ensuring the event could be safe. The authors stopped short of arguing for a cancellation of the Games, but said the risk was too high to ignore.

“All along the way there’s been an ignorance of science,” Dr. Annie Sparrow, a global health specialist and the lead author of the article, said of the I.O.C. in an interview. “It’s not rocket science to hold a safe Olympics. It’s basic medical science. But that’s what the I.O.C. has ignored, and I don’t know if they’re going to start paying attention now.”

The I.O.C., which will publish the third and final iteration of its playbook next month, has trumpeted the partnership it established last year with the W.H.O. in an attempt to build confidence in the viability of its health protocols.

But Sparrow, a former adviser to Dr. Tedros Adhanom Ghebreyesus, the director-general of the W.H.O., and her three co-authors urged the health organization’s membership to convene emergency committee meetings ahead of the Tokyo Games, just as it did before the 2016 Rio Olympics amid widespread outbreaks of the Zika virus.

“There are issues around participant safety that haven’t been fully addressed,” said Michael Osterholm, the director of the Center for Infectious Disease Research and Policy at the University of Minnesota and another author of the journal article. “You’re only as strong as your weakest link.”

In Japan, where only a tiny fraction of the population has been vaccinated, protesters have carried their anger to the streets, including at a large demonstration this month outside the national stadium in Tokyo. Prominent, outspoken critics in the country have included Hiroshi Mikitani, the founder of the online retail giant Rakuten, who called the Olympics a “suicide mission,” and the technology billionaire Masayoshi Son, who warned on Twitter that Japan’s economy had far more to lose than Olympic officials.

An online petition to cancel this year’s Games collected around 400,000 digital signatures in relatively short order, and on Wednesday the Asahi Shimbun newspaper, an official partner of the Olympics, took that position in an editorial, calling on Japan’s prime minister to “objectively assess the situation and decide on the cancellation of the event this summer.” 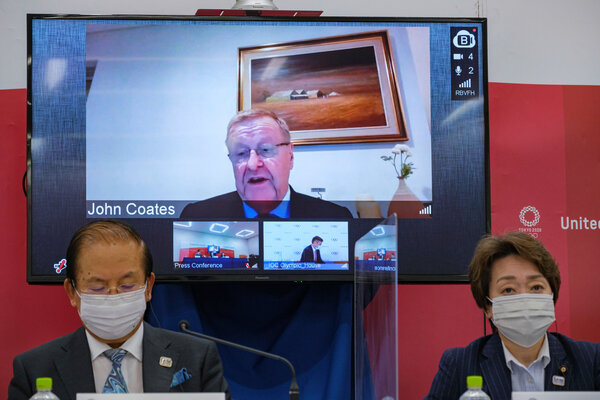 Hours earlier, Sparrow and her co-authors had warned that flaws in the current protocols could undermine the other efforts by organizers to avoid having the Games become a superspreader event.

“No one can look at Simone Biles doing her flips and not think, ‘I want to watch her do that in Tokyo,’” Sparrow said. “We’ve got two months left. What can we do to make it safer?”

Among other things, they criticized the playbooks’ focus on countermeasures like disinfecting surfaces and temperature checks, which they called ineffective; the lack of specialized guidelines for different competition venues, common spaces and sports; the use of contact-tracing and health-reporting apps, which they called inferior to wearable trackers; and the possibility that athletes were at a higher risk of infection by sharing rooms in the athletes’ village.

The authors also laid out in stark terms how little the landscape had improved in the past year.

“When the IOC postponed the Tokyo Olympics in March 2020, Japan had 865 active cases of Covid-19 against a global backdrop of 385,000 active cases,” the article said, noting that many people had assumed the pandemic would be under control by 2021. “Fourteen months later, Japan is in a state of emergency, with 70,000 active cases. Globally, there are 19 million active cases.”

Such troubling numbers were behind the State Department’s decision on Monday to warn Americans not to travel to Japan. (The recommendation was mostly symbolic; nonresident foreigners have largely been banned from entering Japan since the middle of last year.)

Still, the alarming advisory — Level 4 is the highest possible warning — did not immediately change the United States Olympic and Paralympic Committee’s outlook on attending the Games.

“We feel confident that the current mitigation practices in place for athletes and staff by both the USOPC and the Tokyo Organizing Committee, coupled with the testing before travel, on arrival in Japan, and during Games time, will allow for safe participation of Team USA athletes this summer,” a spokesman for the U.S.O.P.C. said in a statement.

Aware of the perception that Olympic officials and local organizers are pressing ahead with the Games despite valid health concerns, officials continue to emphasize initiatives they say will make them safer. While vaccines are still not a prerequisite for participating in the Games, for example, Thomas Bach, the president of the I.O.C., said last week that he expected 80 percent of the residents of the athletes’ village would be vaccinated before they arrive in Japan. (Sparrow challenged the I.O.C. to reveal the data supporting that figure. “There’s no way he can identify a source for that,” she said. “It’s wishful thinking.”)

At the same time, critics continue their calls for the Games to be canceled. They added to their ranks this month the Tokyo Medical Practitioners’ Association, an association of 6,000 professionals in Japan’s capital, which wrote an open letter to Prime Minister Yoshihide Suga and the event’s organizers calling for the Games to be scrapped in order to relieve pressure on the nation’s health system.

Amid all this, the unyielding march of the calendar toward the opening ceremony continues: Wednesday marks 58 days until the start of the Games.