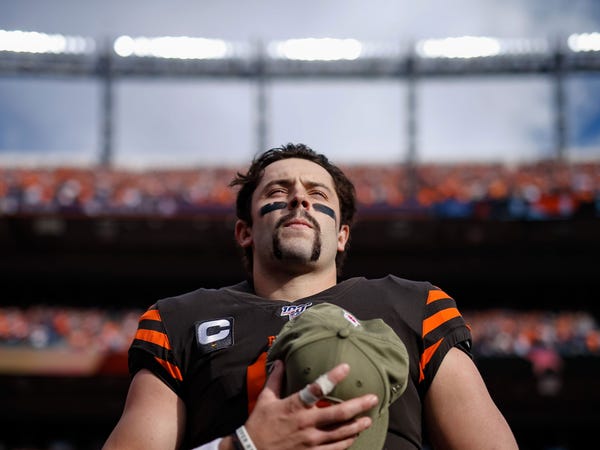 Cleveland Browns quarterback Baker Mayfield will stand for the national anthem ahead of his team's Week 1 matchup against the Baltimore Ravens.

Mayfield had said earlier in the offseason that he planned on kneeling for the anthem during the 2020 season, but in a statement put out on his Twitter account Saturday, the Browns quarterback wrote that he had reconsidered his decision.

"After reading many letters and messages… I have been showed that a gesture such as kneeling will only create more division or discussion about the gesture, rather than be a solution towards our country's problem at hand," Mayfield wrote. "With that being said, I am choosing to stand for both anthems to show respect, love, and unity to everybody involved."

Mayfield's noting of "both" anthems is in reference to the national anthem as well as "Lift Every Voice and Sing," known as the Black national anthem, which will be played before games across the league on Sunday.

The statement is a significant about-face from Mayfield's comments in June.

"Everybody so upset about my comment doesn't understand the reason behind kneeling in the first place," Mayfield wrote at the time on his Instagram account. "I have the utmost respect for our military, cops, and people that serve OUR country. It's about equality and everybody being treated the same because we are all human. It's been ignored for too long and that it my fault as well for not becoming more educated and staying silent."

"If I lose fans, that's okay. I've always spoken my mind," he added. "And that's from the heart."

In Week 1 of the NFL season, teams are weighing what they'll do during the national anthem. During Thursday night's opening game between the Chiefs and Texans, Houston decided to remain in the locker room for the anthem. The team was subsequently booed when they stood arm-in-arm with the Chiefs for a moment of silence "dedicated to the ongoing fight for equality."

That same night, the Miami Dolphins announced on social media that they would also remain in the locker room for the anthem ahead of their game against the New England Patriots, and called out the NFL for its "fluff and empty gestures" in regard to social justice.