Ben Foakes insists England are prepared to contend with more difficult conditions as they bid to square the series against India in the fourth and final Test in Ahmedabad next week.

The surface at Narendra Modi Stadium – which is also the venue for the fourth Test beginning on Thursday – came under considerable scrutiny following India’s 10-wicket triumph in the third Test.

England were beaten inside two days in the shortest completed Test match since 1935, and Foakes admits England are under no illusions about the conditions that await them in the series finale.

“I think we know what we are going to get,” said Foakes, speaking at a virtual press conference.

“They are pushing their conditions to the extremities and we know it’s going to spin quite considerably from ball one, so I think it’s more just about trying to find a way to play well in those conditions.”

Foakes has received plenty of plaudits for his performances with the gloves over the last two Tests, and the Surrey wicket-keeper admits it’s been the toughest challenge of his career to date.

“I’d say the last two games are probably the hardest pitches I’ve kept on,” he added.

“They’ve been challenging and I think the last game it might be to do with the pink ball, but the amount it was either skidding or spun. “I’ve probably not seen or experienced a wicket like that before, so it was a good challenge to keep on, and one I enjoyed.”

Foakes came into the side after Jos Buttler travelled home after the first Test, as part of England’s commitment to rotate their multi-format players amidst a gruelling 2021 schedule.

It marked Foakes’ first Test appearances for over two years, and he’s once again impressed in subcontinental conditions, having made a debut hundred against Sri Lanka in November 2018, while also keeping magnificently.

Buttler’s red-ball credentials had been questioned following an inconsistent spell with the bat, although since last summer, he’s performed with aplomb to establish himself as England’s premier wicket-keeper.

England have previously opted to select both Buttler and Jonny Bairstow in the same Test side, but Foakes has played down suggestions that he and Buttler could feature in tandem in the future. 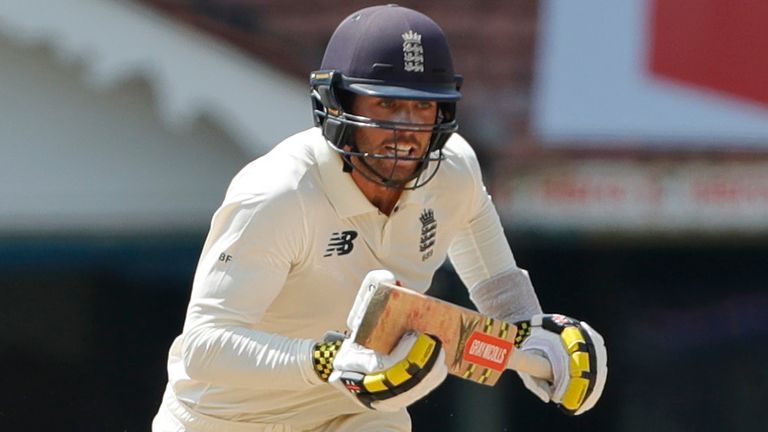 “I’m looking at it as a chance to play another Test in India. It’s an amazing experience to do it and I’m purely looking at how in the next game I can do well, rather than the bigger picture.”

“We’ve got a lot of good players. Jos did a fantastic job when he was playing and we’ve got six guys who are amazing batters and a couple extra on the sidelines that are wanting to get in,” the 28-year-old continued.

“Looking ahead I’m not too sure but I know we’ve got a lot of options, so it will be tricky to get us both in.

“I’m looking at it as a chance to play another Test in India. It’s an amazing experience to do it and I’m purely looking at how in the next game I can do well, rather than the bigger picture. Just take it one game at a time.”

England enjoyed a terrific start to the four-match series, inflicting India’s first Test defeat on home soil since 2017 with a comprehensive 227-run success in Chennai, although Virat Kohli’s men have responded magnificently.

The tourists have toiled against India’s world-class spin duo of Ravichandran Ashwin and Axar Patel, who have taken 33 wickets across the last two matches, with England posting miserly totals of 134, 164, 112 and 81. However, the tourists were the last side to deny India a home series win back in 2012, and Joe Root’s side can square the series with victory in the fourth Test in Ahmedabad, so they require no further incentive.

“We’ve been completely outplayed in the last two games but we are still in a position to draw in India and if we can put a good performance in and get a 2-2 draw,” Foakes added.

“We are in with a chance of a pretty awesome achievement if we can win this last one.

“It’s obviously going to be difficult knowing the sort of surface they’re going to play on, but we’ve just got to better than we were in the last game. If we can do that and perform a bit better and put pressure on them, we’ve got a chance.”