There was once a home in Houston. It teemed with amenities, and on the outside it shimmered. But inside, termites gnawed at the floors, a sewage pipe neared bursting and structural issues diminished its value.

The Texans are that home. And the caretaker — and architect — was Bill O’Brien, who was fired on Monday for letting it lapse into disrepair. The projects O’Brien favored over the past 16 months or so turned the Texans from the envy of their neighborhood into a fixer-upper blighted by weeds in the yard.

As a leading voice in personnel matters and, as of January, the team’s general manager, O’Brien flipped premium draft picks in several deals and dealt one of the N.F.L.’s best receivers, DeAndre Hopkins, to Arizona for a relative pittance. As the Texans’ coach, O’Brien guided them to four A.F.C. South titles in his first six years but a winless start to this season through four games.

The final indignity came Sunday, when the Texans lost, 31-23, at home to Minnesota after defeats to the conference behemoths Kansas City, Baltimore and Pittsburgh. Only the Jets and Giants, who were expected to be dreadful this season (and are), have worse scoring differentials than the Texans’ minus-46.

At their apex, the Texans boasted Hopkins, defensive ends Jadeveon Clowney and J.J. Watt, safety Tyrann Mathieu and the cornerstone quarterback Deshaun Watson — stars who positioned them for potential glory. All who are left are Watt and Watson, who have watched the team’s depth and quality erode around them, especially since blowing a 24-point lead to Kansas City in the playoffs after the 2019 season.

The front office mortgaged the future by compromising draft capital — Houston didn’t make a first-round pick in 2020 and doesn’t have a first- or second-rounder in 2021 — and subsequently depleted the roster of young talent on team-friendly contracts. Trading Hopkins and a 2020 fourth-round pick, for the running back David Johnson, a 2020 second-round pick and a 2021 fourth-rounder, left Watson without a dominant No. 1 receiver in a league that prioritizes passing. Collectively, the moves ratchet up the difficulty for O’Brien’s successor as general manager, who must figure out a way to maximize Watson’s prime while gaining more financial flexibility.

Even if the timing of O’Brien’s dismissal is peculiar — ownership empowered him to expend precious draft picks, award over-market extensions and contracts and also deal Hopkins, but then fired him just four losses into this pandemic-afflicted season in which a seventh team from each conference now makes the playoffs — the Texans, at least, have a head start on vetting possible replacements.

The associate head coach Romeo Crennel, a former head coach with Cleveland and Kansas City, will coach the Texans for the remainder of the season. In a league where about three-quarters of the players are people of color but most coaches and executives are white, Crennel, who is Black, raises the number of nonwhite head coaches to five.

Around the N.F.L., owners of struggling teams must decide whether to follow Houston’s example or trust their coaches to accomplish what O’Brien could not do well enough this season: spackle the holes. Here are a few other places where the season has turned ugly already: 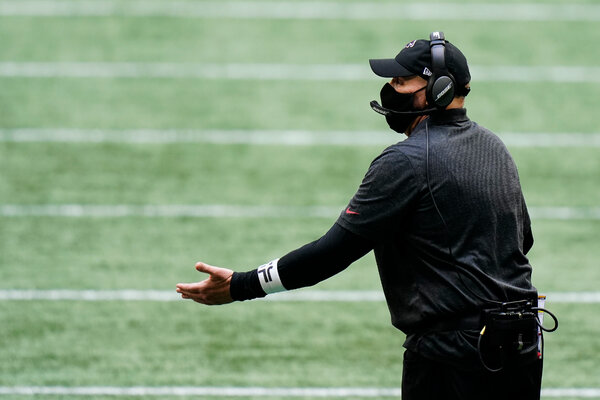 The play that inspired a thousand memes — the staring contest as the Cowboys’ onside kick in Week 2 just rolled on by — encapsulates the scope of Atlanta’s despair. It is hard to win in the N.F.L., but the Falcons make it needlessly so. Their defensive collapses reflect poorly on their defensive-minded coach, Dan Quinn, who, heading into Monday night’s game at Green Bay (a 30-16 loss), had presided over six of the 15 worst blown leads in franchise history. Two came in consecutive weeks — 20 points at Dallas, 16 against Chicago — while the other came in some big game, a Super Bowl or something, a few years back. The Falcons’ owner, Arthur Blank, is a patient man, but his tolerance for infuriating performances has to be waning.

The Lions are the N.F.C. North version of the Falcons, just cloaked in Honolulu blue and without the Super Bowl calamity. The coach, Matt Patricia, took over a nine-win team after the 2017 season, and under his stewardship the Lions, 10-25-1 in his tenure, have gotten worse every year. They lost by 6 points to New Orleans on Sunday, which wouldn’t seem so terrible except that they led by 14 in the first quarter and then went on to trail by 14 at halftime. Do you know how mind-bendingly difficult that is to do? According to the Elias Sports Bureau, that’s happened only three other times in league history. The Lions tend to traffic in the absurd — they lost to Chicago in Week 1 after both blowing a 17-point fourth-quarter lead and dropping the potential game-winning touchdown in the end zone with six seconds left — and considering the sorry state of their defense, they’re unlikely to morph into situational masters anytime soon. And if they do, Patricia might not be around to witness it.

Another autumn tradition is unfurling in North Texas, just with a different coach: the Cowboys under Mike McCarthy are proving their whole is less than the sum of their parts. The Cowboys have (by far) the most talented roster in a gruesome N.F.C. East, as they often did under Jason Garrett, but despite a quarterback on pace to throw for roughly eleventy billion yards and the league’s best receiving corps, they are a successful watermelon kick away from being 0-4, having surrendered a league-high 146 points.

They miss their best linebacker, Leighton Vander Esch, who is injured. Another linebacker, Jaylon Smith, has struggled. Their secondary, weakened by the off-season departure of cornerback Byron Jones, has allowed 12 touchdown passes, second only to Atlanta. On Sunday, in a 49-38 loss to Cleveland, the Cowboys ceded their most rushing yards (307) in franchise history. That is a staggering statistic. So is this: Dak Prescott has thrown for 1,690 yards, and at this rate would surpass the single-season record of 5,477, set in 2013 by Peyton Manning, in Week 14.

Will it happen? Probably not. Can it? If the Cowboys’ defense continues to crater (and it very well will unless McCarthy and the defensive coordinator Mike Nolan can resolve the unit’s deficiencies), forcing Prescott to engage in Big 12-esque aerial displays merely to keep up, then sure, absolutely, chaos is fun.