Stefon Diggs’ departure from the Minnesota Vikings at the end of his tenure there was a bit messy and on Thursday he acknowledged part of it was on him.

The Buffalo Bills acquired Diggs from the Vikings in 2020 and he had a great year for the team with Josh Allen throwing the football to him. The wide receiver reportedly missed practices and meetings when he was on the outs in Minnesota, which later led to the trade. 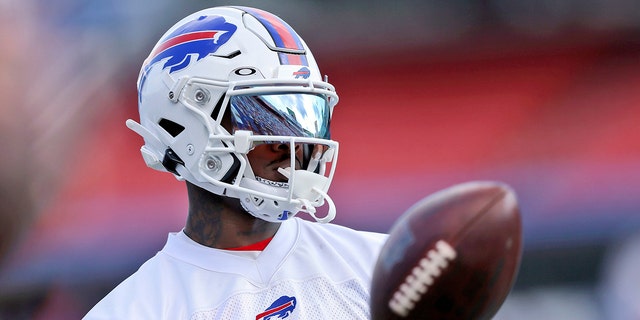 Buffalo Bills wide receiver Stefon Diggs tosses a ball during NFL football practice in Orchard Park, New York, on July 31, 2021. For all the individual feats Diggs accomplished in his first season in Buffalo, the receiver is most proud of the vote of confidence he earned from his teammates in being named a captain entering this year. (AP Photo/Joshua Bessex, File)
(AP Photo/Joshua Bessex, File)

On Tuesday, he opened up about his time with the Vikings.

“Coming from my old team – I hate talking about old stuff – but up to me wanting to leave and wanting to go to another place, I was a great teammate. It wasn’t until I wanted to do something else is when I became a bad teammate. So as far as when things aren’t going good, you know, it’s all good until it’s not good,” he told reporters, via Spectrum News Buffalo.

“So for me, even then, I always tried to play with a chip on my shoulder and lead my team the best way I know how. Coming here I had a fresh start. It was fair for people to make their assumptions or their assessments from the outside looking in. That’s fair. I just look at it as in, when I get there I’ll show them who I am and we’ll go from there. As far as my new chapter with my new team, things are going pretty good and trying to keep it that way.”

Diggs will enter the 2021 season as a captain for the Bills. And he’s earned it after his first season.

The Buffalo star was an All-Pro and Pro Bowler for the first time in 2020. He led the NFL in catches (127) and receiving yards (1,535). He added eight touchdowns. If the Bills get to the Super Bowl this season, Diggs will be a major part of the run.

Buffalo opens up the 2021 season at home against the Pittsburgh Steelers on Sunday.