Bob Gibson, Feared Flamethrower for the Cardinals, Dies at 84

Bob Gibson, the St. Louis Cardinals’ Hall of Fame right-hander who became one of baseball’s most dominating pitchers, winning 251 games in 17 seasons with an intimidating fastball and an attitude to match, died on Friday. He was 84.

His death was confirmed by Brian Bartow, a spokesman for the Cardinals. Gibson announced in July 2019 that he had pancreatic cancer.

Through the summers of the 1960s and early ’70s, Gibson proved a relentless force, and he was at his best in the World Series.

Gibson won both the National League’s Most Valuable Player Award and Cy Young Award, as its best pitcher, in 1968, when he won 22 games, struck out 268 batters, pitched 13 shutouts and posted an earned run average of 1.12. The following year, Major League Baseball lowered the pitchers’ mounds to give batters a break, but Gibson won 20 games and struck out 269.

He won at least 20 games five times and struck out 3,117 batters, relying on two kinds of fastballs, one breaking upward and other downward, and a slider that he threw at about three-quarters speed. He threw 56 career shutouts and captured a second Cy Young Award in 1970. He was an eight-time All-Star, won a Gold Glove award for fielding nine times and pitched a no-hitter against the Pittsburgh Pirates in 1971.

Pitching for three Cardinals pennant-winners, Gibson won seven World Series games in a row, losing in his first and last Series starts. His physique was not especially imposing — he was 6 feet 1 inch and 190 pounds or so — but he holds the records for most strikeouts in a World Series game, 17, and in a single World Series, 35, both against the Detroit Tigers in 1968.

He was voted into the Baseball Hall of Fame in 1981, his first year of eligibility. 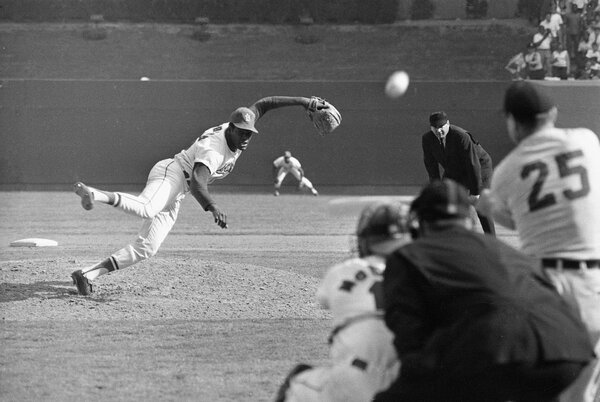 Gibson disdained conversations with opposing players, even at All-Star Games. He bristled at reporters’ questions he considered silly. And he was feared for his high, inside fastballs that set batters up for pitches on the outside corner.

“Bob wasn’t just unfriendly when he pitched,” Joe Torre, a Cardinals teammate who later hired Gibson as a coach when he managed the Mets, the Atlanta Braves and the Cardinals, told the sportswriter Roger Kahn in an article for The New York Times shortly before Gibson’s induction into the Hall. “I’d say it was more like hateful.”

“My thing was winning,” Gibson said in his autobiography, “Stranger to the Game,” written with Lonnie Wheeler and published in 1994. “I didn’t see how being pleasant or amiable had anything to do with winning, so I wasn’t pleasant on the mound and I wasn’t amiable off it.”

“For my money, the most intimidating, arrogant pitcher ever to kick up dirt on a mound is Bob Gibson,” Tim McCarver, the Cardinals’ catcher and a longtime broadcaster, recalled in his 1987 memoir, “Oh, Baby, I Love It!”

“If you ever saw Gibson work,” McCarver said, “you’d never forget his style: his cap pulled down low over his eyes, the ball gripped — almost mashed — behind his right hip, the eyes smoldering at each batter almost accusingly.”

Profiling Gibson for The New Yorker in September 1980, Roger Angell told how after his 17-strikeout game against Detroit, a reporter asked if Gibson had always been as competitive as he seemed that day.

“He said yes,” Angell wrote, “and he added that he had played several hundred games of tick-tack-toe against one of his young daughters and that she had yet to win a game from him. He said this with a little smile, but it seemed to me that he meant it: he couldn’t let himself lose to anyone. Then someone asked him if he had been surprised by what he had just done on the field, and Gibson said, ‘I’m never surprised by anything I do.’”

Pack Robert Gibson was born on Nov. 9, 1935, in Omaha, Neb., the youngest of seven children, and grew up in a housing project there. His father, Pack Gibson, died a few months before his birth and his mother, Victoria, worked in a laundry. His brother Josh, a graduate of Creighton University in Omaha, became his mentor and introduced him to recreational programs he oversaw. Bob Gibson became an all-city basketball player in high school and played several positions on an American Legion baseball team that won a city title.

His favorite sport was basketball, and he became the first Black athlete to play basketball and baseball at Creighton. He averaged more than 20 points a game for his collegiate basketball career and pitched, caught and played several other positions for the baseball team.

After graduating from Creighton, Gibson signed with the Cardinals’ minor league organization in 1957.

He pitched in the American Association and South Atlantic League that year, played basketball for the Harlem Globetrotters in the off-season, then focused solely on baseball. He made his debut with the Cardinals in 1959, then began to emerge as a leading pitcher two years later under the tutelage of Manager Johnny Keane, who had managed him in the minor leagues.

Gibson helped pitch the Cardinals to the National League pennant in 1964, when they surged past the collapsing Philadelphia Phillies, and he beat the Yankees in Game 7 of the World Series, pitching on two days’ rest. It was his second victory in the Series, and he was named M.V.P.

He missed two months of the 1967 regular season after a line drive off the bat of the Pirates’ Roberto Clemente broke his leg, but beat the “impossible dream” Boston Red Sox three times in the World Series, including a victory in Game 7, and won M.V.P. honors again.

In the 1968 World Series, Gibson twice outpitched the Tigers’ Denny McLain, a 31-game winner that year, but lost to Mickey Lolich in Game 7.

Gibson faced the racial segregation of the South, first as a minor leaguer in Columbus, Ga., and then with the Cardinals when their Black players were barred from the team’s spring training hotel in St. Petersburg, Fla.

When Gibson was in his prime on Cardinal teams that also featured Black stars like Lou Brock, Curt Flood and Orlando Cepeda, his reputation as an intimidating, if not surly presence, may have been influenced by racial issues.

“I pitched in a period of civil unrest, of black power and clenched fists and burning buildings and assassinations and riots in the street,” Gibson recalled in his memoir. “There was a country full of angry black people in those days, and by extension — and by my demeanor on the mound — I was perceived as one of them. There was some truth to that, but it had little, if anything, to do with the way I worked a batter. I didn’t see a hitter’s color. I saw his stance, his strike zone, his bat speed, his power and his weaknesses.”

Gibson tore cartilage in his knee in 1973, but in ’74 he became the second pitcher, after Walter Johnson, to strike out at least 3,000 batters in a career. Gibson retired after the 1975 season with a career record of 251-174 and an earned run average of 2.91. He hit 24 regular-season home runs, plus two in the World Series.