It was the end for Carl Frampton in Dubai late on Saturday night.

In round six of his last ever professional fight, Frampton was dropped, hurt, staggering, fighting back and then rescued from his own bravery by his corner and the referee.

Frampton was fighting Jamel Herring in the tiny ring, but the years of devotion, service, struggles and setbacks in the boxing game combined to make an enemy he simply could not resist. He became an old young man in a fight I thought he would win. It happens, boxing is cruel.

He was on his feet when his boxing career finished officially at 1:40 of the sixth of his bold attempt to win a world title at a third weight. The record books will show the raw statistics and not the bloody sacrifices, the triumphs so great they sound epic when retold and nights that nobody in our unforgiving game will ever forget. And, Frampton was a pleasure to be with in fight week. I can hear the roar of his crowd now, that breathless moment when a big Frampton fight was about to start. It was a journey, a lovely journey.

“I said I would retire if I lost and I will retire, I’m done,” Frampton said in the ring at a venue with absolutely no heart and soul, pitched somewhere in the anonymous neon sprawl of Dubai. “I have to go home now and be with my wife and kids and devote the rest of my life to them.”

Frampton is 34, this loss was his third in 31 fights in a business he discovered as a child in Belfast – it is a business that suckered him in, made him famous, gave him wealth and insisted in exchange that he make it the number one priority in his life. He agreed. It’s a brutal deal the best fighters have to make and most agree with a heavy heart. Frampton was always looking at ways to extend his family time, it’s been a conflict for a long time: Herring’s calculated performance gave the Belfast idol the perfect exit. He finished his decade of glory praising his opponent and declaring his eternal love for his wife and kids – it was a masterful, mindful and emotional way to go. It was, in short, class.

The boxing game is packed with after-timing geniuses, but it was painfully clear from about one-minute of the first round that the old, smart, sharp and elusive Frampton was not in the Dubai ring. His legs looked heavy, his hands looked slow.

Herring had the reach and height advantage and never surrendered a single inch of the six or seven inches that he had; Herring moved, picked his shots with precision and growing power. The power was the real threat and not one that many were happy to consider when this fight was first made in December 2019. Herring was considered a big, awkward southpaw, a man with far fewer natural skills than Frampton; the one-time marine, scarred by what he witnessed as teenager on two tours of Iraq, was better than imagined. In his last fight, a messy defence of his WBO super-featherweight title, he was called a coward. Herring just kept smiling, he knew what he was capable of. And, Herring, by the way, is one of boxing’s truly nice guys. 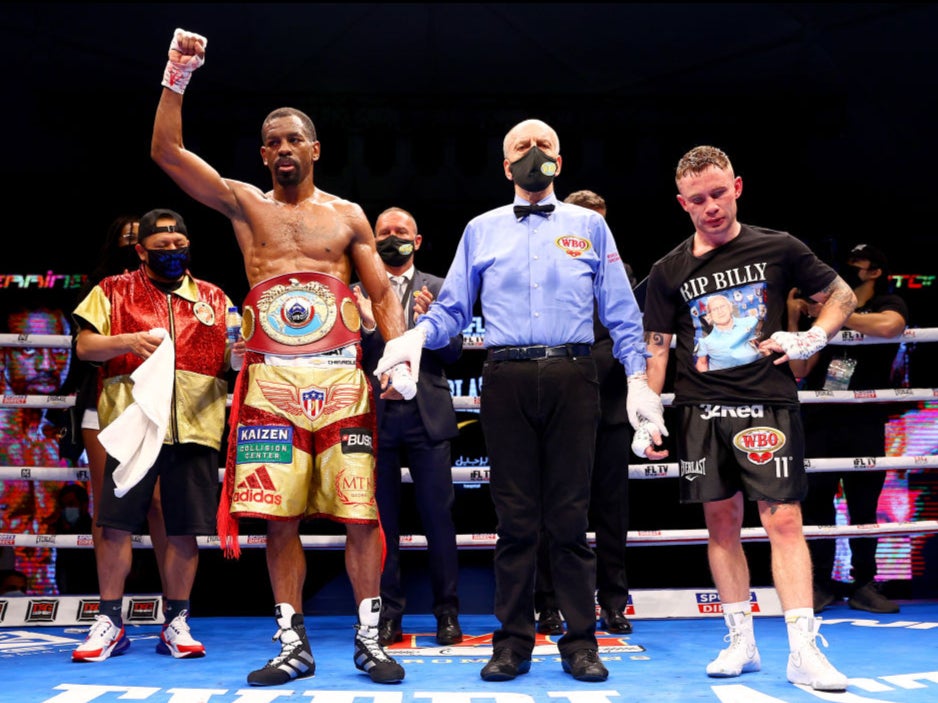 In Dubai, the last venue for a nomadic fight, Frampton tried one thing, tried another and Herring just popped away with a simple jab, but it was a jab with jarring power. The first three rounds went that way, Frampton was short in every area. He forced the pace in the fourth and nicked it, but Herring remained composed, even when a cut on his right eyelid needed some emergency work at the end of the fourth.

Frampton was also marked under the right eye, his eyes sparkling as he came out for the fifth: a perfect left cross counter dropped Frampton. He was not hurt, not badly damaged, but he was shaken enough to back away. Herring had him, that’s the savage truth. In a million homes the shouting probably stopped as Frampton went back to Jamie Moore and Nigel Travis in his corner. Frampton’s fans knew what the corner knew: the end was written. It was a cold moment, it always is when a boxer and his people know a fight is lost before the final punches confirm it. It’s possible Carl had known from the start.

The American knew it as he came out for the sixth, his feet just a fraction closer, his punches just a bit more damaging. I feared for Frampton then. In the Channel Five studio with me was Josh Taylor, the world light-welterweight champion and an old, old friend of Frampton. “Herring’s looking to finish it,” he said, it was close to a whisper. Ten seconds later, Herring connected with a sickening left uppercut and Frampton went down heavily. He beat the count, Taylor could barely watch. The referee hovered close, Herring let his heavy fists go, they traded, Frampton tried, was caught and caught, staggered and then the towel was launched. Frampton had no complaints: His last fight was over.

Frampton stood one final time as a boxer in that temporary ring, in that tinsel town of promises and deceit and had a look of total shock and despair on his face. He will return forever to his family and boxing will have lost one of the finest fighters of the last ten or so years. He won world titles at two weights, led the chorus of approval and affection from fans he adored and was adored by.

There will be debates on his greatest night, the greatest win, moment, punch, celebration and people will debate long into the dark, dark night. There are so many memories, but perhaps the heartbreaking moment on Saturday night, his last words in defeat when he fought back the tears and declared his love and devotion for his wife and children will always be the moment that Frampton’s fans agree on. That took some guts. Carl, thanks for so many memories.