BOSTON — At the start of the week, Brad Stevens, the coach of the Boston Celtics, mentioned how his players needed to “accomplish some difficult things.”

It was a novel way of looking at a potential reset for his team, just before the N.B.A. All-Star break this weekend. Of course, when it comes to muddling through this bizarre, pandemic-stricken season, the Celtics have had plenty of company. Few teams have excelled. But the Celtics were among a select group that showed up for the delayed start of the league calendar in late December with championship aspirations, and they have been among another select few that have — so far, at least — underachieved.

Fresh opportunities to accomplish some of those difficult things continue to present themselves, though, and the Celtics are beginning to put the pieces together. On Tuesday night, with a 117-112 victory over the visiting Los Angeles Clippers, the Celtics managed to do something that they had not done since the middle of January: win a third straight game.

“They’ve stayed together when they easily could have been pulled apart by the noise,” Stevens said, “and I think you have to be able to resist that when you’re at this level and you’re going through the roller coaster of the season.”

The Celtics, who are 18-17, are hoping to build on their newfound momentum. Not so long ago — last week, to be specific — fans were getting noticeably grouchy about the team’s lack of ball movement, about Jayson Tatum’s seeming insistence on creating scoring opportunities for himself off the dribble (“hero ball,” in the parlance of social media), and about a general absence of game-to-game cohesion.

Some of those problems can be explained away. Kemba Walker, the Celtics’ starting point guard, missed the first 11 games of the season while recovering from knee surgery, and he has been sitting out the second game of back-to-backs. (The Celtics are 1-4 in those games.) Tatum missed five games in January after he tested positive for the coronavirus, and he has acknowledged feeling winded at times since his return. Marcus Smart, the team’s do-everything, defense-minded wing, has been sidelined since he tore a calf muscle on Jan. 30.

Add it all up, and the Celtics have started 13 players through 35 games, a comprehensive list that includes Tremont Waters and Carsen Edwards. (Last season, which was also — what’s the word? — disjointed, Boston started a total of 14 players.) On Sunday, when the Celtics wound up stealing a win against the Washington Wizards, Javonte Green, a 27-year-old guard who spent the first few years of his professional career hopscotching among leagues in Spain, Italy and Germany, started in place of Jaylen Brown, who missed the game with knee soreness.

Nothing about their patchwork roster makes the Celtics unique. Entering Wednesday, seven teams in the Eastern Conference were within three games of .500, including the Miami Heat, who have scuffled along since reaching the N.B.A. finals last season, and the Knicks, whose fans are celebrating their relative resurgence as if it were 1973 all over again. The point being: Not all mediocre records are the same.

Consider, too, the Wizards, who are suddenly one of the most dangerous 13-20 teams around. Led by Bradley Beal, an All-Star starter and the league’s leading scorer, they had won seven of their last eight games before losing to the Celtics, having found a bit of rhythm after a nearly two-week pause in their season that was caused by a coronavirus outbreak. Nothing about this season is ordinary, and no team is immune from its challenges.

“It’s good to get a win on a day that ends in a ‘Y’ right now,” Stevens said after the Celtics’ win over the Indiana Pacers on Friday night, which ended a three-game losing streak. “That’s all I can say.”

Against the Wizards on Sunday, the Celtics engineered some late-game magic after trailing by as many as 5 in the final minute. Tatum made three straight layups, and Beal’s 19-footer at the buzzer was off target after Tatum had helped double-team him in the corner.

In a way, Stevens said, the comeback felt to him like some good karma after “the lucky stuff” that had befallen his team in Dallas week, when the Mavericks’ Luka Doncic made two 3-pointers in the final 15.8 seconds to lift his team to a 110-107 win — an especially traumatic result for the Celtics after they had erased a 12-point deficit late in the fourth quarter.

On Tuesday, optimism came in the form of more evidence of Walker’s improving play. He finished with 25 points and 6 assists. And the ball moved: Six players scored at least 13 points.

“We’ve been playing tough, not letting little things affect us throughout the course of the game,” Walker said. “We’ve been encouraging each other, picking each other up.”

As far as these things go, perhaps the win came with an asterisk since the Clippers were without Kawhi Leonard, who left the court during warm-ups after experiencing back spasms. But every game this season seems to come with some sort of asterisk: someone injured, someone limited, someone absent because of contact tracing. The oddities are endless. Stevens said he was just glad that his players had a chance to sleep in their own beds this week, a sunbeam of normalcy. 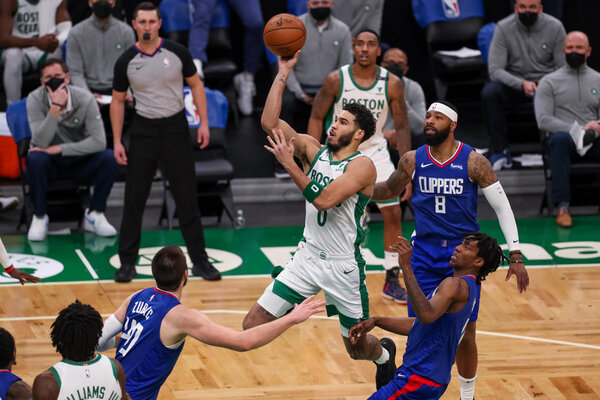 The Celtics, in accordance with local regulations, have announced that they will welcome fans back to their home games starting on March 29, with capacity at their arena limited to 12 percent. Stevens has noticed the contrast when his team plays in front of modest crowds on the road.

“It is eerily quiet in here versus other places we play,” he said. “So it is a little bit of an adjustment.”

In a way, fans were spared an up-close look at the Celtics’ struggles in recent weeks. They could be arriving at the right time.