Charli Collier of Texas Honors Her Father’s Memory With Resilience

Charli Collier has spent her last season in college basketball adjusting to a new coach, to a coronavirus-safe form of training, to disrupted classes and to conferring with her teammates over video calls. All the while, she coped with the expectation that she would become the top pick in the next W.N.B.A. draft.

“We had the pandemic, had the whole canceling of the term, and then — boom — coaching change, and that just really shook my whole world,” Collier, a 6-foot-5 junior center for Texas, said in a phone interview on Thursday. Her sixth-seeded team will face Maryland, a No. 2 seed, in a round-of-16 N.C.A.A tournament game on Sunday.

At one point this season, Collier said, she thought about leaving school. But she stuck around, knowing she had adapted to much more difficult situations before.

Not so much on the court, of course. When Collier first picked up a ball at age 5, it clicked, she said. She started facing off against her younger brother, Casey, and her father, Elliott, on their front-yard court in the suburbs of Houston, then joined a league through her local Y.M.C.A.

Her father was her biggest supporter and favorite playing rival, Collier, 21, said, but the family lost him to cancer five years ago.

“He used to tell me, ‘Nobody can stop you but yourself, Charli,’ and I remember and think about that on game days,” she said.

“He was the center of our family,” Ponda Collier, Charli’s mother, said Friday in a phone interview from her home in a Houston suburb.

Collier is eligible for the W.N.B.A. draft as a junior because she will turn 22 in September.

Collier and Retha Swindell — the first African-American woman to play basketball at Texas and the school’s career leading rebounder — are the only two Longhorns to have averaged a double-double for two seasons.

Collier was always athletic, her mother said. To release her bountiful energy, her parents put her in gymnastics as a toddler.

“It was playtime, it was fun, but she tried to be the best at whatever she was trying to do, like her flips, she just kept going, ‘I have to get this right, this round-off, what does a round-off look like?’” Ponda Collier said.

Eventually, though, Charli grew too tall for gymnastics and switched to the sport both of her parents had played in college — her mother at Southwestern University and her father at Eastern Montana College.

When Charli’s recruiting letters started piling up, Elliott Collier would handle them, talking to coaches across the country, Ponda Collier said, as both parents tried to preserve her childhood for as long as they could.

When his daughter was a sophomore in high school, Elliott Collier learned he had lung and liver cancer. Charli said she had to start preparing then for a life without him.

“It took a toll on them,” Ponda Collier said of her two children. “But I really feel like their strength came from the way he was. He was being so strong through all of it, and they kept trying to make him happy, so he’d have some good news.”

A few weeks before he died, Elliott Collier read Charli her invitation to try out for the under-17 Women’s National Team from his hospital bed, and he was radiating with pride and envisioning her as a No. 1 draft pick in the W.N.B.A., Ponda Collier said. He died on April 4, 2016, at age 53.

“After that happened, I think both of us dug deeper into our fields,” Casey Collier, a freshman football player at the University of Southern California, said in a phone interview on Friday.

At 16, Charli earned a spot on the national team; her mother and brother drove with her for the tryout in Colorado just a few weeks after her father’s funeral, Ponda Collier recalled, and the team went on to win a bronze medal at the 2016 world championships. 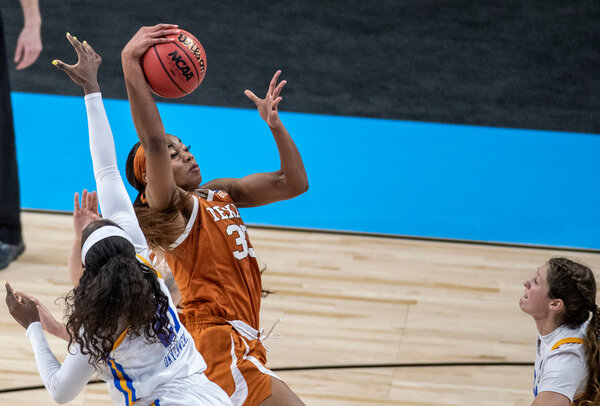 Ponda Collier started picking up the recruiting letters, shuttling both children to their various practices while also working as a schoolteacher.

Seeing her mother’s efforts, Charli Collier said, propelled her to dig deeper, and as a junior she led her high school team to a 34-5 record and to the Texas Class 5A state semifinals.

When it was time for Charli to choose a college, she decided to stay in Texas to be close to her mother and brother. She had also developed a strong relationship with Karen Aston, who recruited her and was the Longhorns’ coach for Collier’s first two seasons.

While adjusting to changes and complications this season, Collier said, she remembered what her father had told her: She is the only person who can stop herself from excelling.

“I’m playing in my last tournament for my college career, I’m about to go pro — it’s not a normal situation, not everybody is going through what I’m going through,” she said. “And I think that’s what my dad meant, is that I’m a Collier and I’m going to be held to a higher standard.”

Before games, Collier said, she listens to hip-hop music, prays and drinks beet juice, centering herself and tuning out noise. And thinking of what her father taught her.

As her mother waves to her from the stands, she said, she knows her father is there in spirit Her brother, to whom she dedicated her next game during an interview on Thursday, has said he will be tuning in from football spring training.

Collier had a great game in the first round against Bradley with 23 points and 15 rebounds. Against U.C.L.A., she was swarmed defensively and played just 26 minutes, ending up with only 5 points and 5 rebounds.

She expects to improve on that substantially and play at her peak on Sunday.