Thanks for signing up to the
Sport email

The swelling on Darren Till’s spirit was permeating even through the viscous layer of sweat coating his slouching frame. As Colin Heron embraced Till, then 25, in his fellow Scouser’s locker room in the American Airlines Center in Dallas, the coach might as well have been embracing the 17-year-old who had nervously shuffled through the doors of Heron’s Kaobon Gym in Liverpool. That first meeting was some eight years behind the pair, and that room was some 4,500 miles away, but in this moment Till was a vulnerable version of the frightening striker who had blitzed his way to a welterweight title shot in just five UFC fights.

Tyron Woodley, holding the gold and without a defeat in three years, had proven too much for Till on this September night in 2018, submitting the Briton in Round 2 to retain the title and hand Till a first defeat in professional mixed martial arts.

“Immediately after, it was nothing but tears and – from his behalf – the feeling that he’d let everyone down,” Heron, 51, tells The Independent. “That was his initial response. He broke down mid-interview backstage, then it was just me and him after that. What can you say? Just, ‘It’s the start of your journey, son, your time’s gonna come. Nothing’s changed.’

“It was the most perfect camp you could imagine. He must have broken three people’s noses in sparring, shattered someone’s orbital – not intentionally, but he didn’t miss a single counter shot. Everything was the best I’ve ever seen from him.

“If he needed to lose the fight, then so be it, but at least do himself justice.” 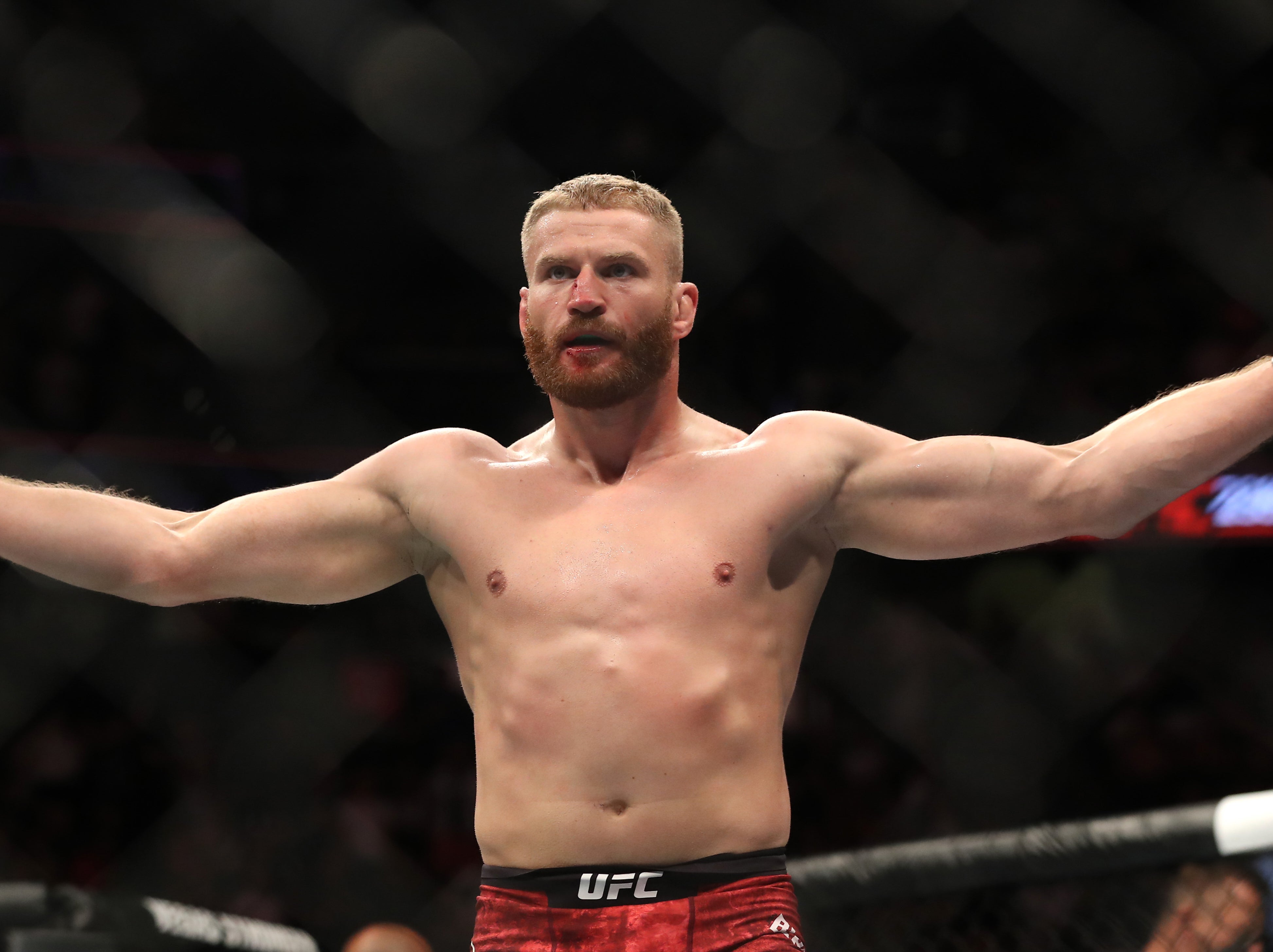 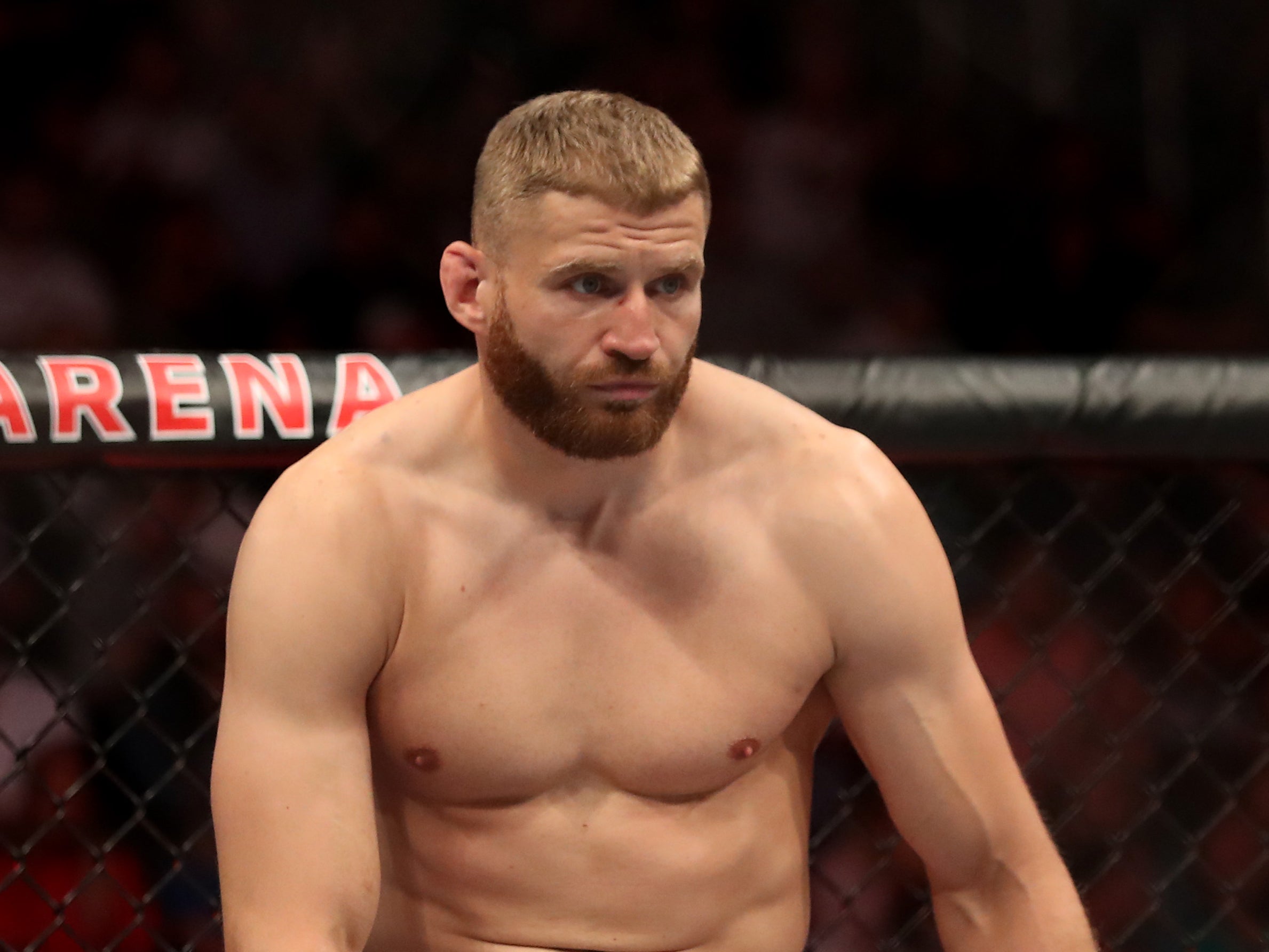 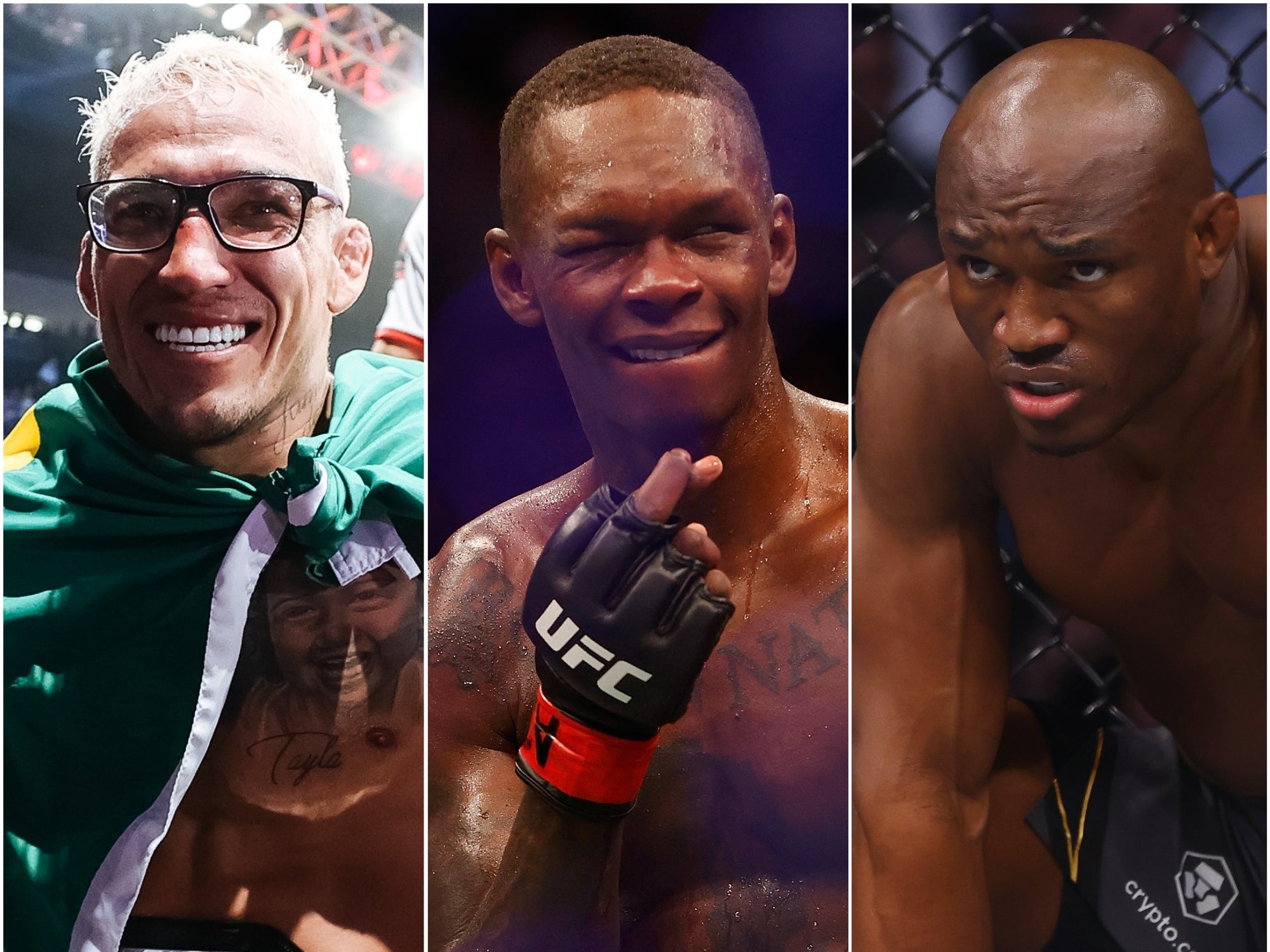 If Heron’s instinct was to be tender in the fallout of Till’s defeat by Woodley, it was an instinct honed over more than three decades of coaching. But that is not to say Till is always on the end of such warm wisdom from Heron, who also insists that his is not a one-size-fits-all method of training.

“I’m pretty good at reading people, their energies, how to deal with them,” he says. “Darren Till doesn’t need what Tom Aspinall does. Some people need the hand on the shoulder and half-cuddle approach, some people need tough love, some people need a good old-fashioned b******ing, especially people like Mr Till.”

Heron’s combination of people skills and technical acumen have seen the Liverpudlian coach Muay Thai champions in every weight class, as well as pro boxers ahead of world title fights. Heron himself first began training in martial arts aged six, taking in kickboxing, judo and boxing before starting in Muay Thai, in which he quickly became a national champion and got his first coaching experience at just 14.

“Because of my skillset, I pretty much had the respect instantly, because I’d trained alongside these guys since 11 and probably beat half the men up in sparring by 12,” Heron says matter-of-factly. “But there’s got to be something there for them to want to sit up and pay attention to a kid, basically. It was a learning process for me, but I took to it pretty quick… It seemed to be something I was made to do. It seemed to be my calling.

“My ethos became: If you come to me, my job as a coach is to help you achieve your ultimate goal in life, to help you be the best version of yourself. My ambition is as big as yours, whether you want to just improve your way of living or be a UFC champion.”

Heron is yet to craft a UFC champion, though it seems an inevitability. Having first dealt with the UFC 17 years ago while training Terry Etim, Heron’s likeliest UFC title holder seemed for some time to be Till, who faces South Africa’s Dricus Du Plessis at UFC 282 this Saturday, exactly two weeks before turning 30. Till, Heron insists, is still “world class” and capable of winning a UFC title, though focus among British fans has shifted towards Wigan heavyweight Tom Aspinall – another pupil of Heron – in recent months. Till and Aspinall, both 29, are like surrogate sons to Heron.

“Darren was a very dangerous kid as a Muay Thai fighter,” Heron recalls. “He’d been knocking men out from the age of 14, all around the world. I think he realised very quickly that the structure of the life [that my gym provided] suited him. He knew straight away he had someone who was gonna be there for him. I’d say, ‘Son, I heard you done this last night…’ My fighters know they can ring me at 2am or 3am if they’re really in trouble.

“Once we make that bond, you become like family. I feel like a brother or father. Same with Tom, he was probably 12 when he walked into my gym – didn’t know how to throw a punch or hold his hands. Tom’s dad works alongside me [as a jiu-jitsu coach], and he always used to say: ‘God forbid anything happened to me, I’d want you to bring my kids up.’ That’s the ultimate thing any father could say to you.”

Aspinall, seen by many as a freak of nature due to his unique speed at heavyweight, is in fact a freak of nurture. 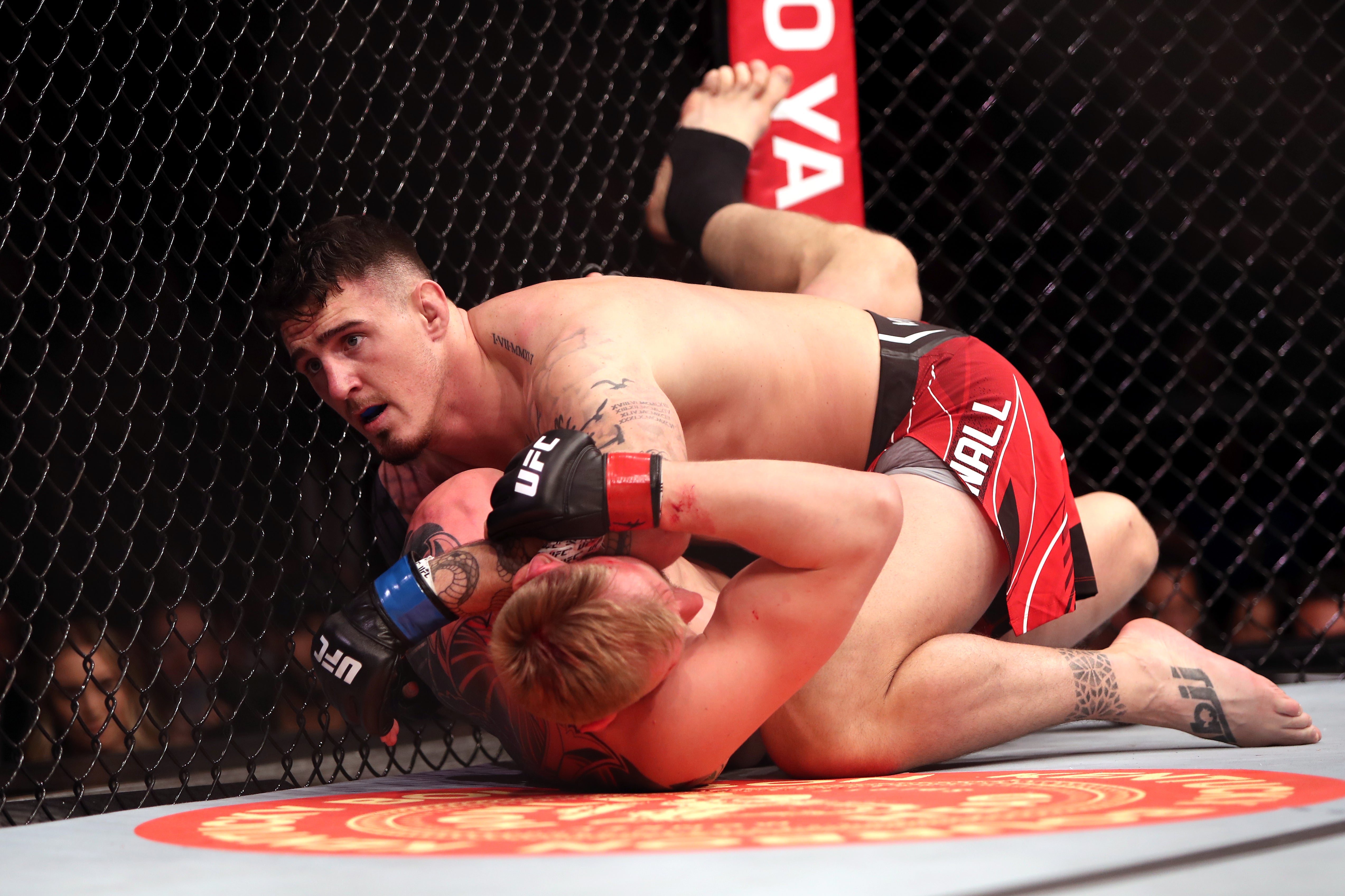 “I was fortunate to have him from a very young age,” Heron says. “I do a lot of subliminal coaching, I’m a big believer in programming. From them early days, I decided: ‘What do I want in the ultimate heavyweight? A concussive puncher who plods around with a very low work rate? Or do I want to create this thing that’s super mobile and super fast?’ I trained him as a lightweight, but knowing he was going to be a heavyweight.”

To explain subliminal coaching, Heron refers to Aspinall’s training camp ahead of his first-round submission of veteran Alexander Volkov in London in March. The performance was a startling clinic in striking, wrestling and jiu-jitsu – all condensed into fewer than four minutes at the O2 Arena.

“Rather than stopping mid-session and saying, ‘I want you to do this when he does that,’ I’ll use physical cues without them realising,” Heron says. “Right the way through the Volkov camp, we had sparring partners pushing forward and towards Tom’s right shoulder, round Volkov’s left hip – because Volkov’s best weapons are probably his front kick, back hand and right leg kick. So, straight away in the fight, you see Tom pushing Volkov back and moving to his left. So, Volkov couldn’t land without over-moving his hips to compensate. That was also how Tom was able to take him down; Volkov has to over-turn his hips to commit to his right hand, which gives him no basis to stop the takedown.

“Don’t get me wrong; we’ll say, ‘Tom, this is what he’s good at,’ but I don’t want to say, ‘The gameplan is this,’ because if you miss something, you think your gameplan has failed.”

On Saturday at UFC 282, it will be Till employing the effects of the subliminal coaching that Heron has provided for the best part of 15 years.

“My proudest moment with Darren has just been watching him grow and mature as a person, accept responsibilities, raise his kids,” Heron says, after some thinking. “The titles are gonna come anyway, so that’ll be another thing to add to it, but for now… it makes me pretty proud to see him go from being a kind of troubled, violent kid to… well, he’s never gonna be chilled, he’s f***ing mental, but a bit of a role model to others. 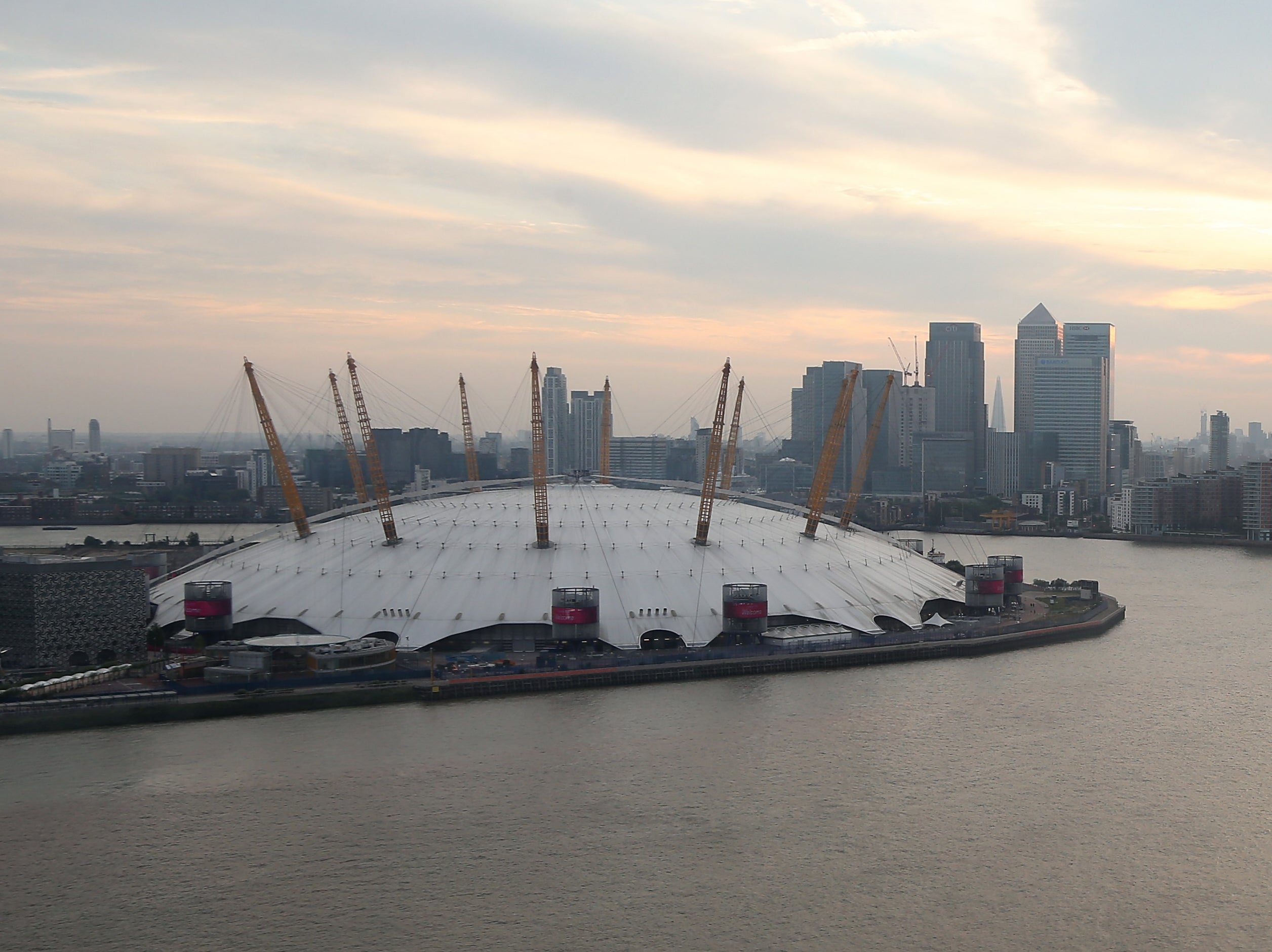 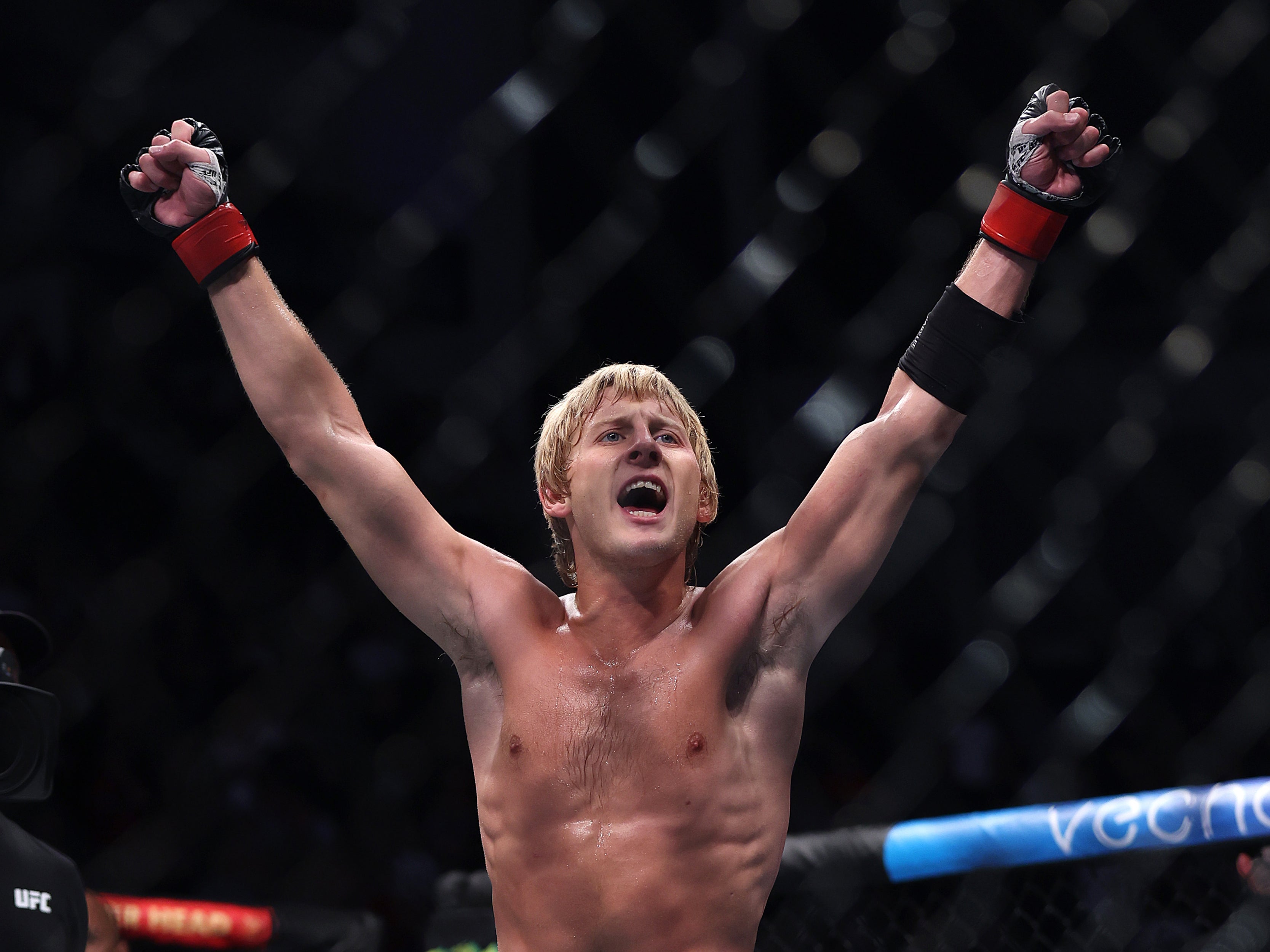 “He’s a complex little character, is Mr Till, with many layers.”