Home » Sport » Conor McGregor was ‘probably’ skeptical about competing when the UFC said it would hold events through COVID, Dana White said

Conor McGregor was ‘probably’ skeptical about competing when the UFC said it would hold events through COVID, Dana White said 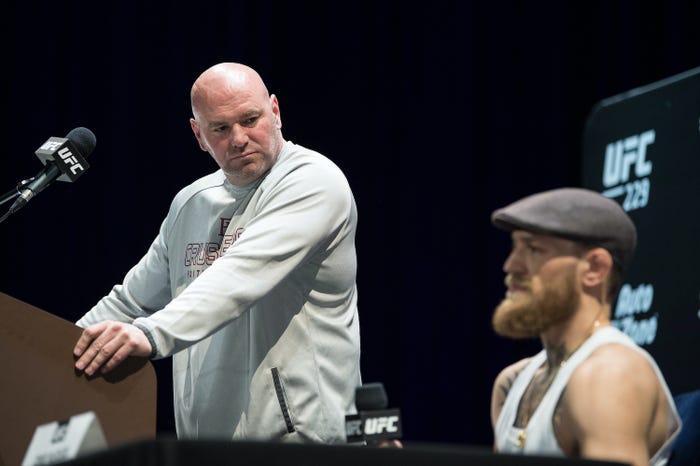 Conor McGregor was "probably" skeptical about competing when the UFC said it would hold events through the coronavirus pandemic, Dana White told BT Sport on Wednesday.

The Irishman's lightweight bout with Dustin Poirier will likely serve as a finale to a two-week and three-event stay in the Middle East, as the UFC uses a sanitized hub on Yas Island — built in conjunction with the Abu Dhabi Department of Culture and Tourism — to host international events safely.

Before 2020, McGregor had ambitions of fighting three times. He called it a McGregor season and wanted his 40-second victory over Donald Cerrone at the start of the year to mark a period of fierce combat activity.

However, he abruptly retired before the summer, citing boredom, tiredness, and a lack of excitement at options the UFC was presenting to him.

"He was frustrated with things that were beyond our control, and it gets to the point where you [just think], 'I'm not going to deal with this aggravation right now, I'm not going to let this drive me crazy when the world is shutting down and other things are going on,'" White said.

"Again, that's my opinion. Ask Conor, and he'd probably have a different answer. I don't know, but that's what I'm thinking."

White added: "It definitely sucks not having Conor fight with fans, but that wasn't the reason [his] fights didn't happen. It just didn't work out.

"I think Conor originally … when it first happened, Conor was like, 'I don't know about fighting without fans,' and then he saw how the fights were going.

"There's always these things which happen in the sport. And everybody likes to sit and watch, see how this plays out.

"I think when I said I was going to go through COVID, a lot of people were skeptical and wanted to see how this thing played out. And Conor was probably one of them."

White expects the Poirier bout to be a slobberknocker

McGregor and Poirier fought once before — a featherweight match in which McGregor won by first-round knockout at UFC 178 in 2014.

Both combatants have grown physically and technically in the six years since then, and White is envisioning "a completely different fight" next month.

"Obviously Conor McGregor is a much different fighter than when he was when he first faced him, and Poirier is a much better fighter, too," he said.

"I don't know how that plays out now in the fight, but it's definitely interesting.

"You can't look at the first fight, and go, 'Oh this is exactly the way it's going to go again.' Because it won't. And it's in a different weight class.

"Conor looks damn good and Poirier is always in shape. I expect this to be a good fight."