ONE footballing fairytale in a lifetime is incredible enough – but a second really is stretching the point.

Then again, maybe we should have expected it of a team which hails from the land of Hans Christian Andersen. 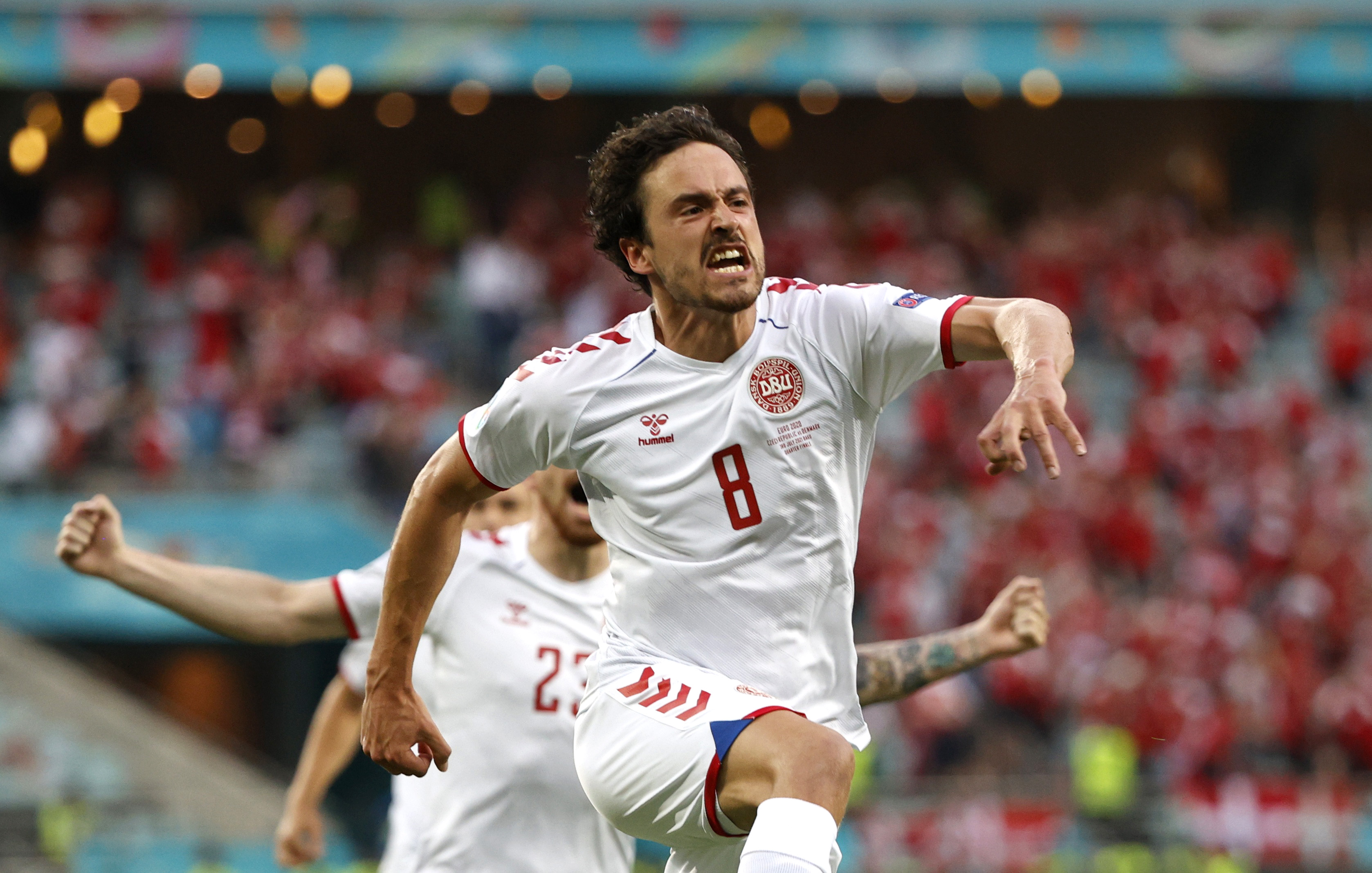 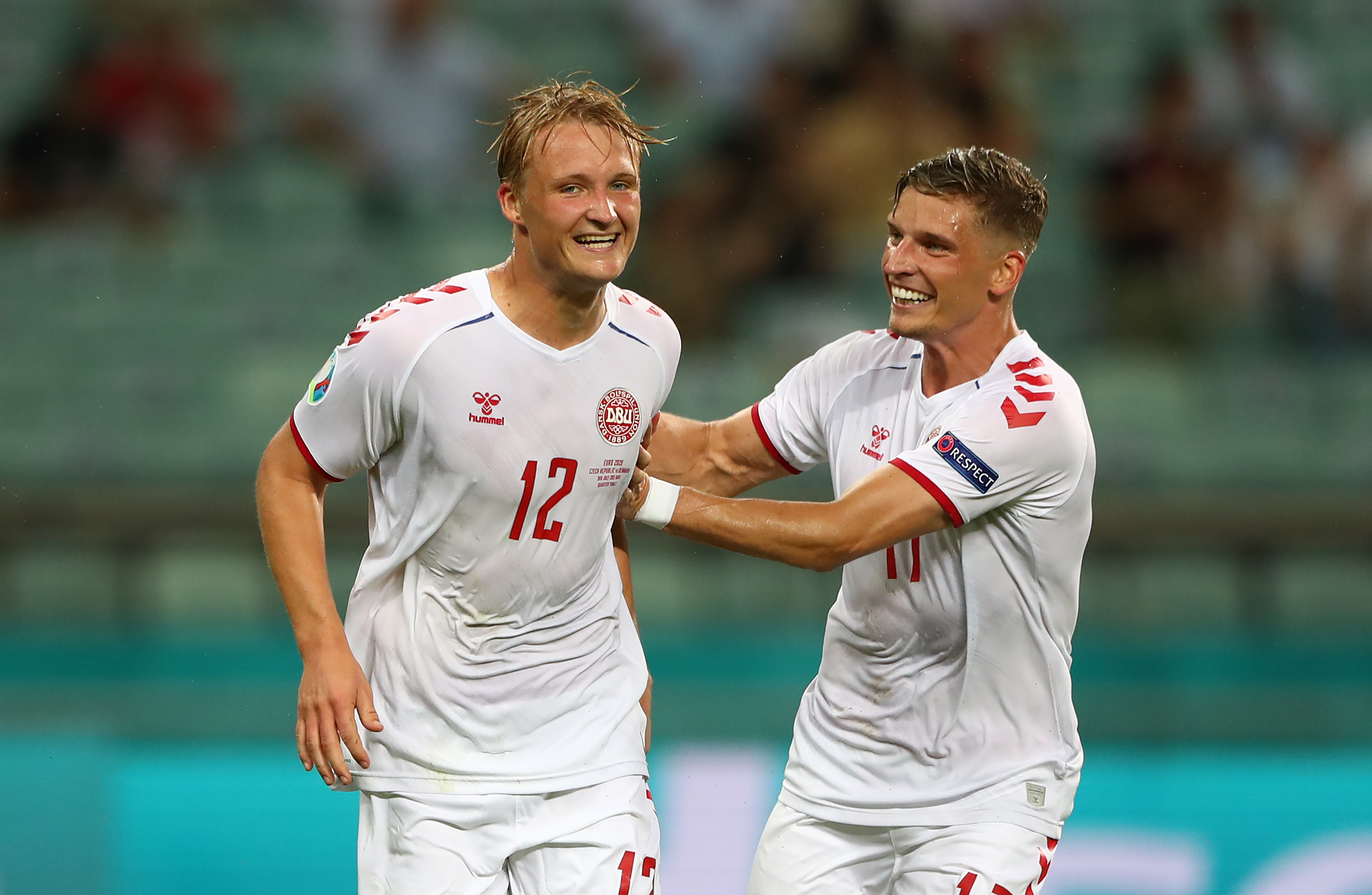 In 1992, of course, Denmark got a late invite to the party when Yugoslavia was thrown out…and ended up as the unlikeliest Euro winners in history.

Well now the 2021 heroes stand on the brink of a sensational rewrite, as Thomas Delaney and Kasper Dolberg sent them scooting into a Wembley semi-final on Wednesday.

And even old Hans himself would be pinching himself at this story, from a side which lost its opening two games in Group B and were all but down and out.

But that’s exactly what has happened. A nation swept along on the wave of emotion after the horror of Christian Eriksen’s collapse in their opener, is two games from glory.

And if Delaney and Dolberg were the goalscoring heroes of last night’s quarter-final victory over the Czechs in baking Baku, every single member of this Danish squad has played a part.

It has been a journey that has captured the hearts of fans way beyond Copenhagen, yet don’t think this team has been carried along purely on sentiment.

There are some damn fine players in there as well. Last night every single man in white, marshalled – as ever – superbly at the back by skipper Simon Kjaer.

Stunning, solid, scrapping…and full of the sort of spirit which eventually just proved too strong a nut for the Czechs to crack. 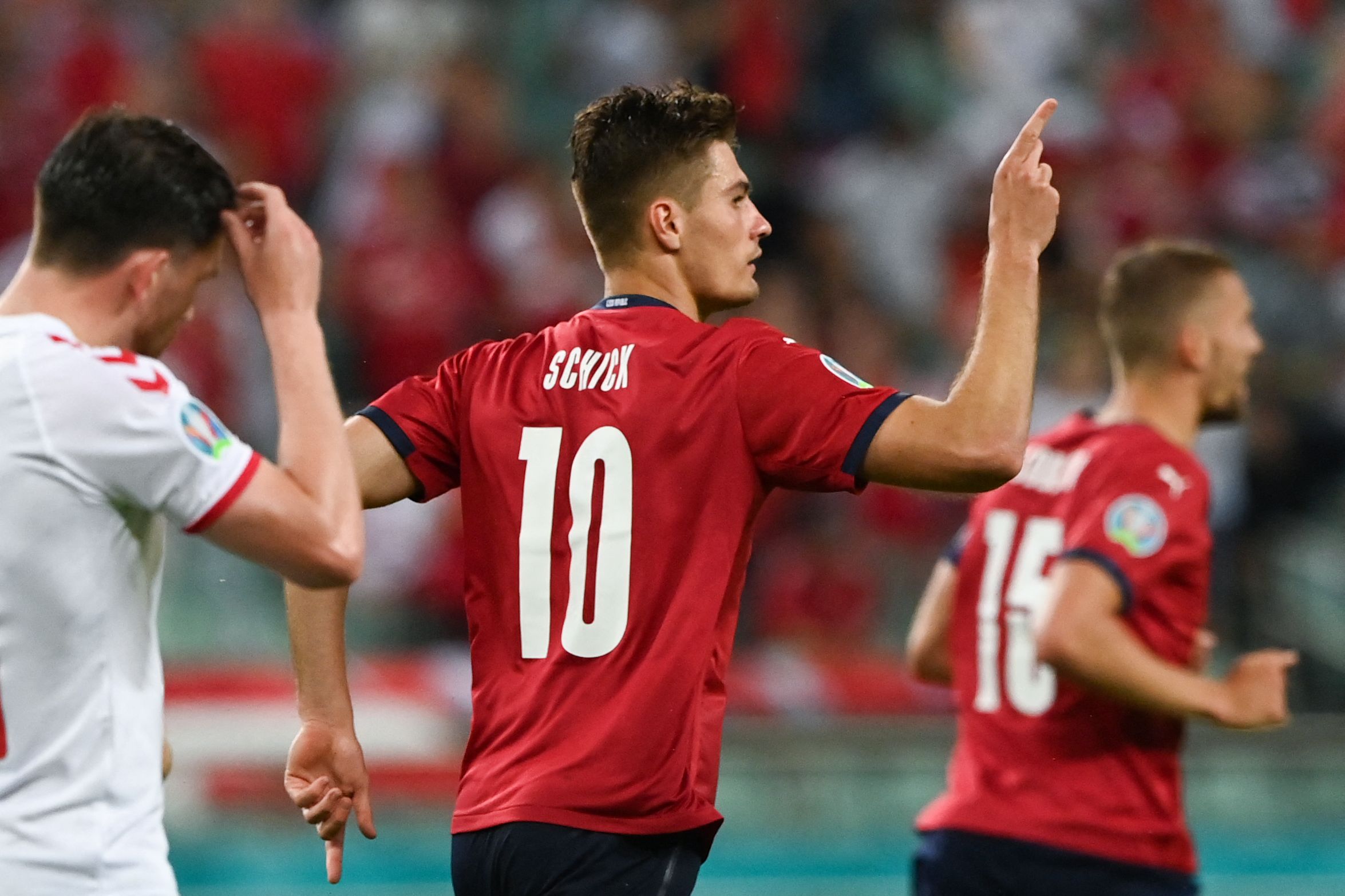 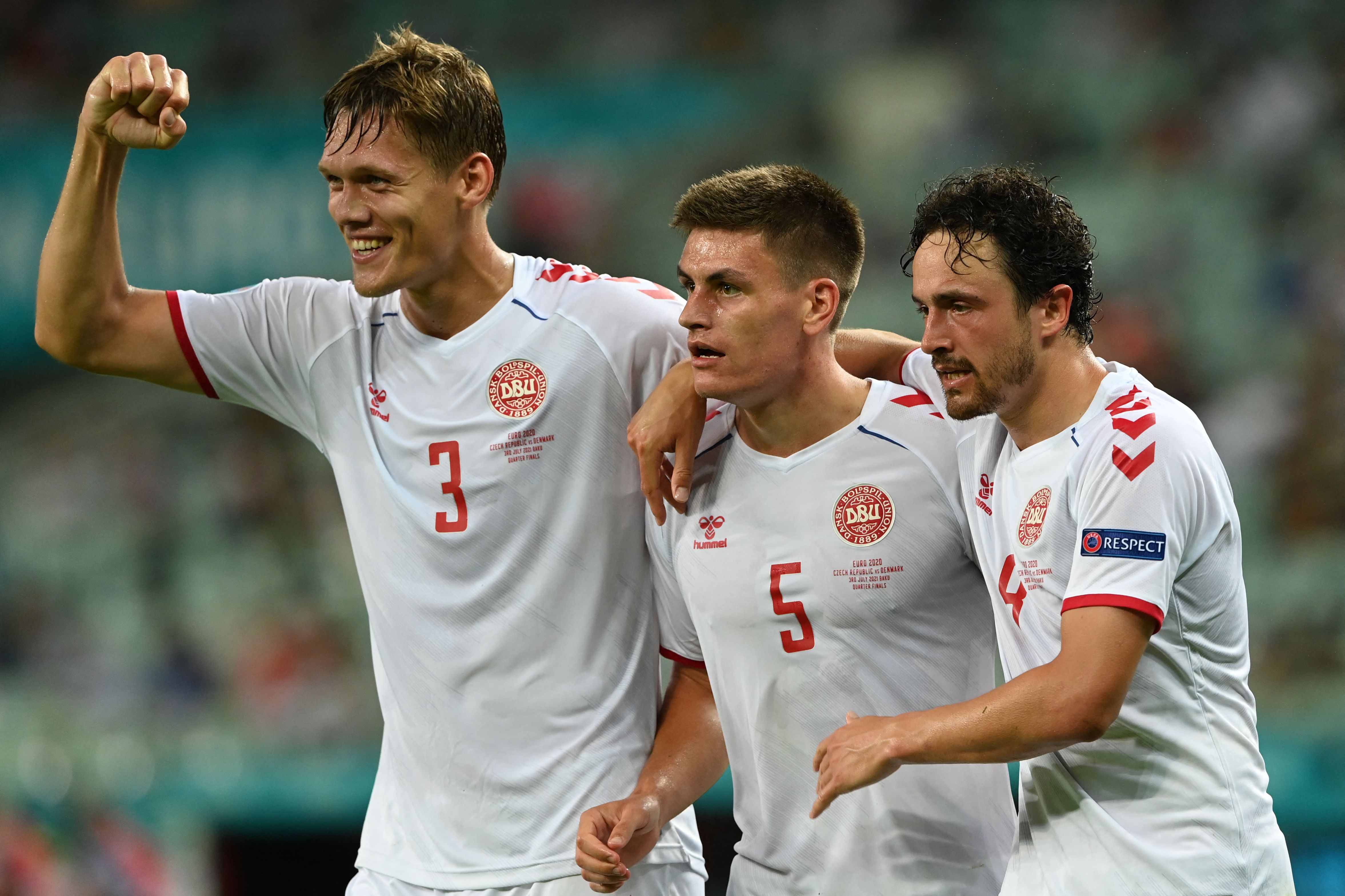 They needed every ounce of it, too, after going two up and then fighting a rearguard battle for the bulk of the second half.

All that after going ahead inside five minutes, too, albeit not without a healthy hint of controversy attached.

Dolberg clearly got the final touch in a tussle with Ondrej Calustka, yet referee Bjorn Kuipers ruled that it came off the Czech left back instead. It was a crucial clanger.

Jens Stryger Larsen swung over the perfect corner, Kjaer did a perfect blocking job on Patrik Schick and Delaney planted an unmarked header in the corner.

Not the first Del boy to get away with bouncing a Czech! And what a moment for the man who has lost his place at Borussia Dortmund to a certain Jude Bellingham.

The Danes went close to a second when Mikkel Damsgaard chased down a Pierre Emile Hojbjerg’s punt, but couldn’t get enough on the ball as it hung up. 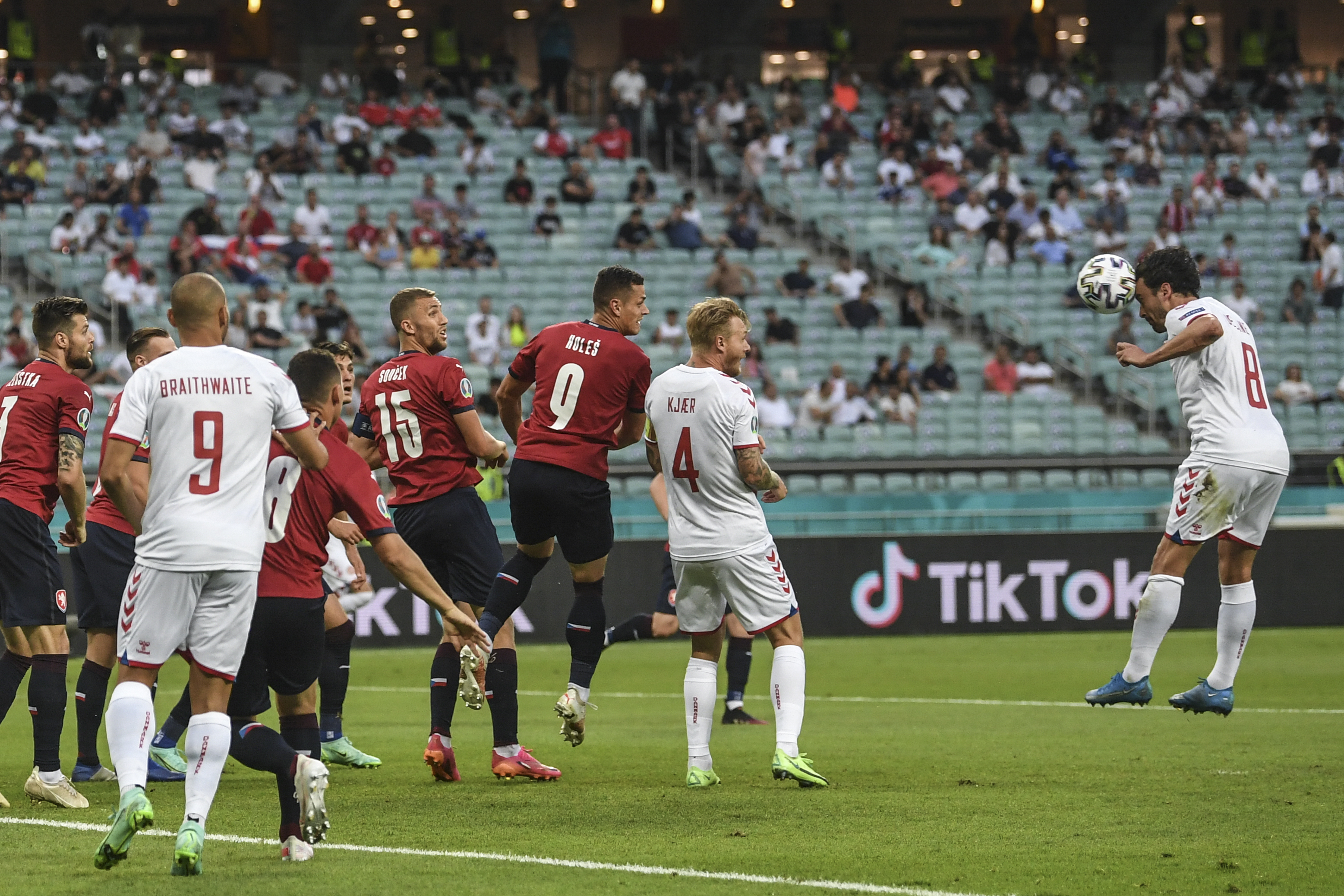 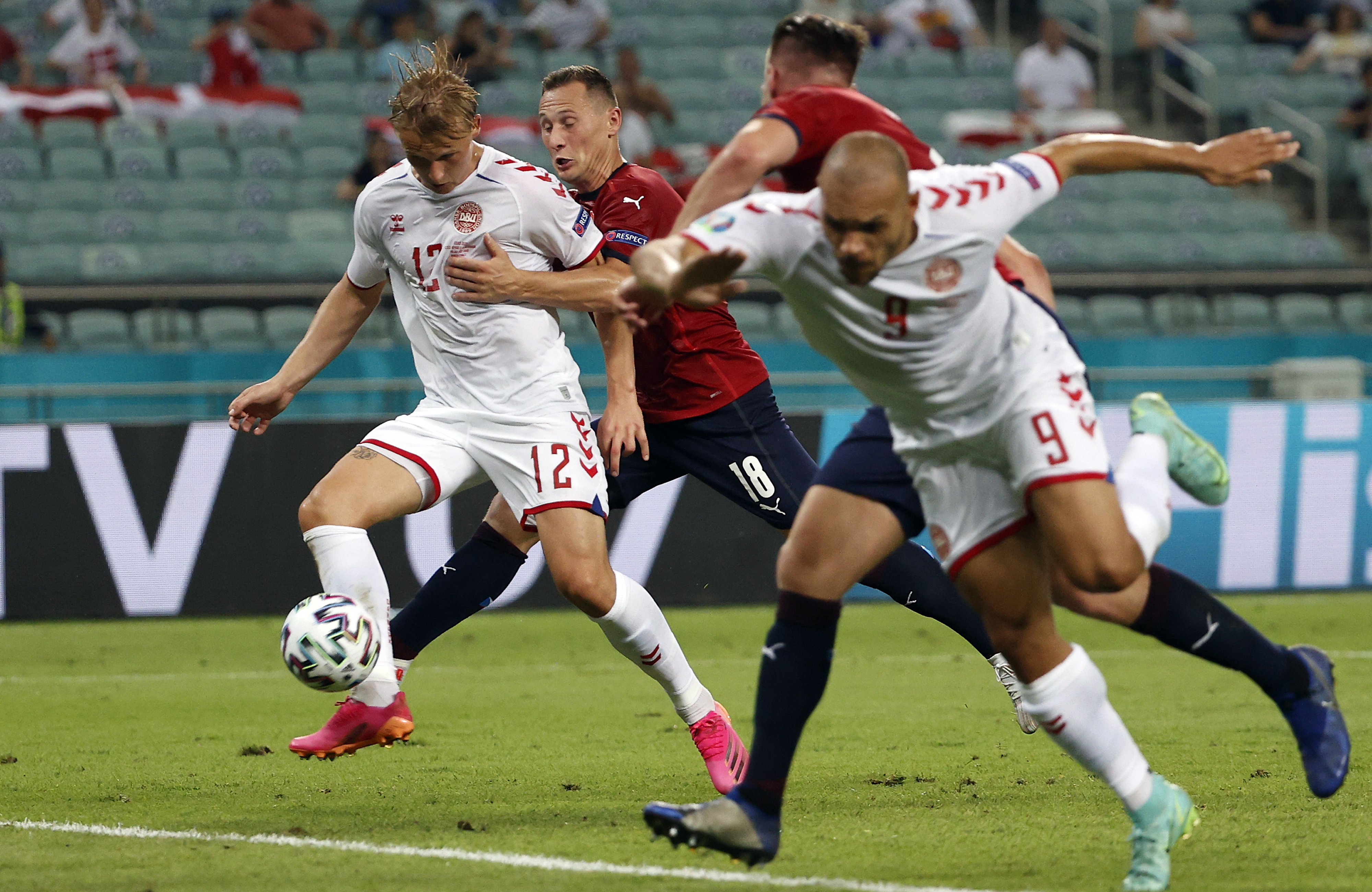 Then Delaney shanked a chance of a double, and if a second goal was coming from anywhere, it was the Danes…and with one devastating 42nd minute counter thrust, it did.

It was laid on Premier League foundations, too, Chelsea’s Andreas Christensen and Southampton’s Vestergaard playing pivotal roles in sending Joakim Maehle down the left.

But they were only cameos to the peach of an outside-of-the-boot cross that curled beyond the stooping Braithwaite and the stretching Tomas Kalas – but certainly not Dolberg.

And the man whose double helped KO Wales in the last 16 buried his side-footed volley into the roof of the net.

Game over? Not a bit of it…not when a Danish defence suddenly, inexplicably, began safe distancing in their own box and the Czechs seized the day.

Half time sub Michael Srmencik had Schmeichel paddling to beat away one long-ranger within 60 seconds of the restart. 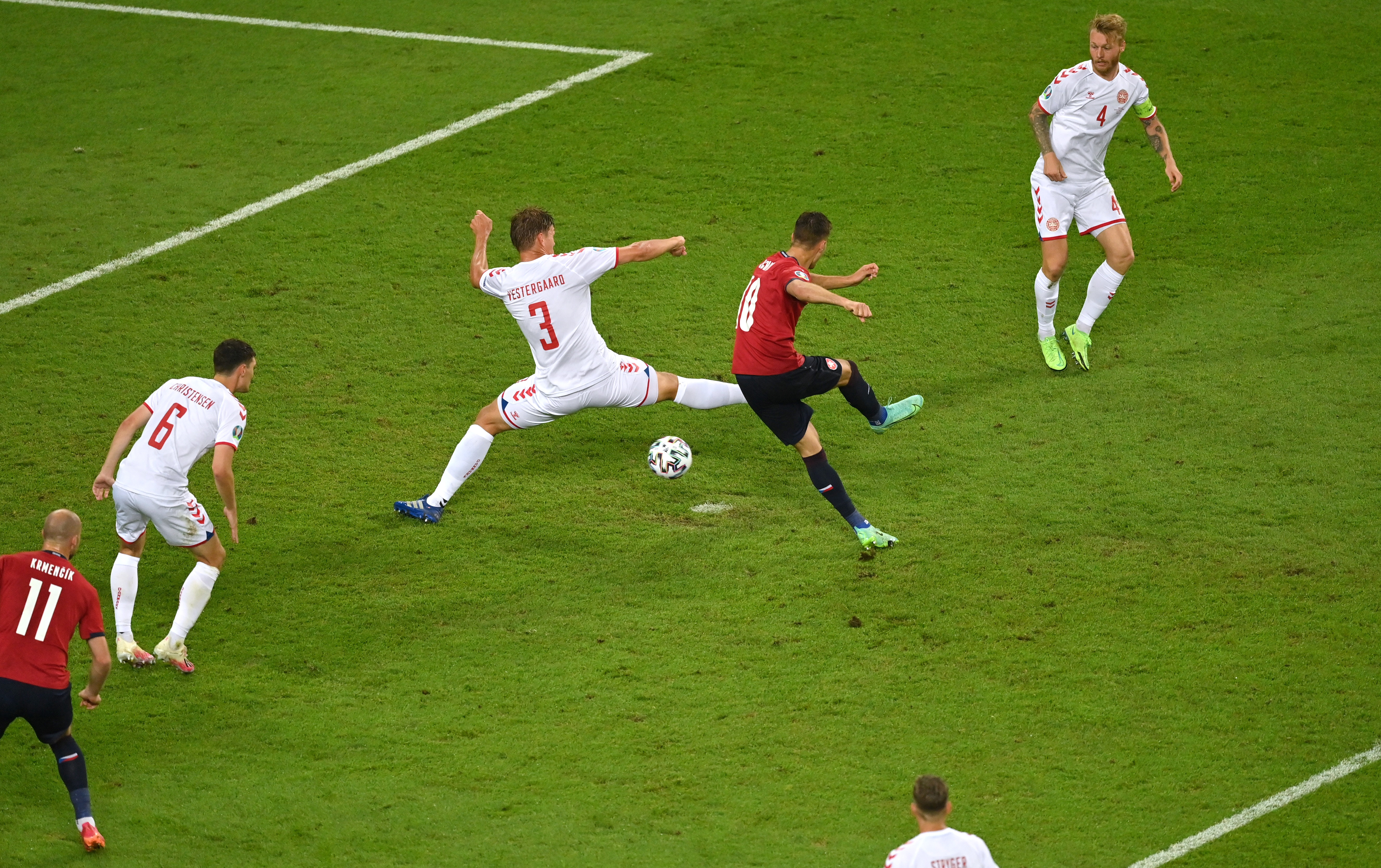 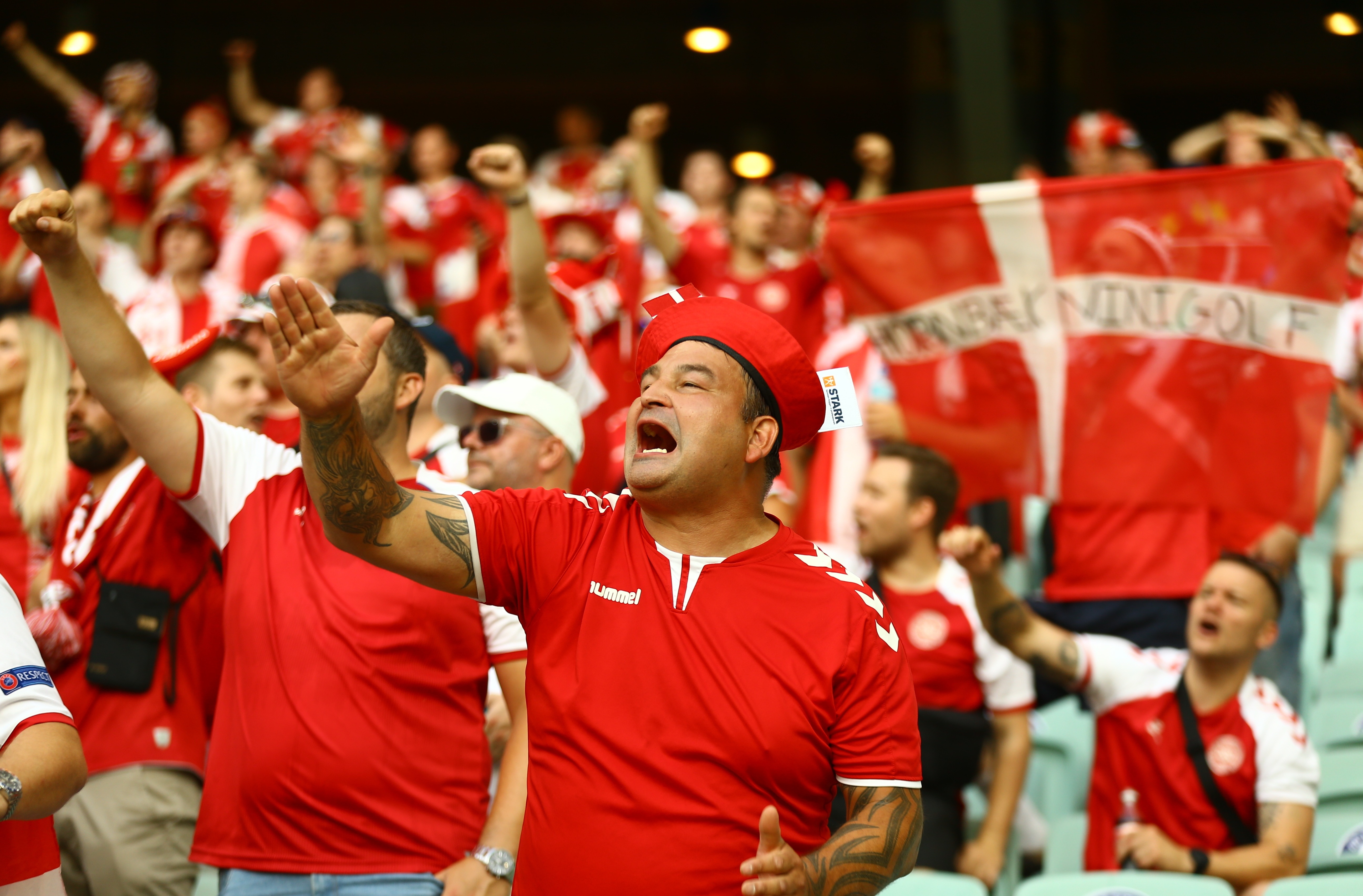 And after two minutes more they had a lifeline from a man who is threatening to finish the Euros as the tournament’s deadliest marksmen, after arriving as one of its unknowns.

For when Vladimir Coufal crossed from the right, Vestergaard stood too far off Patrick Schick and he hooked a leg round to volley in.

It was his fifth goal of the Euros – joining Cristiano Ronaldo at the top of the scoring charts – but more crucially booted open a door which seemed shut and bolted.

From easy street to backs-to-the-wall with one swing of a foot. And boy, the Danes didn’t half ride their luck at times, too, as the Czechs peppered their box.

Never more than when captain Kjaer, an immense figure at the back once more, jabbed out a foot to block Jakub Jankto’s drive and held his breath as it pinged inches from his own net.

In fairness, it was one of the few times Kjaer wasn’t foot perfect all night. Leaders don’t come much more impressive than Denmark’s.

How he and his team-mates will relish the chance to prove that at Wembley this week.