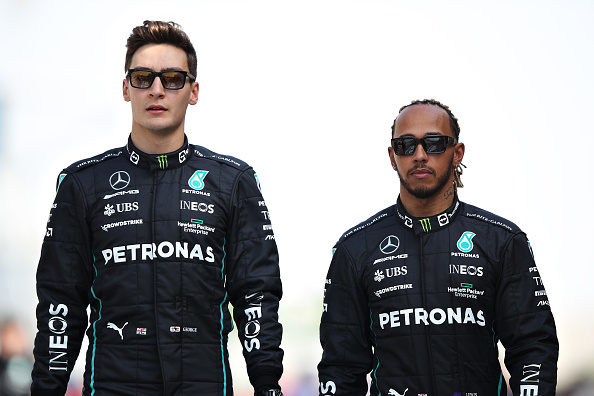 The 2022 F1 season starts this Sunday, in Bahrain, with all scores reset to zero.

Maybe, but first of all Hamilton needs to beat a young new team-mate. After three seasons of experience with Williams, George Russell is now in what one expects will be a championship-challenging Mercedes.

Damon Hill knows what it is like to be the fresh face in a title-winning team, and to compete alongside a far more experienced team-mate. He did so at Williams in the 1990s with Alain Prost, Ayrton Senna and Nigel Mansell. Does the 1996 world champion have some advice for 24-year-old Russell (below)?

He’s going to need to be faster than he’s ever been before,’ says Hill. ‘But he’s not new to F1 and he’s not completely new to the team, so he’s not totally out of his comfort zone.’

The embers of controversy around the race director’s decision-making at the 2021 season finale remain, despite the FIA’s decision to recast the role and review safety car procedures.

Hill says regardless of the outcome, the way Abu Dhabi was handled was regrettable. Nevertheless, he would have kept Michael Masi in the job.

‘I thought they should have backed Michael,’ he adds. ‘It was clear last year that pressure was being applied tactically on the race director [by both Mercedes and Red Bull].

‘Given the ambition to have the race finish as a race rather than behind the safety car, maybe he could have been excused for cracking under pressure.’

That race was watched on TV by 109million people globally. New fans have been tuning in, particularly in the USA, and Netflix’s Drive to Survive series has ramped up the storytelling.

Might the desire to put on a show have added to the pressure? ‘The entertainment value was given precedence over what was right and fair,’ agrees Hill. ‘It was happening throughout the year, and I don’t blame one person. Everyone wanted to spice up the show.

‘F1 had had a long run of Mercedes winning everything and wanted another challenger.

‘Everyone agreed we want racing to be entertaining, and I’m 100 per cent fine with that. But the sport can’t just pander to adrenaline.’

Hamilton was miles up the road and on course to win the 2021 title until an accident triggered the safety car, allowing Verstappen to pit for fresh tyres and pass Lewis on the last lap. Verstappen’s name has been engraved on the trophy but will history question the legitimacy of his title?

‘As much as it was a thrilling climax to the season, and it was brilliant from many angles, I think everything was diminished a little bit,’ says Hill. ‘The sport was diminished. Max’s championship was diminished, slightly.

‘There’s no question we’d have liked it to end differently, and I don’t [just] mean for Lewis to win.’

Hill lost out to Michael Schumacher at the final race of 1994 by a single point when the German drove into him. Did Abu Dhabi have some parallels with that? ‘For me, Monza [last year] was the Adelaide ’94 moment,’ he replies.

‘It put everyone on notice [that Verstappen might take his rival out].

‘Masi was looking into how [the FIA] could penalise a result that was achieved by a collision, and that played into Hamilton’s driving in the final race. The damage was done in Monza, and I think Lewis would have won [the title] had they not come together there.’

While Hill does not want racing to be compromised by showbusiness, he is happy it is attracting a new audience.

‘Netflix has been phenomenal,’ he says. ‘The children of my friends previously never asked me about Formula One, and now they’re coming up to me saying “tell me about Charles Leclerc”.

‘It has changed the terrain. Toto Wolff and Christian Horner have tried to provide fodder for the show.

‘I thought it got unseemly at times. I hope it wasn’t meant. They were being really quite abusive, [and] Toto says he regrets letting it get to that point.’

Will the all-new cars, an emboldened Verstappen and a hungry team-mate sharing his garage make 2022 even tougher for Hamilton to win a record-breaking eighth title?

‘George is going to want to take a few scalps and the new regulations may throw up some surprises,’ says Hill.

‘But Lewis has total faith in Mercedes to do whatever it takes to provide him with the car he needs to win again.

‘He relishes a challenge — that seems to mean most to him. Not winning last year has relieved him of a burden in a way. Rather than having it on a plate with the best car, I think Lewis would prefer to get it fighting everybody.’