Home » Sport » Derrick Henry and the Art of the Stiff Arm

Derrick Henry and the Art of the Stiff Arm

In an era of instant highlight videos on social media, an otherwise forgettable 4-yard run went viral. Derrick Henry, the bruising tailback of the Tennessee Titans, was its star: He lured a 200-pound cornerback in close, grabbed a hold of his shoulder, and simply shoved him to the ground. The whole video clip, from start to finish, took only a few seconds.

The fact that the run was negated by offsetting penalties could not have mattered less. King Henry had humiliated Josh Norman, a former All-Pro, adding him to a collection of famous defenders he had destroyed with the most antique of football moves: the stiff arm.

“You use whatever weapons are at your disposal,” said Bobby Ramsay, who in his time as the coach at Yulee High School in Florida helped Henry perfect the stiff arm, which was then put to use as Henry set a national high school record of 12,124 yards rushing. “For some guys, it’s the juke, for other guys, it’s a spin move. Derrick’s is the ability to use his free hand to keep guys away.”

Norman’s demise is just one of a growing list of highlights for Henry during the last three seasons. From a 99-yard run in 2018, to the dominant playoff performances that took Tennessee to the A.F.C. championship game last season, to his 264-yard performance in a Week 6 win over Houston, Henry has made regular use of a move so old-fashioned that it is immortalized on the Heisman Trophy — which Henry won for Alabama in 2015.

The scary thing is, Henry doesn’t just have one stiff-arm technique. He has three. 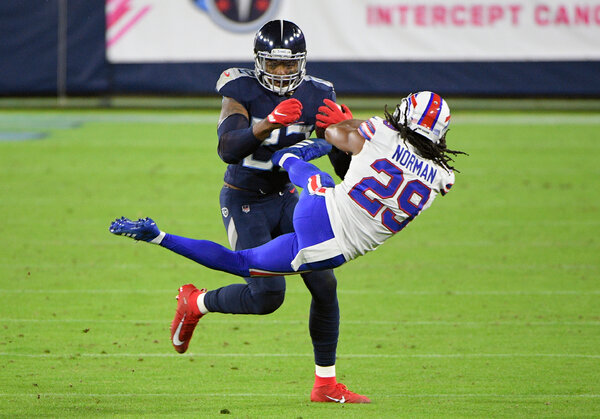 Ramsay, who now coaches at Mandarin High School in Jacksonville, described one of Henry’s stiff arms as a “social distancing” move, where Henry leaves his long arms stretched out in advance of contact, keeping defenders away. Another is the “it’s time to go to bed, son” move where a defender makes the mistake of going for Henry’s waist, only to have Henry push down on the defender’s helmet, like a father patting his son’s head.

For the Norman play, Henry employed what Ramsay called the “barroom get the heck away from me” move. It’s a version of the stiff arm reserved for when a defender is already in proximity, and it is not nearly as easy as Henry makes it look.

Ryan Tannehill, the Titans’ quarterback, saw the play unfold from only a few yards away, which prompted him to use some salty language on the field. He marveled at Henry’s strength even after his team’s 42-16 win over Buffalo.

“That was probably one of the meanest stiff arms I’ve ever seen,” he said. “No doubt.”

Henry tossed aside the attention as easily as he dispatched Norman.

“I’ve been doing too many curls,” he said with a smile. “I’ve gotta lay off the arms.”

Jokes aside, the stiff arm, which dates to football’s earliest days, has endured, with Jim Brown giving way to Walter Payton and so many others. Players like Garrison Hearst and Marshawn Lynch have bowled their way onto stiff-arm highlight videos that chew up clicks on YouTube.

While Henry’s bruising style is not particularly fashionable in today’s N.F.L., the stiff arm can be almost a cheat code for players who perfect it. The league’s rules allow for a runner to push a defender’s helmet without being called for a face-mask penalty, provided the contact is deemed incidental.

The most famous example of the move is probably Ed Smith’s pose on the trophy that bears John Heisman’s name, but few stiff arms in the N.F.L. can match the stakes, and the payoff, of the one thrown by John Riggins in the Super Bowl that followed the 1982 season.

With his Redskins behind by 17-13 in the fourth quarter, Riggins, on 4th-and-1, broke around the left side and used his right arm to shed Dolphins cornerback Don McNeal. He then charged 43 yards into the end zone for the go-ahead touchdown.

Riggins said he did not practice the stiff arm or develop any special techniques for it. “Basically, everything I did was instinctual,” he said in a telephone interview. “If someone was trying to grab you, you try to fend them off.”

On his famous Super Bowl run, Riggins credits his teammates and a bit of luck. Before the snap, tight end Clint Didier went in motion to the right, then headed back to the left to block for Riggins. McNeal followed Didier in both directions but slipped when he reversed course.

“That’s what kept him a hundredth of a second away from getting a bigger piece of me,” Riggins said. “It would have been shame on me if I didn’t break that tackle.”

Whether it’s Riggins or Henry, a good stiff arm can make a player stand out in any era. But with teams working so hard to emphasize the passing game, and with smaller more versatile running backs in fashion, Henry, who embraces his size rather than trying to adapt to the style of smaller runners, has become the ultimate throwback. Standing 6 feet 3 inches and weighing 247 pounds, he is the largest starting running back in the N.F.L. Ezekiel Elliott of the Dallas Cowboys, who also entered the league in 2016, is three inches shorter and 20 pounds lighter. The Kansas City Chiefs rookie Clyde Edwards-Helaire is listed at just 5 feet 7 inches and weighs 207 pounds.

In addition to his unusual height, Henry has long arms. Measured at 33 inches before the N.F.L. draft in 2016, he has a longer reach than all but three draft-eligible running backs measured in the last five seasons.

That size was not always seen as an advantage. Ramsay said many recruiters dismissed Henry’s obvious talents in high school because they felt he was too big, or “ran tall” in football parlance. They were all looking for running backs with a lower center of gravity.

But Henry is extremely fast for his size — he ran 4.54 in the 40-yard dash — and uses his height and strength to break tackles and get into the defensive backfield. He averaged 5.1 yards a carry last year, when he ran for a league-leading 1,540 yards and 16 touchdowns. This year, he is averaging 4.8 yards a carry, but is also carrying the ball more — 24.6 times a game, up from 20.2 times a game last season.

Henry can effectively stiff-arm an opponent with either arm — yet another thing that sets him apart — and any opponent who decides to go after his legs won’t find that much easier.

“You hear people say, ‘defenders should just go low,’” said Dave Anderson, a former N.F.L. wide receiver and the chief executive of BreakAway Data, an athlete development company. “The problem is defenders can’t really do that when they are running full speed on an angle, in the running back’s vision and are outweighed by 50 pounds. All of those really mess with a defender’s timing.”

Anderson equated attempting to time a tackle on a player of Henry’s size and speed to “trying to jump in a car going 20 miles per hour.”

None of this is new for Henry, who has used his height, weight and leverage to great effect since at least the ninth grade. Ramsay recognized that Henry, who was over six feet tall in high school, was not a slashing runner like Barry Sanders. Because of his height advantage, lowering his shoulder into a shorter defender’s chest would have slowed him down. So Ramsay let Henry break tackles with his bulk and use his speed to run away from pursuers.

“I’ve been doing it since I was a kid, since I’ve been playing football, and it just came natural to me because I have long arms,” Henry said in September. “So that’s the first thing I use to break a tackle or get away from the defender.”

In the game in which he set the national high school rushing record, Henry carried the ball 58 times for 482 yards and 6 touchdowns. That performance was typical of a senior year in which he scored 55 touchdowns, even as some defenses put as many as 10 players on the line of scrimmage. “There wasn’t any secret what we were trying to do,” Ramsay said.

There still isn’t. While Tannehill has shown an ability to stretch the field with the passing game, Tennessee runs its offense through Henry. And no matter how much teams try to adjust, Henry seems to find ways to make it work. Henry will have that dominance tested on Sunday, when his 5-0 Titans face the 5-0 Pittsburgh Steelers, a team that features the most efficient run defense in the N.F.L. But if there is a player who can make things work against just about any defense, it’s Henry.

And as his star continues to rise, Henry can count among his admirers someone who happens to be an icon of the Titans franchise from its days as the Houston Oilers, and who thinks Henry doesn’t use the stiff arm nearly enough.

“How in the hell you don’t use that stiff-arm more?” Earl Campbell asked Henry during a visit with the team last year. “Put that bone on them. Let them know you got it.”