With the Eli Manning era in Giants football apparently ending on Tuesday, fans might want to recall just how fortunate they were that Manning ever wore the team’s uniform.

The exit of a fading hero is always sport’s version of tragedy, and there was, fittingly, a considerable amount of melancholy enveloping Giants-land on Tuesday.

But Manning’s story is also laced with a healthy dose of kismet. That should be remembered now as well.

Manning turned out to have everything he needed to become the ideal quarterback for New York’s most stately franchise after he arrived in 2004 — from the quirky, quizzical look that came over his face in times of duress on the field to his unswerving resilience when battered physically to his clever ability to avoid the celebrity maelstrom in the country’s biggest market.

The Giants’ draft-day trade for Manning that year was the result of deft, intricate maneuvering and bold conviction. Afterward, it took years of patience with a young, struggling Manning to reap the fruits of the Giants’ faith in him. Manning’s performances in two Super Bowl victories are now his established legacy — Hall of Fame credentials — but they were hardly predestined.

As the rookie quarterback Daniel Jones gets his chance to supplant Manning and rewrite Giants history — which is the right decision for all, including Manning — that is a lesson worth remembering. Jones is not likely to have immediate success, either, especially without an assortment of accomplished wide receivers. 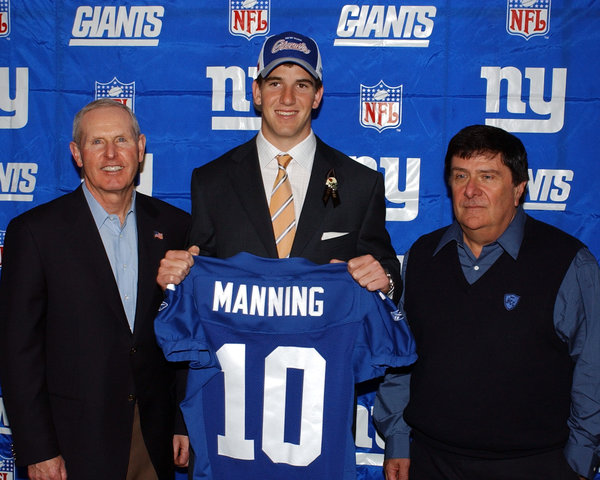 Ernie Accorsi, who made Eli a Giant, never thought he would have a chance to bring Manning to New York, although that was his goal.

Accorsi, then the team’s general manager, watched Manning play in his junior and senior seasons at the University of Mississippi and wrote a scouting report in bold capital letters that read, in part: “Carried an overmatched team entirely on his shoulders … never gets rattled … has courage and poise.”

In a telephone interview Tuesday, Accorsi said: “I also called Eli the complete package, and he was. I did write that he wouldn’t be a fast runner, but I said he had good feet — good enough to get out of trouble like Joe Montana did.”

Which for most of Manning’s early career turned out to be true. But not everyone around the N.F.L. was sold on him the way Accorsi was in the spring of 2004. He had plenty of detractors, especially those who thought his pre-draft status had been elevated primarily because he was the little brother of Peyton Manning.

Accorsi stood firm. The Giants had the fourth overall pick in the draft, but Accorsi made it clear to the San Diego Chargers, who had the first pick, that he was interested in a trade that would net Manning.

On draft day, the Chargers selected Manning. About 25 minutes later, after the Giants had already written down the name of Ben Roethlisberger as their choice, the Chargers called and offered Manning, whose camp had clearly signaled that San Diego’s floundering franchise was not his desired employer.

The deal was done when the Giants agreed to take North Carolina State quarterback Philip Rivers instead and send him to San Diego for Manning. The Chargers would also get three Giants draft picks, including the team’s first-round pick in 2005.

Many N.F.L. draft experts were convinced the Giants had overpaid for Manning — by a lot.

That criticism of Accorsi’s deal only intensified after Manning assumed the starting quarterback’s job as a rookie and lost his first six games.

“I never wavered on him,” Accorsi, who was also the general manager for the Baltimore Colts and the Cleveland Browns, said Tuesday. “I had been through this before with young quarterbacks. John Elway in his first game lined up behind the guard instead of the center on one play. So I understood what was going on. I didn’t expect a lot.”

A Giants playoff season ensued a year later, although Manning stumbled badly in his first postseason game. Two years after that, however, the Giants were hoisting a Super Bowl trophy.

“People always ask me what I saw in Eli when he was young,” Accorsi said. “I didn’t see stats. I saw a leader. I saw championships. That’s what he was brought here for, not stats.”

But if there are numbers that will stick in the minds of current Giants fans when Manning’s name comes up in the future, it will be probably be ones like these: In eight postseason victories on the way to his two Super Bowl Most Valuable Player Awards, Manning threw for 15 touchdowns and was intercepted twice. He also picked himself up off the ground after 20 sacks.

Manning’s declining production in the last several seasons made Jones’s selection in this spring’s draft a necessity and made Tuesday’s decision to name him the new starter an inevitability.

On Tuesday, Accorsi weighed all that and sighed.

“A lot of different things might have happened; there were a lot of good guys in that draft,” he said. “But Eli was the perfect guy for the Giants.” 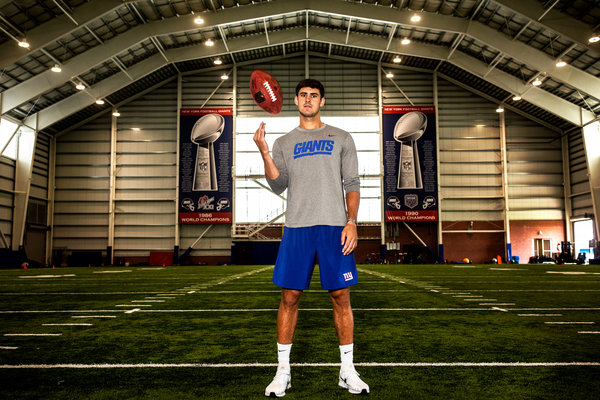 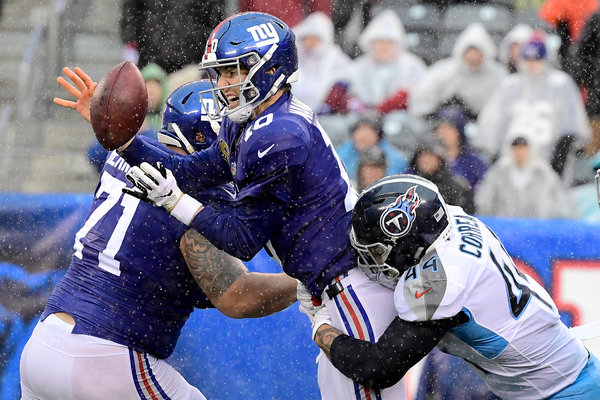