Real Madrid striker Karim Benzema was expected to be included in France’s preliminary roster for this summer’s European soccer championship on Tuesday, a possible signal of the end of the six-year exile of a player who has been publicly critical of France’s coach, its players and its federation in recent years.

The call-up, Benzema’s first invitation to a national team camp since 2015, ends the six-year separation of France’s team and Benzema, one of the world’s best strikers, a split that began with revelations about a sex tape, grew to include accusations of an extortion plot and festered after the player criticized teammates selected over him and accused top French soccer officials of blackballing him to appease racist elements in French society.

Le Parisien reported Monday that Benzema would be on the roster. By Tuesday, multiple news outlets said they had confirmed the news.

Teams have until June 1 to file their final rosters.

Roster sizes have been expanded this year, to 26 players instead of the usual 23, as part of several rules changes related to the coronavirus pandemic.

In another important change, countries are permitted unlimited replacements on their rosters before their first match in cases where a serious injury or illness (including positive coronavirus tests or close contacts requiring isolation periods) renders a player unavailable. But once a player is removed by his team, he cannot be returned to the roster later in the tournament. 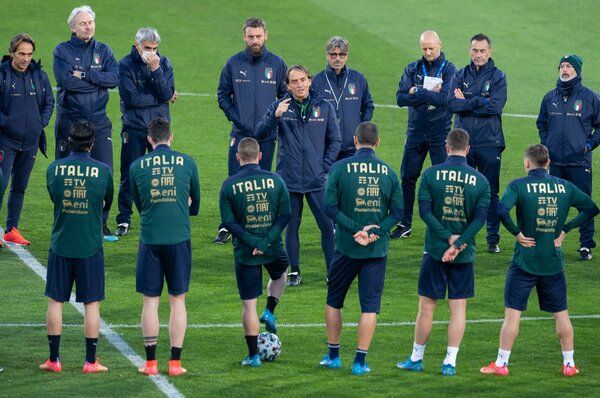 Italy’s 33-player preliminary roster includes the uncapped Sassuolo striker Giacomo Raspadori, 21, and an expected cast of Serie A veterans. But Coach Roberto Mancini has, for now, left off his two Brazil-born Chelsea players, Emerson and Jorginho. Both are expected to be added to the Italy roster after the Champions League final on May 29.

Switzerland has not announced its roster yet.

Led by Milan’s Hakan Calhanoglu, a spine of Premier League veterans and an in-form Burak Yilmaz, who is on the cusp of a French title with Lille, Turkey’s provisional squad could be its strongest in years.

Wales has not announced its roster but it has bigger issues at the moment: Manager Ryan Giggs, the former Manchester United wing, was arrested on charges of domestic violence in April. He has been replaced by one of his assistants, Rob Page.

The provisional squad released on Monday by Manager Roberto Martinez included domestic title-winning stars like Kevin De Bruyne of Manchester City and Romelu Lukaku of Inter Milan, but also the oft-injured Eden Hazard, who might be a difference maker if he is healthy.

Denmark has not announced its roster yet.

Finland has not announced its roster yet.

Russia’s 30-man provisional squad included 13 midfielders but only three forwards. Only four of the players, led by Valencia’s Denis Cheryshev, play for clubs outside Russia.

Austria has not announced its roster yet.

The headline when the Netherlands released its provisional roster was the absence of defender Virgil van Dijk. One of the best center backs in the world, he has not returned to Liverpool’s team since tearing his anterior cruciate ligament in a game against Everton in October.

“I feel physically it is the right decision that I’ve decided not to go to the Euros and to go into my last phase of rehab during the off-season,” he said in an interview with Liverpool’s website. “So the full focus will be on preseason with the club and that’s a realistic goal, so I am looking forward to that.

“I think the decision to not go is the right decision in the grand scheme of things,” he added. “It’s tough, but I’m at peace with it.

North Macedonia has not announced its roster yet, though one name — 37-year-old Goran Pandev — is sure to be on it. Pandev made his national team debut in 2001, when the country was still known as Macedonia. It may not be an actual constitutional violation to leave him out of the squad, but why would you?

Like Russia’s squad, Ukraine’s roster is heavy on midfielders and light on forwards.

A World Cup finalist in 2018, Croatia has never advanced past the quarterfinals at the European Championship. Led by Real Madrid’s Modric, this team might have the talent and the group (England, Czech Republic, Scotland) to end that drought.

The Czech Republic has not announced its roster yet.

England has not announced its roster yet.

Scotland has not announced its roster yet but Sheffield United striker Oli McBurnie won’t be on it. He said Monday that he had sustained a broken bone in his foot, ending his Premier League season and ruling him out of the Euros.

Slovakia has not announced its roster yet.

Spain has not announced its roster, and Coach Luis Enrique appears to be in no hurry. He does not expect to name his team until May 27, only days before the deadline for the tournament.

Sweden has not announced its roster yet but its biggest star, Zlatan Ibrahimovic, is out. Sweden’s coach, Janne Andersson, said a knee injury had rendered the A.C. Milan star unavailable.

Ibrahimovic, who has had an on-again, off-again relationship with Sweden’s national team, came out of international retirement in March after an absence of almost five years, hoping to take part in at least one more major event.

France was to announce its preliminary roster on Tuesday, amid speculation that it would include Real Madrid striker Karim Benzema, who despite his glittering record in La Liga and the Champions League has not played for his country since he was arrested for his role in a blackmail plot of a teammate in 2015.

The French newspaper Le Parisien reported on Monday that Benzema would be named to the early roster by Coach Didier Deschamps, who has steadfastly refused to bring him back to the team for years. Deschamps was stung in 2016 when, in the wake of the blackmail scandal and on the eve of Euro 2016 in France, Benzema lashed out at his exclusion from the squad by charging that the federation had surrendered to “racist” elements in France who did not want him on the team.

Even if he is included, though, it is unclear if Benzema would have a starring role. Antoine Griezmann, Kylian Mbappé, Kingsley Coman, Olivier Giroud and Anthony Martial give Deschamps plenty of options up front.

Germany will announce its roster on Wednesday, but one player has already said he is out: Goalkeeper Marc-André ter Stegen wrote on Twitter on Monday that he would not take part in the Euros so he could get medical treatment on his knee. Ter Stegen, who plays for Barcelona, had been expected to serve as the backup to Germany’s No. 1, Manuel Neuer.

In this group, it’s probably best to get an early look at Hungary before they are gone. They may also become the rare team in the tournament with an M.L.S. player in its traveling party: their new 20-year-old signing, Szabolcs Schön.

Portugal plans to announce its roster on Thursday. Yes, you can rest assured that Pepe will be on it. That other guy, too.