Sherrock, the 25-year-old from Milton Keynes, shot to fame with her exploits at the Worlds where she became the first woman to win a match at the Alexandra Palace.

Life has not been the same since as she is now a staple on the exhibition circuit and in regular demand for interviews. 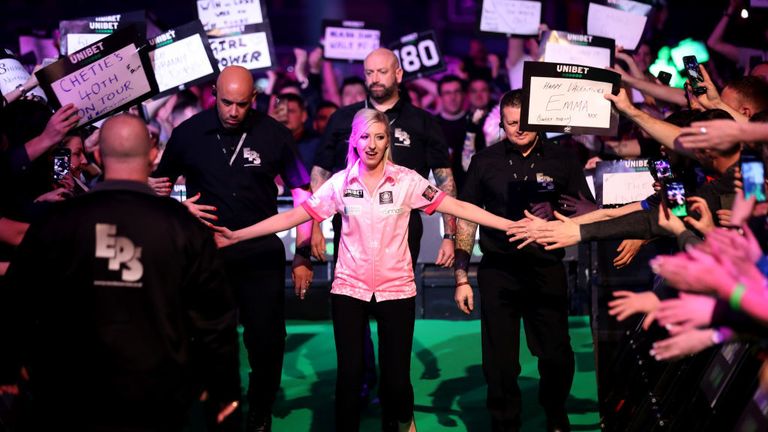 Three-time BDO world champion Durrant was met by a chorus of jeers from the pro-Sherrock crowd at a packed Motorpoint Arena, but once the action started the Middlesbrough man quickly settled into his rhythm.

The 49-year-old had expected to be heavily booed every time he was on a finish, and he wasn’t wrong. He did well to hold throw thanks to D16 in the opening leg.

The former mobile hairdresser settled herself nicely and nailed tops for a superb 14-dart leg before Durrant moved 2-1 ahead after sinking D8.

Durrant, making his maiden Premier League campaign, had admitted he was dreading the match, and Sherrock was showing that she was not going to be overawed in the slightest as she pinned D8 with her last dart in hand.

A neat 14-darter from Durrant put him 3-2 ahead and he missed five darts for a break in the next leg with Sherrock staying calm to find D9. 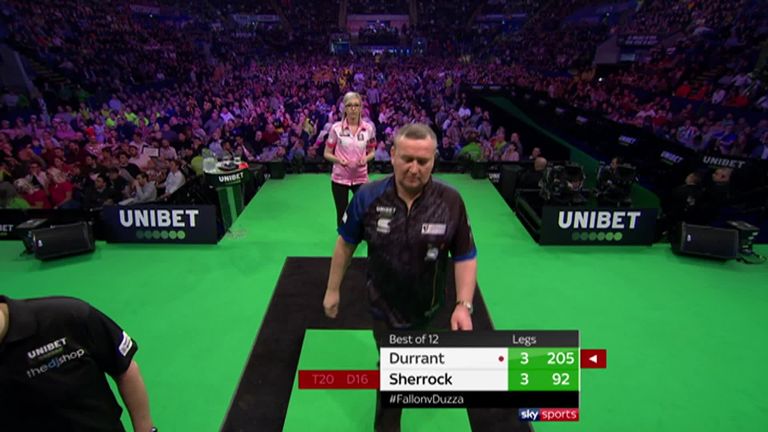 She then turned it on in the seventh leg with a perfectly-timed 12-dart leg, finishing off 92 (Bullseye, 6, D18) to send the arena into pandemonium.

Durrant failed with three at tops to allow Sherrock in and she sunk 60 in two darts to move 5-3 ahead and ‘The Sherrock of Nottingham’ looked to be heading for another monumental victory.

After nine consecutive missed darts at double, Durrant found D16 to move within a leg of Sherrock but three more costly darts at D16 from the Boro thrower gave Sherrock a draw at the very least, which she did by hitting D18.

Durrant held throw in the next leg to send it to the deciding leg in which Durrant dug out 70 for a share of the spoils.