LAKE BUENA VISTA, Fla. — In the opening game of the N.B.A. finals last week, LeBron James of the Los Angeles Lakers toppled to the court after drawing a foul. As soon as he went down, two people wielding large towels sprang into action from behind the basket. They had one job, and it was a vital one: mop up James’s sweat.

In the two-plus months since the league restarted its season at Walt Disney World, the games have been absent a few of their usual components: fans and halftime performers, dance crews and mascots. The focus, as a result, is almost solely on the players — and, on occasion, the team attendants who share the court with them. The spotlight has never burned brighter.

“The whole world,” Mario Casamajor said, “is waiting for me to clean up this wet spot.”

The players seem to recognize the importance of team attendants like Casamajor, 28, and their varied duties inside the league’s bubble. The attendants load and unload gear. They help set up the bench areas. They rebound during warm-ups and at halftime. But nothing they do is of greater consequence than the work they do with their towels and mops. Basketball is a sweaty business, and a wet court is a dangerous court.

“That’s a series-altering incident if someone slips and tweaks something,” Miami Heat forward Duncan Robinson said. “In many ways, they’re the unsung heroes of this whole thing.”

As the N.B.A.’s longest season draws to a close — the Lakers held a 2-0 series lead over the Heat entering Game 3 on Sunday night — the attendants are well aware by now of the players who are most likely to demand their attention. 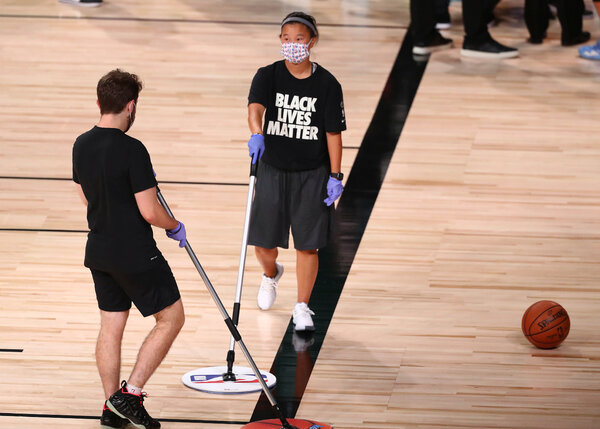 “You have your guys who you know are going to sweat,” said Casamajor, who recently worked as a basketball operations associate for the Iowa Wolves of the N.B.A.’s developmental league.

Among them: Jae Crowder, a forward for the Heat who invites contact, draws charges and makes a big mess.

“After every game,” Crowder said, “I tell those guys: ‘Thank you. Thank you for wiping up all that sweat.’”

The league has put even greater emphasis on the court conditions as a part of the safety protocols initiated by the coronavirus pandemic. Three attendants are positioned behind each baseline during games (as opposed to one or two in nonpandemic times). They wear masks and gloves. They are ready for the joys that await them.

Ellis Dawson, 50, an assistant director for basketball operations with the United States national teams, helped recruit a group of 56 attendants to the restart to rotate among the teams. Only 10 remain. The attendants have been in the bubble for nearly 90 days — “Eighty-two,” Casamajor said last week, not that he was counting — as they assist the players, make connections and gain experience.

During games, the attendants have three tools at their disposal. They use large brooms to clean the entire court during timeouts and between quarters. They use small circular “sweat mops” — which happen to retail for $352 for a set of two — to make a quick run around the lane after free throws. And they get on their hands and knees with oversize bath towels whenever a player falls down. (The towels, Dawson said, are “more absorbent.”)

“I guess the hard part about it is that it’s a streak and not a puddle,” Casamajor said, “so you have to make sure you fully track it all the way, especially if a guy slid.”

A New York Times analysis of a recent game between the Heat and the Boston Celtics in the Eastern Conference finals revealed that the attendants took the court a total of 76 times — including 42 times when live game action was happening at the other end. In those instances, the attendants averaged about eight seconds per cleaning sequence.

“Just get it done,” said Anthony Kresse, 23, a team attendant who is on loan from the Milwaukee Bucks, “and be quick about it so you don’t get run over.”

It takes teamwork. If one attendant is furiously addressing some form of sweat spillage or drippage, the others are keeping an eye on the players in case there is a turnover or a quick shot that will send players dashing back to their end of the court.

“We usually just shout, ‘Run!’” said Alexis Besinaiz, 27, who recently worked as the director of basketball operations for the women’s team at the University of Nevada, Las Vegas.

There have been no reported collisions.

They are also observant. Some players perspire more than others. Whenever Joel Embiid of the Philadelphia 76ers or Khris Middleton of the Bucks attempted free throws, the attendants knew to take special care with their moisture abatement techniques. Others with ample drippage: “The guys with beards a lot of the time,” Casamajor said.

The Eastern Conference semifinal series between the Celtics and the Toronto Raptors was particularly intense, with bodies splayed across the court on many possessions. As a result, the attendants were on high alert, especially when Marcus Smart was in the lineup for Boston.

“You know Marcus Smart is going to be on the floor,” Casamajor said. “So you almost need to track him because he’s going to dive for every loose ball.”

If Casamajor is on cleanup duty, he wears calf-length tights under his shorts so that he can easily maneuver around on the court from his knees. He also wears a fitness tracker.

“You just know you’re going to hit your activity goal,” he said.

In addition to the six attendants who patrol the baselines, four others are assigned to either team’s bench area to help with anything the players need, from drinks to towels to heating pads.

For the Lakers, James and Danny Green use specific types of tissues to wipe their faces during timeouts. James, Casamajor said, favors a heftier material that is more like a paper towel. Mike Mancias, James’s longtime trainer and a member of the Lakers’ staff, ensures that he is well supplied. Green’s tissue situation is more complicated.

“You’re always trying to track it down,” Casamajor said. “Like, ‘Where’s Danny Green’s tissue box?’ It’s usually at his seat or someone else took it. But we want to make sure Danny Green has his tissue box for when he sits down.”

“I appreciate cleanliness, especially these days with the virus going around,” Green said. “Cleanliness is next to godliness, you know.”

There are also small moments when the attendants — through no fault of their own — figure into the dynamics of the game. Casamajor recalled an episode when a star player tried to call him onto the court to wipe up a wet spot just before an opponent was about to shoot a free throw.

“In that case, you wait for the ref to signal you,” Casamajor said.

With their time winding down, Casamajor and his co-workers said they had enjoyed their time in the bubble. They cited some perks, including hotel living.

“I haven’t had to clean anything in three months,” Kresse said.

Except for the court that everyone is watching.