Flora Duffy of Bermuda wins gold in the women’s triathlon. 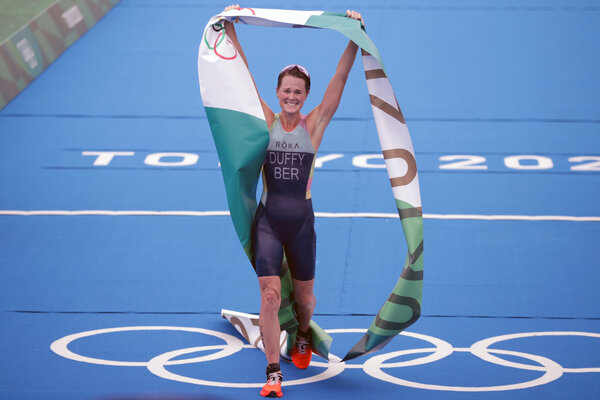 In a sport where transitions are everything, Flora Duffy is the best of the best.

Duffy, 33, one of two athletes representing Bermuda, took home gold in the women’s triathlon event, completing the 1,500-meter swim, 40-kilometer bike ride and 10-kilometer run in 1 hour 55 minutes 36 seconds. She crossed the finish line by herself, more than a minute before Georgia Taylor-Brown of Britain and Katie Zaferes of the United States finished, and greeted her competitors with open arms.

It was the first gold medal for Bermuda at the Olympic Games, and only the second medal in the country’s history.

Duffy is the only person to win three triathlon world titles in the same year, capturing the World Triathlon championship race, the Xterra world championships and the ITU Cross world championships in 2016. She came in eighth place in the 2016 Olympic Games. In 2018 she collected the gold medal in the Commonwealth Games.

In an interview earlier this year, Duffy said heat, humidity and water temperature would be the biggest variables. And her prediction proved correct, as athletes battled 80-degree temperatures and 90 percent humidity.

Duffy, who lives and trains in Boulder, Colo., began competing in triathlon when she was 7. Her training regimen includes six swims a week, six bike rides a week and four to six runs.

On Monday, Kristian Blummenfelt of Norway took home gold in the men’s triathlon. Blummenfelt, who was in fifth place after the swim and bicycle portions, finished in 1:45:04.