Folau the leader? Online armies show way to stop game in its tracks

All the pros and cons, all the careful reasoning, all the angels dancing on the head of a pin came to nothing. The Israel Folau comeback was punched in the nose by people power.

You would say this was rugby league’s GameStop moment, except that it’s not a new thing in sport for the public to orchestrate their emotions effectively enough to change policy. Returned membership cards used to literally turn up in the mail; switchboards used to, if not melt down, certainly seize up. Never forget the Rabbitohs uprising, where the corporate machine had to bow to the man and woman on the street. Sports have always had to be responsive to their public, or else they will fail. You might say that the New York Stock Exchange, where the little guys revolted against the GameStop short-sellers, had its NRL moment. 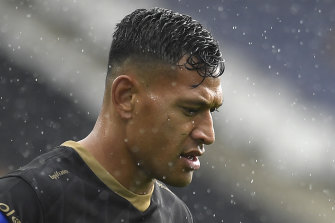 The backdown also averted history from its inevitable repetition, when Folau next quotes some offensive passage of scripture. I don’t belong among those who depict him as a deceitful, untrustworthy person who would not keep his word to remain silent on matters of sexuality. From what I understand, Folau is literally helpless before the teachings of scripture as his church interprets it. He never thought he broke an agreement with Rugby Australia to remain silent, because he never thought he could have made such an agreement in the first place. In his view, he was simply repeating what he thought his Bible said.

He emerged from his settlement with rugby feeling reinforced in his evangelicalism, and no football contract is going to stop that. So best for the game that it doesn’t repeat rugby’s mistake of thinking it had a deal when it did not.

In case rugby league gets a ricked neck from dodging all those bullets, however, the public reaction against a Folau return creates a new set of difficulties.

For whatever reason, religion and sexuality excite passions with a singular force. Norm Black, one of the Dragons’ sponsors, might have a point when he says league has accepted players who have beaten and cheated on their partners, who have stolen and damaged property, who have taken drugs and peed in public and attacked taxi drivers and violated shutdown rules and pretended to have sex with poodles – so why should it reject a humble preacher who quotes his Christian Bible? Rugby league is a broad church, so why can’t it be broad enough to accept a church?

The answer to Mr Black is that people don’t take to the streets to protest against common criminality. Memberships are not cancelled because of property damage in a hotel room. Religion, on the other hand … well, you’d have to have lived under a rock not to know what religion has motivated.

And yet, for the governing body trying to ride this mechanical bull, there must be some understanding of the quantum of public response needed to change policy. How many actual individuals are still so incensed about Folau that they will protest his return? Five thousand? Ten? Fifty? Two? Who are they? Real rugby league fans who will truly desert the game, or just noisy outsiders? Should the number of emails and Tweets and social media posts on a given day override matters of principle? If so, how many is a critical mass?

When rugby union dumped Folau, the quantifiable revolt was from sponsors. Rugby Australia could measure the dollars it would lose if it didn’t take action. Then chairman Cameron Clyne judged that the professional game was facing extinction. It wasn’t a choice requiring a nuanced view.

But for other sports, when the public does mass around certain emotional issues, it’s not so clear-cut. Cheating is another hot button. Nearly three years ago, Cricket Australia received thousands of messages and threats from people who would never watch the national team again after Cape Town. Action was taken, but it still weighs heavily on the national body when it contemplates return the captaincy to Steve Smith.

Did people desert cricket permanently after Sandpapergate? Or did that gate open, only for few to go through? Despite all the shock and horror, there was no discernible drop in grassroots participation, viewership or long-term financial support. It helped that the national team undertook some redemptive work, but most now recognise that that was cosmetic repair. 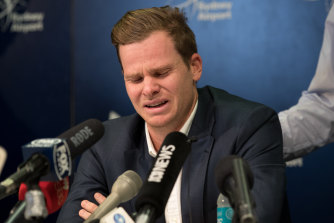 The actions of Steve Smith, David Warner and Cameron Bancroft in South Africa did little to temper Australia’s love affair with cricket.Credit:Janie Barrett

Another reading of the story is that people were outraged for a while, some left, some stayed and accepted the bad taste in their mouth, many didn’t care, and eventually the whole thing became a sorry episode in history. It still affects Australians, but how many did it drive away from the game?

Nobody is game to use Folau as a test case, but there is a hypothesis that by shutting the door on him, social media outrage is allowed to take the place of good policy. Many in Australian workplaces are familiar with this: someone comes into a meeting, says ‘Socials have gone berserk’, and everyone panics. Few ask whether ‘socials’ are a reliable proxy for a wider public. Few measure how many actual people are actually going berserk. It’s easier to be reactive than to stand against the tide and ask why.

Folau himself would seem pretty much finished, but there will be other issues that arouse Folau-level passions. Will sporting bodies always back down if they receive enough nasty emails? Will the social media coordinator continue to rule policy? And if that is their pattern of behaviour, how vulnerable are they to mischievous orchestrated campaigns, their own GameStop?

If you wanted to make any sporting organisation react to your agenda, you wouldn’t need more than a few thousand. It’s tremendous leverage given to a modest sample. (bear in mind that rugby league is a game where if Phil Gould says it on Friday night and 10 people like it on Twitter, it’s in the rule book by Monday.) Everyone turning their back on Israel Folau ought to get ready, because they have given awesome potential to the next online army.

Sports news, results and expert commentary delivered straight to your inbox each weekday. Sign up here.