From Athens to Tokyo, Allyson Felix’s Journey to the Olympic Record Books 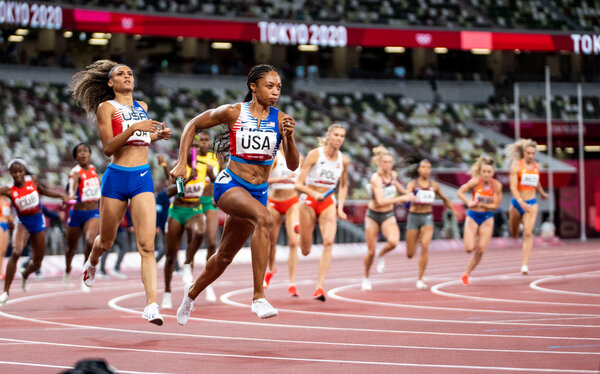 TOKYO — Allyson Felix had made her mark, collecting so many titles and winning so many races as the most celebrated female athlete in American track and field. By Saturday night, her accomplishments were officially unparalleled in U.S. track, and she found herself in a familiar position at Olympic Stadium: atop the podium with a gold medal draped around her neck.

But Felix, 35, was not alone. She was joined by three teammates who had run the 4×400-meter relay with her earlier in the evening, and the symbolism was not lost on Felix, a fierce advocate in recent years for female athletes, for mothers and for gender equality.

“To be surrounded by these women in that moment was really special,” she said.

In her final race as an Olympian, and on the final night of track and field at the Tokyo Games, Felix went out as a champion, saving her crowning achievement for last. She won her 11th medal, which made her the most decorated American track-and-field athlete in Olympic history, surpassing Carl Lewis, the sprinter and long jumper who won 10 between 1984 and 1996.

“I just came out really at peace and wanting to soak it all in,” Felix said.

It helped, she said, that she had “complete confidence” in her teammates, a collection of luminaries, present and future. Felix acknowledged that the race — specifically, the 3 minutes and 16.85 seconds that it took the American team to circle the track four times — felt like a generational passing of the torch.

Sydney McLaughlin, who turned 22 on Saturday, and Dalilah Muhammad, 31, joined forces after going head-to-head this week in the final of the 400-meter hurdles, a classic race in which McLaughlin edged Muhammad at the line to break her own world record. Athing Mu, a 19-year-old phenomenon from New Jersey, had won the 800 meters with a dominant performance days before.

And there was Felix, of course, who reiterated that these would be her final Olympics. She first competed at the Athens Games in 2004, when she won the silver in the 200 meters as a fresh-faced prodigy. Only later in her career would she become an icon who transcended the sport.

“I was definitely inspired by her throughout my entire career,” Muhammad said.

“This was a once-in-a-lifetime opportunity,” McLaughlin said.

“I think it was awesome,” Felix said.

Felix suggested that her success in Tokyo had been fueled in part by the skeptics who questioned whether she could vie for another medal at her fifth Olympics, after giving birth to her first child in 2018.

“I think I had to go through the challenges and the fights, and I’m absolutely where I’m supposed to be,” she said.

Her 10th medal had come Friday night in the women’s 400 meters, the first bronze of her Olympic career. She was doing interviews in the press area when the women from the Jamaican 4×100-meter relay team interrupted her: They wanted hugs. Faith Kipyegon of Kenya, who repeated as the women’s 1,500 meter champion, found her for a photo that she posted on Instagram.

“Mothers are strong!” Kipyegon wrote in the caption.

On Saturday, the American team was also unusual because none of the women are 400-meter specialists. But the result of the race was never in question. McLaughlin ran the first leg to put the U.S. in front with Poland, then passed the baton to Felix, who gave the Americans the lead by themselves. By the time Muhammad circled the track and made her handoff to Mu, the other seven teams were in a different prefecture. Mu ran her 400 in 48.32 seconds, which was the fastest leg of anyone in the entire field.

On the podium, Felix closed her eyes and tried to embrace the feeling.