Home » Sport » From bat flips to bunts, baseball’s ‘unwritten rules’ can be a challenge to navigate

From bat flips to bunts, baseball’s ‘unwritten rules’ can be a challenge to navigate

The official Major League Baseball rule book consists of 173 pages (plus a 12-page foreword and table of contents). It can be downloaded from the league’s official website or purchased in hardcover or paperback versions.

But despite everything contained in those 173 pages of official rules, there are many more nebulous unwritten rules that also impact the way the game is played.

Baseball may be a simple game at its core: throw the ball, hit the ball, catch the ball. But when the unwritten rules come into play, baseball can get extremely complicated.

At the risk of committing a violation ourselves, let’s try writing down some of the unwritten rules – and try to figure out why they matter. 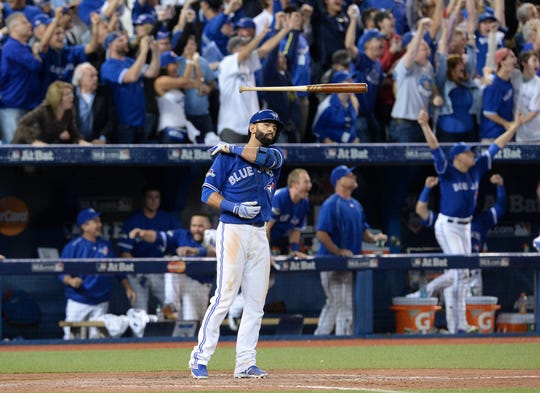 Toronto Blue Jays Jose Bautista flips his bat after hitting a three-run home run against the Texas Rangers during the seventh inning in Game 5 of the 2015 American League Division Series in Toronto. (Photo: Chris Young, AP)

In the course of our unofficial research, unwritten rules tend to fall in one of three categories: superstitious, strategic and disrespectful.

For the most part, the superstitious rules exist because players are inherently worried about luck – both good and bad. Do something to upset the natural flow of the game and you risk the baseball gods showing their wrath.

“One of the golden unwritten rules (is) you don’t talk about a no-hitter when it’s going on,” says Baltimore Orioles outfielder Trey Mancini.

Players in the dugout often go out of their way NOT to mention the number of hits while a no-no is in progress or talk to the pitcher who’s throwing it.

Similarly, it’s bad luck to step on the foul line on your way to and from the dugout. And it’s a common courtesy to tap the catcher’s shin guards in a hitter’s first at-bat of the game.

On the strategic side, two maxims stand out above the rest.

– Never make the first or third out of the inning at third base.

– Don’t use your closer in a tie game on the road.

Both certainly seem reasonable. With a runner on second, you can score a run with a pair of productive outs. With two outs, a runner is just about as likely to score from second on a hit as he would from third.

As for the unwritten rule for closer usage, it may be time to revisit things. Sure, a manager would like to hold a team’s closer for a save situation after taking the lead … but if a game is tied in the ninth inning or later the importance of using a team’s best reliever to avoid losing may be even more important. (Just ask former Orioles manager Buck Showalter how the 2016 AL wild card playoff game turned out.)

The third category is where most of the controversy surrounding baseball’s unwritten rules takes place.

Unlike with the other two categories, if one team violates one of these unwritten rules, the other team frequently feels compelled to administer justice for “not respecting the game.”

“As a player, you have an idea what’s right and what’s wrong,” says San Diego Padres closer Kirby Yates. “There are certain times where you go overboard and some people are going to take offense, but I think everybody understands where the lines are.”

So where are those lines?

Veteran ballplayers will tell you respecting the game means not showing up your opponent. If you hit a homer, you’re expected to put your head down and circle the bases calmly and quickly.

The veteran San Francisco Giants left-hander thought Muncy was a bit too slow getting out of the batter’s box after hitting a Bumgarner fastball 426 feet into McCovey Cove. And he let Muncy know about it before the Dodgers slugger had even reached first base.

Fortunately, the disagreement didn’t result in a beanball war, but merely a few choice words between the two (including Muncy’s memorable “get it out of the ocean” quip).

With the ball in their hands to begin every at-bat, pitchers have a tendency to take the administration of justice in their hands as well. Occasionally, it means a fastball under the chin or into a batter’s backside.

“Sometimes a message has to be sent, but I don’t think anybody ever wants to be a part of that,” Yates says.

The only recourse a hitter has is to do damage with the bat.

Lovely night for a stroll …

Hoskins’ home run trot took 34.2 seconds – the longest ever recorded by Statcast since tracking began in 2015.

Even worse than a slow trot around the bases is an emphatic flip of the bat after hitting a home run. Pitchers just hate that.

Perhaps the most famous bat flip in recent memory was by Jose Bautista of the Toronto Blue Jays, who drilled a tie-breaking three-run homer in Game 5 of the 2015 American League division series against the Texas Rangers.

In such an important situation, many major leaguers had no problem with Bautista’s celebratory flip.

“I remember in the playoffs, it seems like every hit you get you’re getting fired up like that,” says Padres first baseman Eric Hosmer, who won a World Series with the Kansas City Royals in 2015. “It’s emotion you can’t control.”

But the Rangers didn’t buy that line of thinking. And they didn’t forget.

The following season, when the Jays and Rangers met again, Bautista was involved in a little scuffle at second base with Texas infielder Rougned Odor. 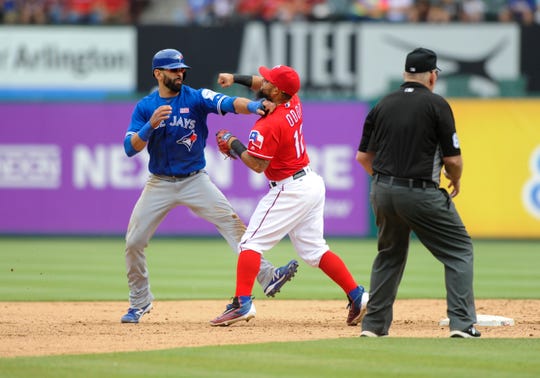 – Don’t bunt to break up a no-hitter.

Bunting for a base hit is a smart play … unless your team doesn’t have a hit yet. Then, it’s disrespectful to the game.

After a minor leaguer bunted for a hit in the ninth inning on June 5, the benches emptied after the game due to the unwritten rules violation.

One of the more memorable instances in the majors came in 2001, when Arizona Diamondbacks pitcher Curt Schilling took a perfect game into the eighth inning.

The San Diego Padres only trailed 2-0 so their first baserunner would bring the tying run to the plate. Catcher Ben Davis broke up the perfecto with a bunt single.

This is the baseball equivalent of “don’t run up the score.” However, the turbocharged offensive environment in today’s game means no lead is ever truly safe.

"I have no problem (swinging 3-0),” Hosmer says. “We had a really crazy series in Colorado so anything can happen.”

The Padres and Rockies set a record earlier this season by combining for 92 runs in a four-game series.

Pitchers are notoriously protective of the mound area. They don’t want to see their manager walking toward it. And they certainly don’t want opposing hitters to come near it.

Remember the Alex Rodriguez incident in 2010? He was running on the play and had already rounded second when a ball Robinson Cano hit landed foul. Instead of retracing his steps and returning to first, he took the most direct route through the infield.

That didn’t sit well with A’s pitcher Dallas Braden, who famously told Rodriguez, “Get off my mound!”

A-Rod claimed afterward he never knew about that unwritten rule. But upon further review, he may have needed a refresher course.

Come to think of it, Rodriguez was a violator of several unwritten rules. He once yelled at two Toronto Blue Jays converging on an infield popup and infamously slapped Red Sox pitcher Bronson Arroyo’s glove while trying to beat out an infield single.

The biggest problem with baseball’s unwritten rules is when messages get mixed. MLB’s latest marketing campaign contains the slogan, “Let the kids play,” in an effort to highlight how much fun players – especially the young ones – are having on the diamond.

But that kind of fun can run afoul of the game’s longstanding unwritten rules.

“It’s such a gray area,” Mancini says. “Everybody’s emotional when they play baseball. We all want to do well and we’re all going to show emotion. I don’t have a problem with guys showing emotion at all.”

But there will still be players who get out of line. And pitchers who will retaliate.

“I think the game has a good way of policing itself. When guys feel like they mess up, the game does a good job of cleaning it up,” Hosmer says. “You never want to see guys get hit, especially on purpose, especially how hard these guys are throwing these days.”

The bottom line is to remember that it’s just a game and not take everything so seriously.

“I think everybody’s having fun and that’s the main thing,” Yates says. “If I was a hitter and I hit a pretty good home run, I’d probably look at it for a little bit. But if you’re a pitcher and you don’t like it, you throw a better pitch.”