Aussie superstar Stephanie Gilmore says she’ll be riding for her spot on the World Surf Tour when she meets Hawaiian rival Carissa Moore in the quarter-finals at Bells Beach.

Gilmore was one of four Aussie women to move into the final eight at the Rip Curl Pro after winning her round of 16 heat against Jan Juc rookie India Robinson. 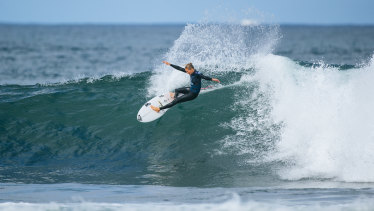 The victory was significant for Gilmore, who sits 14th in the world this season and is fighting to move into the top 10 to avoid the mid-season cut after the Margaret River Pro.

The women’s tour will reduce to the top 10 ranked surfers – plus two wildcards – mid-season as part of a World Surf League (WSL) initiative that, in part, ensures the sports stars meet more frequently head-to-head on the big stage.

“It was a crucial result for me,” Gilmore told The Age on Wednesday.

“I’m sitting pretty low on the rankings and [with] these mid-year cuts, every single heat is just as important as the next. 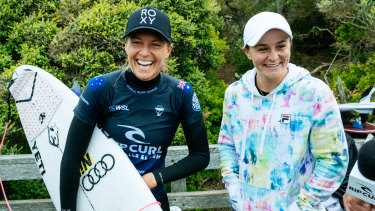 “That was a tough one. I knew India, being a local girl, would have all that local knowledge, and she’s a really strong surfer so I had to really be on my game, on my wave choice, and try and make sure my manoeuvres were really strong because she’s such a good surfer.”

But Gilmore has such a strong affinity with Bells. A seven-time world champion, she has won at Bells four times and finished runner-up on three other occasions. But her next opponent – Moore – is also a three-time champion at the event.

“We’ve had some great heats together,” Gilmore said of Moore.

“I’d say she’s the strongest in the world right now, she’s surfing better than ever, and she’s a [Olympic] gold medallist. She’s definitely the hardest in the draw to beat.

“It’s good to sort of meet those surfers earlier on because then you can try and knock them out. I actually had her number last year, the two times I surfed against her, I beat her. She’s made the cut, so she’s comfortable, so I’ll go into this knowing full well I need this more than her, and I’ll use that as some good motivation.”

Gilmore said it was tough surfing with the mid-season cut hanging over her head.

“When you’re making the cut, you don’t mind it, but when you’re not, you’re hating it,” she admitted.

“It’s one of those things. My whole career I’ve had that luxury, once I’ve qualified for the tour I got the whole season on tour, and I think the surfers that work their way through the Challenger series and earn their spot on tour, they should be able to have an entire season and not half of it.

“I don’t think it’s favoured by a lot of the surfers. Surfing is a tough sport because, ideally, we’d have perfect waves for everyone in every round, but that’s not the nature of surfing. It’s tough, I don’t know. It’s not favoured, that’s for sure.”

Sally Fitzgibbons also continued her run at Bells. After surviving elimination on Tuesday, she beat Malia Manuel in the round of 16 to set up a quarter-final heat against Courtney Conlogue. Tyler Wright and Bronte Macaulay also progressed into the quarter-finals to set up and all-Aussie clash.

The men’s round of 32 is likely to get underway on Thursday, which will include Mick Fanning up against world No.1 Kanoa Igarashi.