Home » Sport » Graeme McDowell, After a Down Spell, Is in the Hunt for a 2nd U.S. Open Title

Graeme McDowell, After a Down Spell, Is in the Hunt for a 2nd U.S. Open Title

PEBBLE BEACH, Calif. — Tiger Woods was looking to get one victory closer to Jack Nicklaus’s record 18 major titles. Brooks Koepka was aiming to become the first man to three-peat at this tournament in over a century. Phil Mickelson was trying to become just the sixth golfer to complete a career Grand Slam.

As play got underway Thursday at the United States Open, the weight of history hung in the air.

Then in the morning, another potential milestone blew into view. Graeme McDowell, who won the tournament the last time it was at Pebble Beach, in 2010, carded a bogey-free, two-under-par 69 to stand three strokes back of the early leaders, Rickie Fowler, Xander Schauffele and Louis Oosthuizen.

With a victory, McDowell, 39, would become the first man to win the U.S. Open twice at the same venue since Jack Nicklaus at Baltusrol in 1980 — and the third over all. Willie Anderson won the Open four times at the start of the 20th century, twice at the Myopia Hunt Club.

With Koepka, Woods and Mickelson attracting most of the attention, McDowell said he thought he might be able to stay out of the spotlight this week. Then the tee times came out. He was grouped with Mickelson and the 2016 U.S. Open champion Dustin Johnson, who has twice won the regular tour event at Pebble Beach.

“I was looking for an under-the-radar grouping, but I didn’t really get it,” McDowell said with a laugh.

Then again, he said: “I felt like it was all eyes on those two guys out there today. I was just plodding around, doing my thing. There were a few people cheering for me but not many.”

McDowell found himself joining a chorus voicing their approval of Johnson on the par-4 eighth hole after he chipped out from thick rough to inside three feet.

McDowell said he had told Johnson, whose touch around the greens helped him scramble to a 71: “I feel like I’m watching Dustin Johnson’s greatest ever up-and-down moments today.”

At the 2010 Open here, McDowell witnessed one of Johnson’s bigger down moments in the game. They were together in the final pairing that Sunday, Johnson with a three-stroke lead at the start of a roller-coaster round. It ended with Johnson shooting an 82 to blow the door open for McDowell, who staggered to victory with a 74.

On Thursday at Pebble, there was considerably more history in the air than wind, which in the morning, especially, was negligible. The first wave of 78 players took advantage of the benign conditions, producing 23 scores below par. 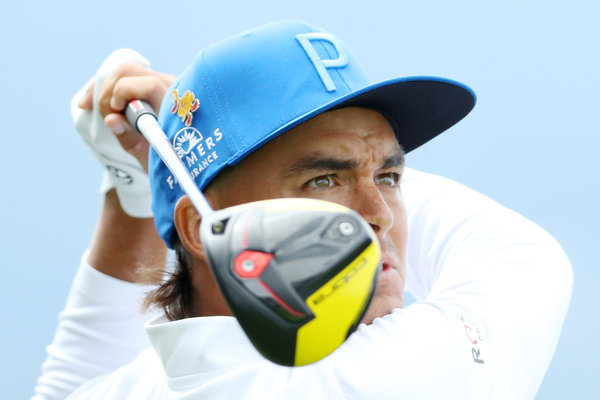 Rory McIlroy started on the 10th hole two groups ahead of McDowell, his Northern Ireland compatriot, and posted a 68. It was McIlroy’s first opening round in the 60s at the U.S. Open since he won it in 2011.

McIlroy, who is coming off a victory at the Canadian Open, which he secured with a closing 61, said, “I think just confidence and comfort is sort of what I got from last week.”

McDowell tied for eighth at the Canadian Open, securing his top-10 finish with a 30-foot par putt on the final hole. That also guaranteed him a berth in next month’s British Open at his hometown course, Royal Portrush.

From a world ranking of 257 in March, McDowell has climbed to No. 101. In late March, he won on the PGA Tour — at the Corales Puntacana Resort and Club Championship — for only the third time since his U.S. Open triumph.

But it was a tournament that he sat and watched from his couch that most contributed to his fine play of late.

When Woods won the Masters in April and walked off the 18th green on Sunday into the arms of his two children, McDowell got a lump in his throat. As the father of three, including two under the age of 5, McDowell could relate to Woods’s joy at seeing his children celebrate his success.

“That was really special,” said McDowell, who added that he had to get out his U.S. Open trophy to show his younger children, because they didn’t believe he had won it.

“It’s something that certainly motivates me,” he said, “to have my children see me doing well and winning big events again.”

McDowell said he felt nervous before his opening shot at the 10th tee. But then he looked over at Mickelson, and he could see the strain there. “He was so intense, it made me feel less intense,” McDowell said.

Mickelson carded a 72 with two birdies and three bogeys. He missed four birdie putts on his first nine, and he knows they could come back to haunt him.

Mickelson, who won the regular Pebble Beach tour event in February, added: “The good news for me is I’m playing really well. It’s the best I’ve played in a long time, certainly since the start of the year. If I’m patient, I’ll get better as the week goes on. The goal is just to get within striking distance for Sunday.”