Home » Sport » Houston Hangs On and Reaches the Final Four

Houston Hangs On and Reaches the Final Four

INDIANAPOLIS — Once upon a time, the Southwest Conference was where football ruled and renegades roamed. It was a land of envelopes stuffed with cash, sham jobs and recruiters bearing more gifts than Santa Claus. At one point, six schools were on N.C.A.A. probation, Southern Methodist football was suspended for a year, and the string of scandals ensnared even a governor of Texas and a Texas A&M trustee who was a part owner of the Dallas Cowboys.

The league was also where nobody paid much attention to basketball.

The Southwest is long gone, a victim of its own excesses and the musical chairs of conference realignment, its members scattered across the college landscape. But for those who might carry some nostalgia for those wild (south)west days, the Final Four is going to pull at the heartstrings the way boosters used to pull out wads of cash.

Two camps of the diaspora will come together in one national semifinal on Saturday after Houston ended a remarkable run by the No. 12 seed Oregon State with a 67-61 victory in the Midwest regional final on Monday. The No. 2-seeded Cougars will play the winner of Monday’s South regional final between Baylor, now in the Big 12, and Arkansas, now in the Southeastern Conference.

The Cougars, who are in the Final Four for the time since 1984, blew a 17-point halftime lead but steadied themselves when Quentin Grimes hit a 3-pointer from the top of the arc with 3 minutes, 21 seconds left, putting them ahead to stay.

The Cougars (28-3), who rallied from a 10-point, second-half deficit to beat No. 10-seeded Rutgers in the second round, have navigated a wrecked bracket, facing the 15th, 10th, 11th and 12th seeds. Their latest opponent, Oregon State (20-13), was trying to become the lowest seed to reach the Final Four.

Houston has a rich basketball history, dating to the 1960s when Elvin Hayes fueled a team that threatened U.C.L.A.’s dynasty and carrying through to the mid-1980s, when the high-flying Phi Slama Jama teams — led by the future Hall of Famers Hakeem Olajuwon and Clyde Drexler — went to three consecutive Final Fours, losing back-to-back title games. 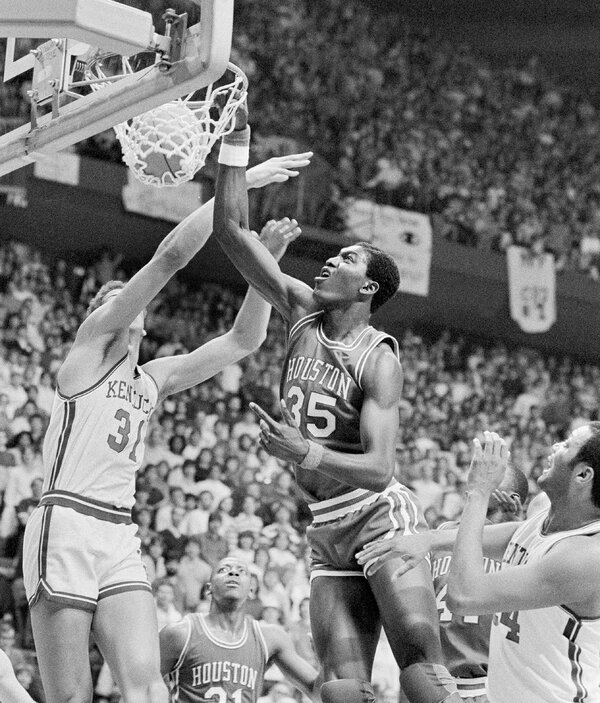 Much has happened since then. Little of it has been good for the Cougars.

Relegated to Conference USA once the Southwest disbanded in 1996 and then moving to the American Athletic Conference, Houston had little success fulfilling its athletic ambitions to rival big brother schools like Texas and Texas A&M.

One swing, though, has paid off — hiring Kelvin Sampson, a sage but scandal-ridden coach. He drew the financial backing of Tilman Fertitta, the restaurant and casino mogul who owns the Houston Rockets. He poured $20 million into a campaign to renovate the Cougars’ Hofheinz Pavilion, now known as the Fertitta Center.

Sampson, who in 2018 led Houston to its first tournament-game victory in 34 years, now has the Cougars in position to win their first championship — and he would do it as an outsider.

The only team from outside the Power 6 conferences to win a championship since U.N.L.V. in 1990 was Connecticut in 2014, after its first season in the American after spending decades in the Big East. Houston fits that profile well with a band of transfers and overlooked talent.

Six Cougars, including four starters, began their careers elsewhere — none more prominently than Grimes, an acclaimed recruit who marked his arrival in college basketball at Kansas by scoring a game-high 21 points in a win over a Michigan State team that ended up in the Final Four.

But Grimes, not as comfortable as he wanted to be, returned home to Houston.

Sampson has been able to pitch a track record of development, burnished by six years he spent as an N.B.A. assistant, though that stint was essentially an exile after he landed Oklahoma and then Indiana on probation for violating N.C.A.A. rules.

If Sampson has rarely had elite talent, he has consistently built winners around hard-nosed ballplayers who build a fortress around the basket they are defending. In his 27 previous seasons as a head coach — at Washington State, Oklahoma, Indiana and Houston — that had been good enough to regularly reach the N.C.A.A. tournament but for just one trip to the Final Four, in 2002 with Oklahoma. The backcourt pair from that team — Hollis Price and Quannas White — are on his staff with the Cougars.

They were surely nodding with approval on Monday night as the Cougars took space away from Oregon State’s floor full of shooters and eventually stole their will. Price and White had to be particularly pleased with DeJon Jarreau, a sinewy 6-foot-5 guard who, like them, is from New Orleans.

A transfer from Massachusetts, Jarreau had 10 points, 8 assists and 8 rebounds, but his best work may have been on defense. He badgered Ethan Thompson, who had scored 48 points in the previous two games and had been particularly adept at getting to the free-throw line, where he had made 25 of 26 shots in the tournament. On Monday, Thompson was limited to 11 points, though he contributed 7 rebounds and 6 assists to fuel Oregon State’s late charge.

The Beavers had flourished in freewheeling games in the tournament’s opening weekend, racing past fifth-seeded Tennessee and then knocking out fourth-seeded Oklahoma State, a popular Final Four dark horse that had the presumptive No. 1 overall N.B.A. draft pick, Cade Cunningham.

But the Cougars’ harassment cut off passing lanes and forced the Beavers into the uncomfortable position of trying to beat quicker defenders off the dribble. That inevitably led to turnovers, which fueled transition opportunities for Houston, and though the Cougars didn’t shoot particularly well, their activity on the boards (19 offensive rebounds) was handsomely rewarded. Houston led by 34-17 at halftime.

The Beavers’ zone defense became more active after halftime and befuddled Houston, and Oregon State was also far more adept at keeping the Cougars off the boards. Steadily, the Beavers climbed within striking distance for a final charge. It came when Gianni Hunt banked in a 3-pointer to tie the score, 55-55, with 3:40 left.

But Grimes answered with his 3-pointer, which was the Cougars’ final basket before a series of free throws. That proved to be enough.