Ramogi Huma, a former college football player, had been at a Justice Department lectern for eight seconds when he began an excoriation of the National Collegiate Athletic Association.

The governing body of college sports was, he declared, “a predatory economic cartel that treats players like university property rather than people.”

Huma had long used similar language as the leader of the National College Players Association, an advocacy group. But his 2019 speech to a roomful of antitrust experts at the Robert F. Kennedy Building signaled a shift in Washington. Less than a decade earlier, Huma recalled, federal law enforcement officials had told him that the capital’s political climate did not support action against the N.C.A.A. Now he was being invited to speak on Pennsylvania Avenue.

“More and more people find what the N.C.A.A. is doing is just patently unacceptable in terms of their treatment of athletes,” said Senator Cory Booker, Democrat of New Jersey, who played football at Stanford University and has championed a proposal that would compel colleges to share athletics profits with some players. The association, he added, was “not realizing the moral view of this has really grown or shifted.”

The N.C.A.A. is embroiled in perhaps the most crucial stretch of its long relationship with Washington, where top government officials have increasingly voiced doubts about the management and restrictions of college sports.

On Wednesday, the 115th anniversary of the N.C.A.A.’s founding under pressure from President Theodore Roosevelt, the Supreme Court will hear the association’s appeal in a case about caps on certain benefits for student-athletes. This summer, around the time the justices could announce their ruling, a Florida law is scheduled to take effect and allow players to profit off their fame, disrupting the uniform rules that have regulated college athletics for generations. 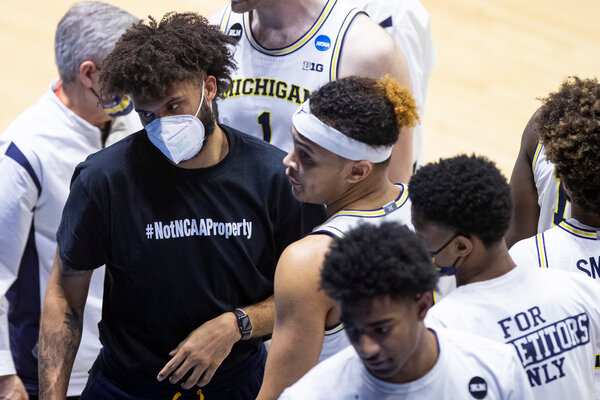 Those potentially seminal developments were brewing before this month’s N.C.A.A. basketball tournaments demonstrated unequal treatment between the men and women competing in them, prompting new outrage from members of Congress. And, encouraged by Huma, star athletes at both tournaments called attention to what they condemned as overly restrictive N.C.A.A. rules that have remained in place even as the industry’s financial might swelled.

The confluence of events could ultimately push Washington toward a few outcomes, including national protections for student-athletes or sustained scrutiny on the N.C.A.A. from Capitol Hill and the Justice Department. What lawmakers say is already clear, though, is that the N.C.A.A.’s political standing has eroded in recent years, diminished by protracted internal debates and bipartisan, coast-to-coast pressure for changes that benefit athletes.

N.C.A.A. officials contend that they are still a force in Washington and that they are committed to new rules to allow players more financial opportunities, especially through social media platforms where many athletes command large followings. Change has been slow, however, because of the association’s byzantine design and because the Justice Department, in the waning days of the Trump administration, expressed misgivings about the N.C.A.A.'s plans.

The association’s president, Mark Emmert, acknowledged in an interview this month that there were “significant concerns about some of the dynamics in college sports right now, and that’s neither inappropriate nor unfair.” But he bristled at more than a year’s worth of assessments by current and former lawmakers, regulators and college sports executives that the N.C.A.A. had become less formidable in the capital.

“We’re talking about these issues, working them through, trying to make sure everybody understands the views of the universities that are the members of the association,” said Emmert, who noted that he had spoken with a senator perhaps an hour earlier. “Are there disagreements? Of course. Are we open to the input, thoughts and ideas of members of Congress? Of course.”

The N.C.A.A. has long been a favored target for frustrated fans, incredulous boosters and, from time to time, senators. But only in the last few years has the association also become such a lasting political target, a status it has been especially unable to shake since 2019, when California passed a law to allow players to pursue endorsement deals and hire agents. The measure, scheduled to take effect in 2023, passed unanimously and amounted to a direct challenge to the N.C.A.A.’s restrictions on players.

After California’s move, elected officials elsewhere — some motivated by moral outrage, others perhaps by the prospect of losing a prized recruit to a California school, and just about all sensing an issue that defied traditional partisan lines — joined the chorus demanding new rules. Confronted with a sea of statehouse uprisings, the N.C.A.A. shifted its focus toward Washington and promised its own changes.

There has been significant reason to seek federal intervention: Different rules from one state to another, N.C.A.A. officials warned, would allow some universities to dangle better benefits toward recruits and give certain schools unfair advantages. But some in college sports also believed that buttoned-up Washington could be something of a safe harbor, especially compared with restive state capitals where the N.C.A.A.’s concerns were being proudly defied.

In Washington, though, some prominent lawmakers were wary after years of delays and mixed signals from college sports leaders. They were hardly ready to shut out the N.C.A.A., many said, but the association would not go unquestioned.

“There’s no question that the N.C.A.A. has a lot of power,” Representative Lori Trahan, Democrat of Massachusetts, who played volleyball at Georgetown University. “I know my office and I have had plenty of communication with them. But what you’re seeing right now is a bipartisan recognition that the current system is broken, it has been for a long time, and it needs to be fixed.”

Lawmakers, she added, feel “like they’ve got a role to play in all of this. Would we have liked the N.C.A.A. to come up with a proposal that met the need and met the inequity? Of course.”

Senator Chris Murphy, Democrat of Connecticut, noted that it was “kind of impossible for them to represent the interests of both Auburn and Amherst,” but suggested that the sprawl of the N.C.A.A, which includes about 1,100 colleges and universities, left its message muddled and inconsistent.

“The power of the status quo in this debate is going to flow directly through the schools and conferences, not the N.C.A.A., and I think the N.C.A.A. has made it pretty clear that they are not able to articulate a consensus point of view but that they’re also not terribly interested in policing student safety and student economic rights,” he said.

Although the N.C.A.A. has a lobbying presence in Washington, powerful leagues have increasingly stepped up their efforts to shape policy. Federal records show that the five most influential leagues in college sports — the Atlantic Coast, Big Ten, Big 12, Pac-12 and Southeastern conferences — combined to spend more than $1.7 million on lobbying in 2020, up from $300,000 in 2019.

Emmert, a former professor of political science, suggested it was a savvy approach, not a measure of the N.C.A.A.’s clout, for leagues to try to lobby officials who might be particularly affectionate toward their brand-name schools. Others in college sports agreed that a conference-driven lobbying strategy could certainly be good politics, but that it also reflected serious concerns about the N.C.A.A.’s influence.

“The N.C.A.A. blue disc is toxic in some quarters in Washington, D.C., but I would suggest that not all of that is fair,” said Bob Bowlsby, the Big 12 commissioner, referring to the association’s logo. “The analogy with Congress is spot on: Everybody loves their congressman but hates Congress, and everybody loves their school, but they hate the N.C.A.A.”

With the N.C.A.A. sometimes proving “a problematic brand,” Bowlsby said, “we, obviously, want to have our own representation.”

That notwithstanding, the N.C.A.A. still has powerful allies in Washington. Until recently, Veterans Affairs Secretary Denis R. McDonough and Vivek H. Murthy, the surgeon general, sat on the association’s board. When McDonough left the board last year, Robert M. Gates, who led the Pentagon for parts of the George W. Bush and Obama administrations, took his place.

Legislators are careful not to question the personal integrity of N.C.A.A. leaders. But in a twist that many government and sports officials laughingly acknowledge, the United States Congress has wound up complaining about another organization’s sluggishness.

Some lawmakers say that the N.C.A.A.’s current proposal, which would allow students a regulated opportunity to profit off their fame, falls far short of expectations.

Although Democratic proposals have drawn most of the attention, especially now that the party controls both chambers of Congress and the White House, Republicans have offered measures that would give student-athletes greater autonomy but impose more limited checks on the N.C.A.A.’s power.

Senator Jerry Moran of Kansas, who led a hearing last year that drew Bowlsby, Emmert and Huma, did not respond to an interview request, nor did Representative Anthony Gonzalez of Ohio, who introduced a bipartisan proposal during the last Congress and was the only Republican lawmaker to address the N.C.A.A. convention in January.

“The thing that I’m always balancing in my head is, how do we extend student-athlete rights as far as we can without jeopardizing the system over all?” Gonzalez, who played football at Ohio State University, said in that appearance.

A crucial question now is the timing of any federal action. Some legislators, like Booker and Trahan, believe that the emergence of new state laws will encourage Congress to act quickly, perhaps as soon as this summer.

But lawmakers said the White House had shown only limited interest so far, and Murphy predicted the matter would not go before the full Senate before the end of 2021.

“Realistically, this is not on the top 10 list of the House or the Senate right now,” said Murphy, who said he was unbothered by the possibility of varied state laws coming online.

And while the Justice Department sided with the former athletes whose case, N.C.A.A. v. Alston, No. 20-512, will go before the Supreme Court on Wednesday, the department is widely seen as unlikely to take additional quick action on college sports in the opening months of a new administration. Even before the transfer of power, the government was not close to bringing an antitrust case against the N.C.A.A., according to two former law enforcement officials who spoke on the condition of anonymity to discuss confidential deliberations. The department declined to make Richard Powers, the acting assistant attorney general for its antitrust division, available for an interview.

“We were created through a political process,” Donald M. Remy, the N.C.A.A.’s chief legal officer, said. “It has been the case since then that the public trust of college sports has drawn the interest of federal, regional, state and local policymakers.”

On that much, at least, the N.C.A.A. and its critics and skeptics agree.