Home » Sport » ‘I had to be brave too’: Alexander reveals her Diamonds rev-up

‘I had to be brave too’: Alexander reveals her Diamonds rev-up

Australia netball coach Lisa Alexander got to celebrate her century of Test matches with a win over New Zealand, but it was only after the match that she revealed how.

The Diamonds beat the Silver Ferns with a 48-42 win in Auckland on Wednesday night, bouncing back from a first-up Constellation Cup loss to level the series at 1-1. 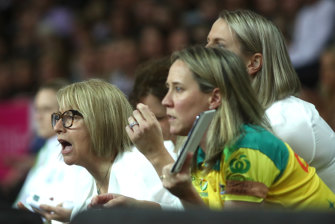 Diamonds coach Lisa Alexander (left) changed it up ahead of the second Constellation Cup clash, and a personal milestone.Credit:Getty Images

"And they were all looking at me. Especially C-Bass [captain Caitlin Bassett] as she's seen every one.

"I did something different because I wanted to demonstrate to the players that they needed to be brave out there and I had to be brave too."

Alexander took the tone down.

"I didn't want the players thinking 'Oh we have to play well for Lisa'. No," she said.

"You have to play well, because it's important for Australia.

"That's very heartfelt to me because I didn't play for Australia so I want them to make sure they take every opportunity to put everything into every match.

"So I did a poem in the rooms and I did a meditation … a breathing technique and centring. Just talking about a few things that are really positive, because that's what you have to get you have to get that positive mindset to perform.

"And we actually were inspired by … and don't tell [the Silver Ferns] that, Ritchie McCaw's movie.

"We had a little clip of that too, when he talks about the moments … we're very struck by that. You know how inspirational that is to us."

Gretel Tippett was an all-action goal attack, ably supported by Bassett and Tegan Philip, while Courtney Bruce was the star of the showdown with five intercepts.

The series now heads to Australia for two matches with the Cup on the Diamonds' terms.

"We've put ourselves into a great position for this for the rest of the series," Alexander said.

"We can go home and land and feel like winners."

Related posts:
Alexa, Be, brave, had, I, to, too
Celebrities