In one sentence, Hector Pardoe was able to encapsulate the brutality of open water swimming.

The 20-year-old from Wrexham took a stray elbow to the eye while making his Olympic debut in the marathon swimming, a gruelling 10km race in the waters of Odaiba Marine Park in Tokyo.

Flailing limbs, unwanted sea creatures and unbearable chafing are occupational hazards for an open water swimmer, but even by those standards, this was unusual.

With the way his eye had puffed up and already started turning a deep shade of purple, it looked as though Pardoe had gone a few rounds with Anthony Joshua.

He explained what had happened: “On the last lap I took an elbow to the face, I thought I’d lost the eye. My goggle completely snapped off and I couldn’t see a thing. I always think that whenever I get an injury that I’d be able to finish the race but my goggles completely fell off and I couldn’t get them. When you get hit, it goes all blurry so I was waiting for it to come back. It swelled up and I didn’t realise how bad it was.

“I couldn’t see anything and I thought my eye had fallen out in the water. I was going up to the lifeguards saying ‘My eye, my eye, is it ok?’.”

Fortunately for Pardoe, the medics checked him out and reassured him that the eye was indeed ok.

Ironically, fellow competitors were not even the biggest concern for the marathon swimmers competing in Japan. Much had been made of the Nomura’s jellyfish that have taken over the waters in Tokyo Bay, giant 2m-long creatures that can weigh up to 200kg and whose sting can lead to severe swelling and sometimes even death.

The reeds and ducks of the Serpentine, the venue for the event at London 2012, seem tame by comparison with some of the sea life around the world.

Pardoe had already voiced his own concerns about the umbrella-shaped creatures before the Games, having had a harrowing experience at the European Junior Championships in Malta back in 2018 from which he still has the scars.

Add in the searing heat – the water was 29 degrees – and it made for desperately difficult conditions for the swimmers, even those who avoided an elbow to the eye.

“It was really hot, I noticed my heart rate was really high on the first lap when I wasn’t even pushing that much,” said Pardoe, his race live on Eurosport and discovery+.

“It’s nothing I’ve ever really experienced before, I think the hottest I’ve ever done is 23 degrees, so to jump to 29 was really difficult.”

She was able to complete her race, finishing in 19th, as the demands took their toll.

“I’m pretty broken. It was really hard, a really tough race,” she said. 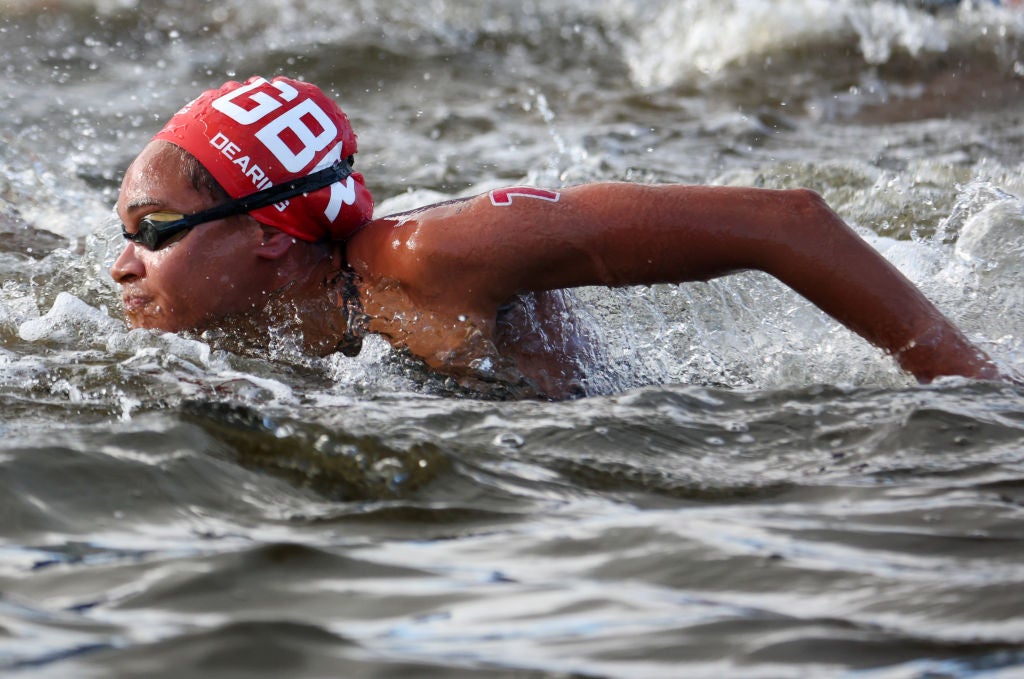 The 24-year-old was metaphorically broken, Pardoe a little more literally.

And yet both have already turned their attentions to doing it all again in Paris in three years’ time.

Even as the swelling on his eye continued to grow, Pardoe said: “This isn’t going to be a setback, it’s going to be more motivation. I’m going to get my head down for the next three years. I’ll have a break first, have a nice holiday after this and then get my head down and grind and hopefully get back to it in Paris and try and challenge for the medals.”

Dearing, meanwhile, is a trailblazer looking to inspire a generation of black swimmers.

“I just want people to know it is open and available to you, regardless of your race and your background,” she said.

“If you don’t know how to swim, get in and learn to swim. If you want to go to the Olympics, give it your best shot – don’t let anyone tell you it’s not for you. Go chase your dreams if that’s what you want to do.”

Pardoe chased his and came away with a black eye for his troubles. But that won’t stop him getting back into the water. Marathon swimmers really are a different breed.

Stream every unmissable moment of Olympic Games Tokyo 2020 live on discovery+, The Streaming Home of the Olympics.